Scientists with the charity Butterfly Conservation believe they have solved one of nature's long-standing mysteries — thanks to the help of the public. 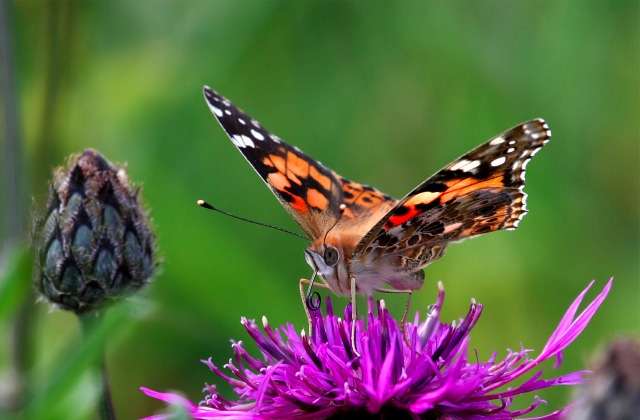 Every year Painted Lady butterflies arrive in the UK from North Africa and the Mediterranean. It has long been known that they breed here during the summer and also that they cannot normally survive our winters. What happens to these Painted Ladies as winter approaches was uncertain until now.

Scientists had been baffled as to whether Painted Ladies attempted to "tough it out" and died trying during our winters. Or was there a return southward migration to warmer climes, as is the case with Swallows, Cuckoos and Red Admiral butterflies? Part of the problem has been that, unlike these other well-known migrants, there was very little evidence of Painted Ladies flying south in the autumn.

This summer was a bumper migration year with, at the peak, up to a billion Painted Ladies in Britain. Butterfly Conservation has been monitoring Painted Lady movements since the start of northward migration at the beginning of the year, with members of the public being able to report sightings online at www.butterfly-conservation.org. There has been a huge response, not only from the UK but from across Europe. An amazing 12,000 sightings have been submitted so far, with reports still coming in.

Last month brought some particularly exciting reports. From the Channel coasts of Cornwall, Devon, Sussex and Kent sightings were reported of Painted Ladies heading straight out to sea towards continental Europe. Now reports have been received of butterflies arriving back in the Mediterranean and North Africa.

Richard Fox, Butterfly Conservation's surveys manager, said: "Several of these lucky observers saw more than one butterfly head out on its perilous voyage. This is exactly the evidence needed to lay this enduring mystery to rest. Painted Ladies do return southwards from Britain in the autumn enabling the species to continue its breeding cycle during the winter months".