Mark makes it back, but where are his mates?

The RSPB is encouraging farmers, birdwatchers and walkers to keep a look out for Montagu's Harriers, the UK's rarest breeding bird of prey, after recently discovering the bird's African wintering grounds for the first time.

In 2014, only eight pairs of Montagu's Harrier are known to have nested in the UK and it is essential that the small number of breeding attempts made this year are identified and protected from accidental damage, disturbance or persecution to give these magnificent birds the best possible chance.

From the migration data provided by 'Mark', an adult male Montagu's Harrier that was tagged last summer in south-west England, the RSPB was able to locate the winter grounds of UK birds in Senegal for the first time.

Mark the Montagu's Harrier with his transmitter (Photo: Mark Thomas)

Mark Thomas, who leads on Montagu's Harrier conservation work for the RSPB, said: "For the first time we know exactly where these rare birds of prey go once they leave the UK. The data provided by our tagged harrier, 'Mark', will help us pinpoint our conservation efforts to boost the numbers of UK Montagu's Harrier."

"Now that these birds of prey have survived the journey back to the UK, it is vitally important that we can identify as many nesting spots as possible."

The core population of Montagu's Harrier usually returns to the same nesting areas each year, with 'Mark' returning to the exact same field. The RSPB has been working successfully with these landowners for more than 30 years; however, it is very important that any new or unknown nests are located.

Montagu's Harrier arrive in the UK around May time to nest, before returning to Africa in August. It is possible to spot the breathtaking birds of prey on passage, particularly on the southern and eastern coasts of England.

Mr Thomas added: "The UK population is currently teetering on the brink and we are determined to find out why. Last year, reports to the hotline helped us confirm their presence at some of the traditional nesting sites but we are desperate to locate any new sites and be positioned to help more youngsters successfully fledge."

"Farmers and birdwatchers can really help with the conservation of this threatened species. Now is the best time to witness the adults' airborne courtship before they establish their crop nests and become difficult to spot. If you are fortunate enough to see these breathtaking birds then please contact the hotline to let us know."

Building on last year's work, the RSPB in partnership with the Dutch Montagu's Harrier Foundation and the Sound Approach will be satellite tagging additional birds this year. The tiny satellite trackers, fitted to the harriers' backs, provide real-time data, revealing migration routes and their wintering grounds in Africa.

Montagu's Harriers are striking birds — they are larger than a Kestrel with long wings and a long tail giving them a slender appearance. The males are plain grey, with black wingtips and a white underside. The females are mottled brown with a white rump. They breed in the south-west and east of England on lowland farmland, particularly winter cereals, oilseed rape and field silage. 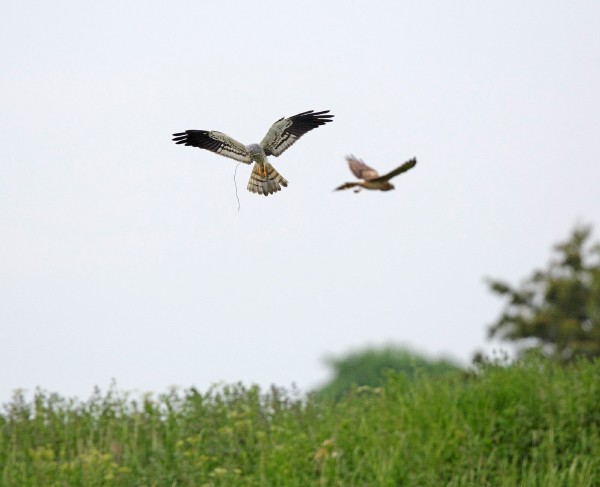 Any possible sightings of Montagu's Harrier can be reported to the hotline on 01767 693398 or emailed to wildlife@rspb.org.uk. Details should include the date, six-digit grid reference if possible and a contact telephone number. All reports to the hotline will be treated in the strictest of confidence.