Marine scientists from the National Oceanography Centre, Southampton, have witnessed a remarkable feeding frenzy of seabirds and dolphins off the Land's End peninsula in southwest Cornwall. The observations were made as part of the SeaWatch SW project. This involves continuous dawn-to-dusk monitoring of all marine wildlife from Gwennap Head at the southwest tip of the UK mainland. The project is now in its fifth year, but this is the first time during the survey that such a large gathering of animals has been recorded feeding in the area.

Project co-ordinator Dr Russell Wynn was on duty at the watchpoint for the first 17 days of the survey from 15th–31st July. He said: "The number of seabirds and marine mammals involved was staggering. In a single hour we counted over 10,000 Manx Shearwaters passing the watchpoint, with several thousand feeding offshore accompanied by hundreds of plunge-diving Gannets." A total of 250 Balearic Shearwater sightings were also recorded at Gwennap Head in July, which represents up to 1% of the world population of this Critically Endangered seabird and highlights the increasing importance of southwestern waters for this species. 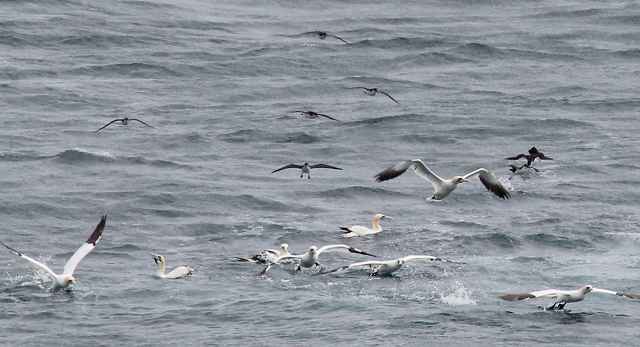 The seabird flock was joined by hundreds of Common Dolphins, tens of Harbour Porpoises and small numbers of Minke Whales and Risso's Dolphins. The survey team are now combining their visual observations with detailed seafloor maps and tidal flow measurements to investigate why these feeding frenzies are concentrated in certain areas. They are also collecting acoustic records of the dolphins and porpoises, which will enable them to assess nocturnal activity. Dr Wynn added: "To see all these animals pursuing Mackerel and smaller bait fish in such a small area was spectacular. The different types of data we have collected will now help us to assess how tide and topography influence the location of these foraging hotspots."

However, a recent incident has highlighted the vulnerability of these large feeding aggregations to oil spills. On 3rd August, a 9000-ton container ship ran aground just offshore of the rocky coast a few miles north of Gwennap Head. Helen Booker, Senior Conservation Officer at RSPB, said: "This near-miss highlights the continuing threat from pollution to our internationally important seabird populations in the western English Channel, which is one of the busiest shipping highways in the world. Luckily there was no leakage of oil during this latest incident, otherwise with such large numbers of feeding seabirds and cetaceans in the area we could have been facing an environmental catastrophe."

The RSPB has also this week expressed concern about the UK Government's potential failure to recognise seabirds as important features in the designation of marine protected areas. Tony Whitehead, Public Affairs Officer for the RSPB in the southwest, said: "Finding Sanctuary have led talks over the past two years on the identification of important marine areas. The place where these huge flocks of seabirds have been feeding has been much discussed. However, we are worried that the UK government may not include the needs of mobile species such as seabirds in the designation of sites. This fails these wonderful creatures and we are strongly urging the UK government to include them."

The SeaWatch SW project involves intensive monitoring of seabirds, marine mammals, Basking Sharks and other marine life off southwest UK between 2007 and 2011. The project is run by scientific researchers supported by a large number of volunteer observers, and is being undertaken in partnership with RSPB and several other conservation organisations. Daily sightings from the Gwennap Head watchpoint can be viewed on the SeaWatch SW website.