The RSPB and Cumbria Police have launched an appeal for information about the unexplained disappearance of a nesting male Hen Harrier in the North Pennines.

The bird, which was nesting at the RSPB's Geltsdale reserve, was last seen at the upland site on Saturday 23 May. He set off hunting at around 7.15am and was last observed by RSPB nest protection staff at around 1pm.

Without the male returning to provide her with food, the female was forced to abandon her clutch of five eggs, resulting in the failure of the nest.

Unfortunately, incubating the eggs from the nest was not an option. By the time RSPB staff were sure that the female had abandoned her nest, and that it was safe to approach it, her eggs had already gone cold and were no longer viable. A 2008 Government-commissioned report found that it was rare in most places for male Hen Harriers to abandon an active nest.

Police are also calling for information after three male nesting Hen Harriers disappeared earlier in the season without explanation in Bowland, Lancashire. Hen Harriers are England's most threatened bird of prey, with just four nests in the country in 2014. 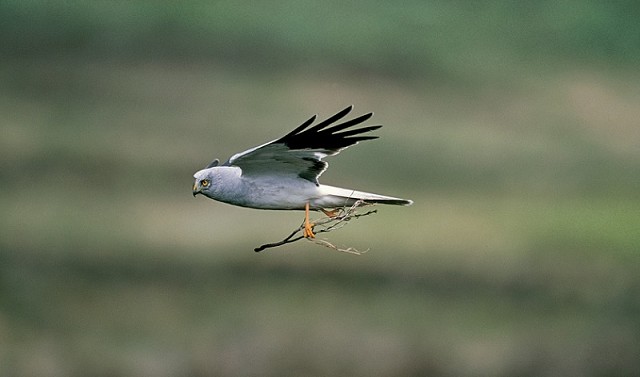 Steve Garnett, upland warden at RSPB Geltsdale, said: "All of the staff and volunteers who were watching the nest around the clock over the past few weeks are absolutely gutted about the disappearance of the male and the failure of the eggs."

Cumbria Police Wildlife Crime Officer Sarah Rolland said: "There is no criminal investigation surrounding the disappearance of the male bird at the current time. However, we appeal to anyone with information to come forward by calling Police on 101, as we are keen to trace the whereabouts of the bird."

Anyone with information about either of the missing birds should contact the police on 101 or, alternatively, call the RSPB's confidential hotline on 0845 466 3636.

Over the next five years, the RSPB is satellite tagging as many Hen Harrier chicks as possible. Part of an EU LIFE+ funded project, this work will enable the organisation follow the birds wherever they go and monitor what happens to them.