A pioneering conservation project to save the world's rarest duck has reached a key milestone well ahead of expectations.

A total of 12 Madagascan Pochard ducklings have been seen at Lake Sofia, a remote site in northern Madagascar where 21 captive-bred ducks, known locally as 'Fotsimaso', were released by conservationists at WWT and Durrell Wildlife Conservation Trust in December 2018. This is the first step in a long-term project to establish a new population.

This thrilling discovery of two broods – of eight and four – has defied expectations, as diving ducks normally breed for the first time at two years old. 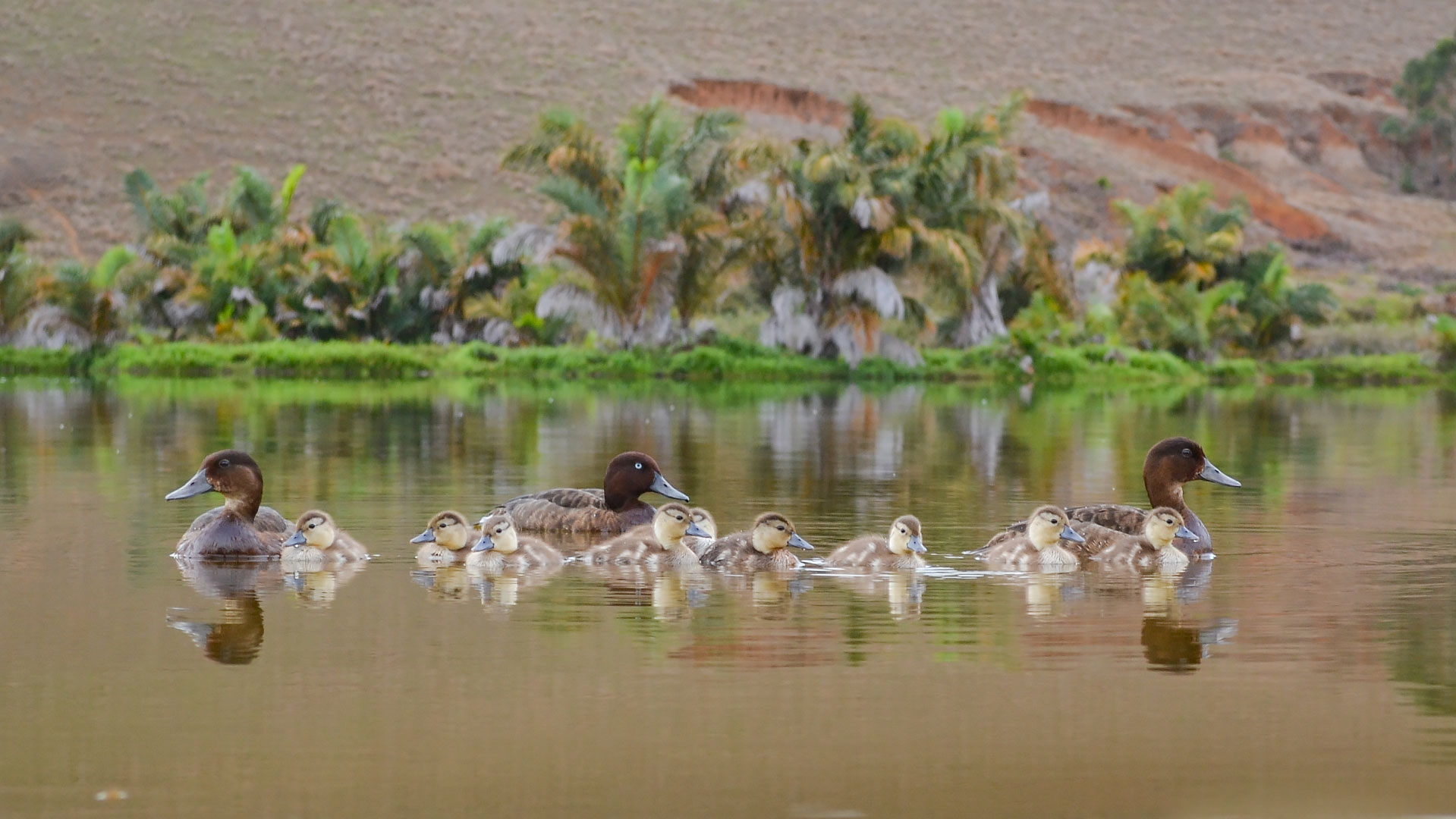 Some of the Madagascan Pochard chicks found recently at Lake Sofia (WWT).

Durrell's Wetlands Manager, Felix Razafindrajao, was part of the team to discover the ducklings and commented: "I am happy and proud, as well as a little surprised, that our released birds have produced ducklings within one year. Despite the release techniques being a world first, it's clear that our methods and the careful preparation and planning have worked to save the Fotsimaso. After much hands-on effort to rear birds in captivity, and to transport and release them at this remote location, it's fantastic to see the ducks take this next critical step for themselves."

WWT's Project Manager Peter Cranswick added: "Reintroduced animals normally take a while to settle into their new site, and first breeding attempts are often unsuccessful, so this is a wholly unexpected but very welcome development. It took several years for the local communities around the lake to give this project to restore the lake and reintroduce pochards their endorsement. Now the ducks have given it their endorsement too!"

The species was thought extinct until a chance discovery by The Peregrine Fund of 20 birds on a small, remote lake in 2006. A rescue mission in 2009 brought the birds into captivity, and a breeding centre was established in Antsohihy, the regional capital. The search began for a suitable wetland that could successfully home a new wild population, and Lake Sofia was chosen.

In 2018, 21 pochards – hand-reared at the breeding centre – were the first released into the wild. With most of northern Madagascar's wetlands severely degraded due to human encroachment, Durrell, WWT, Asity Madagascar and the Aga Khan Foundation, in partnership with the Madagascar Ministry of Environment, have been working to improve the condition of Lake Sofia so that it's not just a suitable home for the ducks, but provides for local communities and other wildlife that depends on it.

Durrell's Project Manager Dr Glyn Young said: "This is a remarkable step in this project to save and restore Madagascan Pochard. When we started in 1989 and found no hope for species' survival until 2006, things looked very bleak. But we never gave up and I am so proud on behalf of our partnership and for all of our Malagasy colleagues that this pivotal milestone offers hope that the pochard may one day be widespread across Madagascar's wetlands." 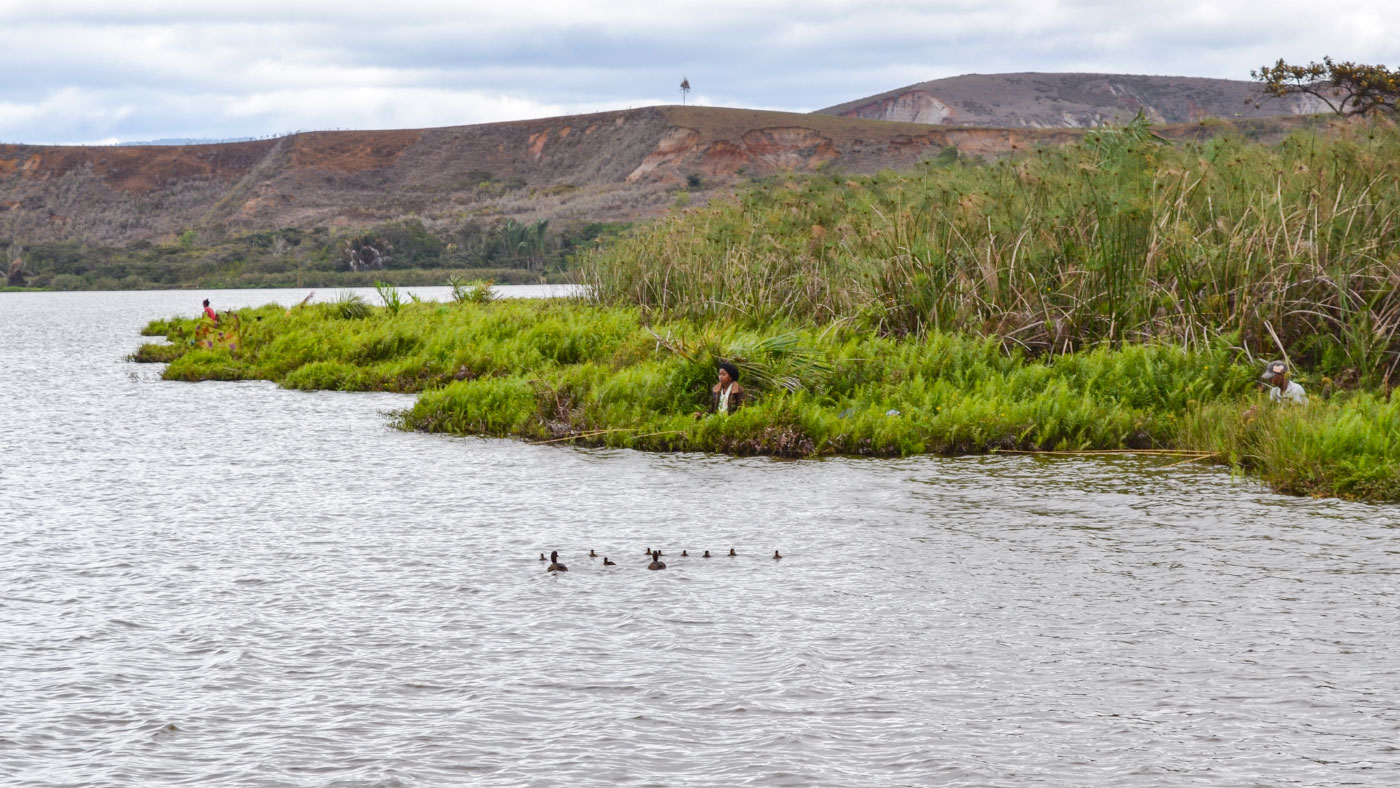 One of the keys to a successful reintroduction will be forging a lasting relationship between the birds and local residents, who use the lake in their daily lives (WWT).

A monitoring team, based at the lake to carefully track the 2018 released pochards for the last 12 months, will follow the ducklings closely in the coming weeks. The young face many challenges, not least to find food in a lake that is in poor condition. Already, they have been observed taking artificial food provided on feeding platforms by project staff. With cyclone season underway, it is crucial that the birds grow and develop their first full feathers that will provide waterproofing and warmth as the weather deteriorates over the coming month.

Restoring Lake Sofia is key to the ducks' survival. This is part of a broad programme of work, to develop sustainable livelihoods for the local communities, so that the lake can flourish and that villagers can still benefit.

Pete Cranswick added: "We celebrate each time we cross a threshold in this project, and the first breeding in the wild is very significant. But it only reminds us that the next huge task has begun, and it will take several years of learning from these birds before we can be confident that we understand their needs fully and how to restore the lake.

"So we are not yet counting our ducklings – there are many challenges ahead, particularly given the adults are young, inexperienced and reared in captivity.

"There is a long way to go – and there will be many setbacks along the way – but this is a major milestone achieved two or three years ahead of schedule!"