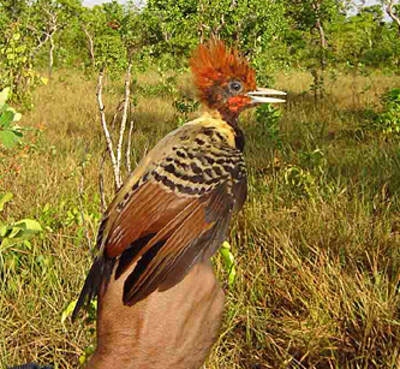 One of Brazil's most enigmatic birds has reappeared after an absence of 80 years. The news of the rediscovery of Caatinga Woodpecker Celeus obrieni has delighted conservationists in the region and gives hope for other 'lost' birds feared extinct in South America.

Caatinga Woodpecker was found by a Brazilian ornithologist Advaldo do Prado whilst surveying in the Tocantins region of Central Brazil. This enigmatic species had not been observed since its initial discovery in 1926.

"Rediscovering birds is what many conservationists dream about," said Pedro Develey IBA Coordinator of SAVE Brasil (BirdLife in Brazil), "There is something truly special about finding a bird that many of us considered 'lost' for so long."

The woodpecker was previously known only from a single specimen collected in Brazil and deposited in the American Museum of Natural History, New York. The specimen was traditionally considered a subspecies of Rufous-headed Woodpecker C. spectabilis also from South America. It wasn't until a recent review by ornithologists involved with the South American Classification Committee of the American Ornithologists' Union concluded that dramatic differences in the plumage of Caatinga Woodpecker warranted full species status.

The new discovery was found approximately 200 miles east of the area where the previous specimen was taken in 1926, suggesting to conservationists that other individuals may lie in similar habitats in the eastern part of Central Brazil. BirdLife International, the official Red List Authority for birds for the IUCN Red List, are to formally propose that Caatinga Woodpecker be listed as Critically Endangered.

"Rediscoveries like this allow us crucial opportunities for understanding behaviour, ecology and for gauging conservation status with a view to creating protected areas within the Tocantins, a region that has suffered in recent years with expansion of agriculture and new road projects." said Pedro Develey.

The new finding comes in the wake of a number of recent bird rediscoveries in Brazil including Golden-crowned Manakin, Rufous-fronted Antthrush, White-winged Potoo, Kaempfer's Tody-tyrant and most recently, Cone-billed Tanager.

"Caatinga Woodpecker and rediscoveries like it provide hope for other South American birds currently missing and feared extinct, some of which haven't been seen for over 150 years." said Stuart Butchart, Global Species Coordinator, BirdLife International and co-author of 'Lost and Found: a gap analysis for the Neotropical avifauna', a recent article on the rediscovery of 'lost' birds.

Data from BirdLife International's Global Species Programme states that Brazil has more globally threatened birds than any other country on earth. Of the 111 species at risk of extinction in Brazil, 98 live in the Atlantic forest, which has been reduced by more than 90% of its original extent.