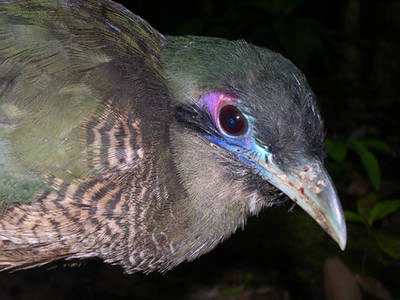 The call of the Sumatran Ground-cuckoo Carpococcyx viridis has been recorded for the first time, giving conservationists further encouragement in efforts to save the elusive bird from extinction.

The recording was made from a lone ground-cuckoo, brought to conservationists from the Wildlife Conservation Society (WCS) after being trapped by local hunters.

"Surveying birds in tropical forests is a real challenge since birds are often hidden from view in dense vegetation," commented Dr Stuart Butchart of BirdLife International. "Knowledge of their calls is therefore a vital aid to surveying, and this recording may help conservationists learn more about the distribution of this secretive species."

"We were extremely lucky to have recorded the bird's unique call," said Firdaus Rahman, of WCS's Indonesia Program. "Our team will use the recording to hopefully locate other Sumatran Ground-cuckoos, and to eventually secure their protection."

In recent decades, recordings of calls from Borneon Ground-cuckoo Carpococcyx radiatus and the rediscovered Gurney's Pitta Pitta gurneyi have both proved invaluable tools for researchers working to map their species distributions.

Endemic to Sumatra, the large terrestrial ground-cuckoo is renowned for its elusive nature, even to experienced hunters. It had not been recorded for over eighty years until 1997, when one was photographed by conservationists working in the region. In 2006, another bird was captured on video in the Sumatran forest by a camera with built-in motion sensors.

The small population of Sumatran Ground-cuckoo is thought to have suffered from extensive habitat loss occurring in the area - at least two-thirds of original lowland forest cover and at least one-third of montane forest has been lost in recent years, primarily to agricultural encroachment. Sumatran Ground-cuckoo is listed by BirdLife International as Critically Endangered.

Currently in the care of conservationists, the cuckoo - nursing an injured foot - will be released back into northern Bukit Baresan Selatan National Park, where it was originally captured.

Hear the call of the Sumatran Ground-cuckoo.