The much-hyped London Garden Bridge has been criticised by the RSPB for being more expensive than many other 'greening' options available for the capital.

The much debated bridge has now been approved by the relevant local authorities with little in its way to prevent the designer's artwork becoming reality. Actress Joanna Lumley is the bridge's chief flag carrier, while landscape designer Dan Pearson is adding his green-fingered expertise to Thomas Heatherwick's design — the latter also designed the Olympic Cauldron and the 'Boris Bus' for the city. 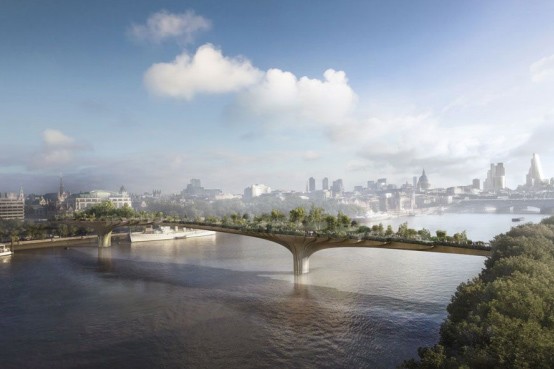 An artist's impression of the London Garden Bridge.

The Garden Bridge will cost an estimated £175 million and will provide a pedestrian-only link from Temple on the north bank with the area close to the 'OXO' building on the south. The promoters have hinted that there may be a ticketing scheme imposed to manage the crowds, so they warn potential users to expect queues. Picnics will not be allowed and groups will be limited to no more than eight people at a time.

From a conservation point of view, the bridge adds little and damages little and the RSPB had cautiously supported the initial concept. Mayor of London, Boris Johnson, has promised to use £30 million of Londoners' money to match fund £30 million from the UK Government, which leaves £115 million to secure. This may be offset by fundraising events on the bridge as it is developed, and 12 days a year have reportedly been set aside for this purpose.

As supporters of green infrastructure in London, the charity has suggested easier and cheaper ways to make life more pleasant for Londoners and urban wildlife. £175 million could do a lot to boost the way we manage water and waste, or generate energy in the capital in ways that would clean our environment and better support some of the 60 per cent of species currently vanishing around us. Indeed, Londoners can collectively add to the capital's habitats and support much more wildlife than this £175 million bridge ever could.

You can do a lot in a small space, so the RSPB is hoping the design will incorporate bat and bird nesting sites alongside suitable habitats for pollinators and other bugs. Water capture and storage as part of a wider drainage initiative would have been a bonus, but better still, it could link existing wildlife spots north and south of the river; however, that isn't currently part of the plans. Londoners will not be gaining a new, wildlife-rich habitat, and consequently the bridge will not receive the RSPB's approval.