The RSPB has said it has been swamped with reports of illegally killed birds of prey since the start of the UK lockdown some six weeks ago.

Among the species killed are Hen Harriers, Peregrine Falcons, Northern Goshawks, Common Buzzards and a Barn Owl. The RSPB added that the "vast majority" of the shootings had connections with shooting estates, or land managed for shooting. The wildlife charity described the crimes as "orchestrated".

Red Kites have been among the birds of prey targeted by criminals during lockdown (Peter Miles).

In normal years, the RSPB expects roughly three or four reports of killed protected species a week – but, since lockdown, they have averaged three or four a day, from a wide range of locations. Head of RSPB Investigations Unit, Mark Thomas, told the BBC it was "like the Wild West" in the countryside.

He added that people who wanted to kill birds of prey had been "emboldened" by the absence of walkers and hikers. He said the surge correlated exactly with the date the lockdown was imposed.

Mr Thomas said: "I am genuinely disturbed. In more than 20 years of investigating, I've never seen anything like it. We are having to put ongoing investigations on hold in order to triage all these reports ... This isn't youngsters with air rifles, but orchestrated wildlife crime." 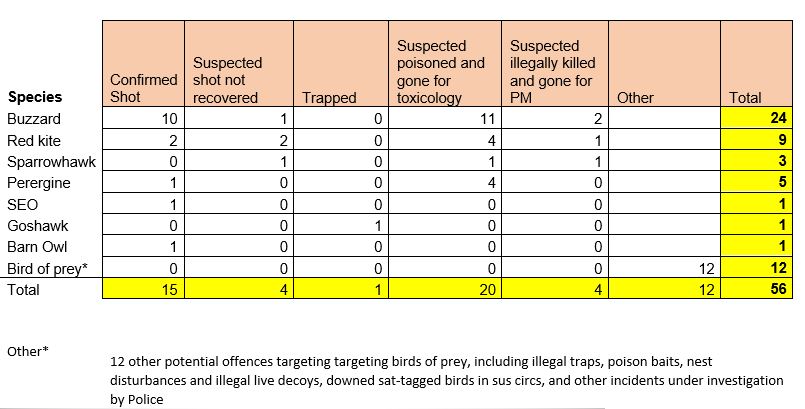 The RSPB's table of persecuted birds of prey during the lockdown period makes for grim reading.

According to the RSPB, on 29 March a Common Buzzard was found shot at Shipton, near York. Its wing was fractured in two places and an X-ray revealed several pieces of shot within the bird's body. The bird recovered and was released. Over the Easter weekend, a Red Kite was found shot dead near Leeds. It had 12 shotgun pellets lodged in its body.

The following weekend, a dead Red Kite was found in Powys, which had been shot. There were also reports of another two shot kites in the region. In another case, in south-west England, 10 Common Buzzards were found, all thought to have been poisoned.

The Investigations Unit suspects that the true number of incidents could be much higher, as there are fewer people out in the countryside who might report cases, with walkers and specialist raptor groups under lockdown.

The Moorland Association, whose members include many shooting estates in England and Wales, said it condemned illegal activity with director Amanda Anderson stating: "The reports we have from our members in the uplands have suggested that many birds of prey are in fact benefiting from the lockdown restrictions and the subsequent reduction in disturbance from members of the public."