Loch of Strathbeg RSPB is playing host to the first pair of Little Gulls ever to breed in Scotland, this also representing just the sixth-ever breeding occurrence in Britain.

The world's smallest species of gull has been confirmed to be nesting in Scotland for the first time, the RSPB announced today. Photos of the birds' nest containing an egg have confirmed the record; the most recent British breeding attempt was in Norfolk in 2007.

There's no confirmed record of Little Gulls successfully raising chicks in Britain, so all eyes will be on this pair. It's hoped that their choice of nesting area at RSPB Scotland's Loch of Strathbeg reserve will help the attempt, as the pair have set up home on the tern nesting island. Along with the protection provided by the island being inside a fence, RSPB Scotland staff will mount a 24-hour watch and use cameras to protect these rare birds.

The nest was discovered late last week, and the reserve's drone — usually used for monitoring the establishing vegetation on the recent renovation work — caught images of the nest including a single egg on its video camera. RSPB staff say they expect the birds to hatch their first chick any day now. 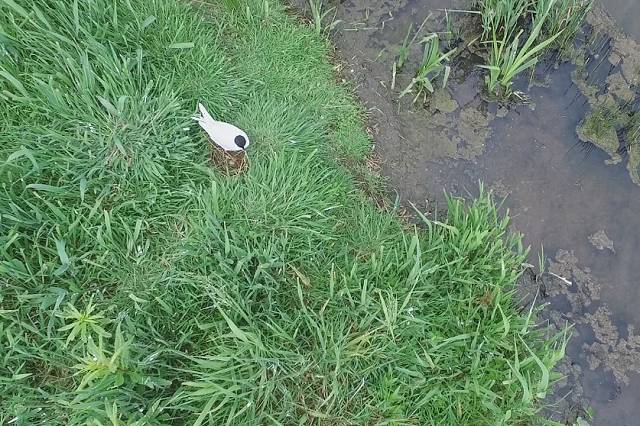 This aerial shot of one of the adult Little Gulls and its egg is a video grab taken from the reserve's drone (Photo: RSPB)

Richard Humpidge, RSPB Scotland Sites Manager, said: "We're really excited to have these smashing little birds nesting on the reserve. A few years back, we did a lot of work on our tern nesting island, reshaping it and adding 10 tons of shingle and shelters, as well as installing a fence around the edge of the pool to prevent access [by] ground predators.

"It's been a great success: four years ago there were just 10 pairs of Common Terns and they failed to raise any chicks. The next year there were 60 pairs, and this year we have 130 pairs and their eggs are just starting to hatch. It's great that the Little Gulls are using the same area and we hope that it will also give them the protection they need to raise chicks when their eggs hatch shortly."

Little Gull is the smallest species of gull. Weighing not much more than a Blackbird, breeding adults have jet black heads with a small dark bill, short red legs and dark smoky grey underwings that are unmistakable when the birds are in flight.

There have been two previous potential breeding records north of the border, when very young juvenile birds were seen in 1991 and 1988, both in eastern Scotland. However, the origin of these birds remained unconfirmed, and they may have fledged on the Continent. England and Wales have seen five confirmed breeding attempts.

The pair of Little Gulls near their nest at Loch of Strathbeg in May 2016 (Photo: RSPB)

For people hoping to catch a glimpse of what has immediately become Scotland's rarest breeding bird, visitors can get great views of the nesting island through the sheltered viewing screen next to the car park, although the visitor centre at Loch of Strathbeg is still closed for renovations. For more information about how to get to the reserve visit rspb.org.uk/lochofstrathbeg.