Lesser Florican could be extinct 'within five years'

A new paper has outlined the dire plight of Lesser Florican, one of Asia's most endangered birds, suggesting that it could be extinct within the next 5-10 years if nothing is done to save it.

Written by Nigel Collar and published in the Oriental Bird Club's BirdingASIA bulletin, the report cites a general lack of awareness of just how serious the situation is for the species, which is now almost completely confined to India and may number just 250 breeding males.

It also makes clear that the lack of state commitment of resources to save Lesser Florican has been "negligable when it should be massive", adding that much of the work already invested in the species has been funded by external organisations (such as BirdLife International) or grants.

Collar also cites a lack of coordination to blame for the florican's demise. Despite calls for a centrally planned conservation programme almost a decade ago, three different captive-breeding programmes are now being organised in the states of Gujarat, Rajasthan and Madhya Pradesh, which Collar argues as "overkill" and suggests that habitat restoration and the establishment of Community Conservation Areas are far more pressing at this late stage. 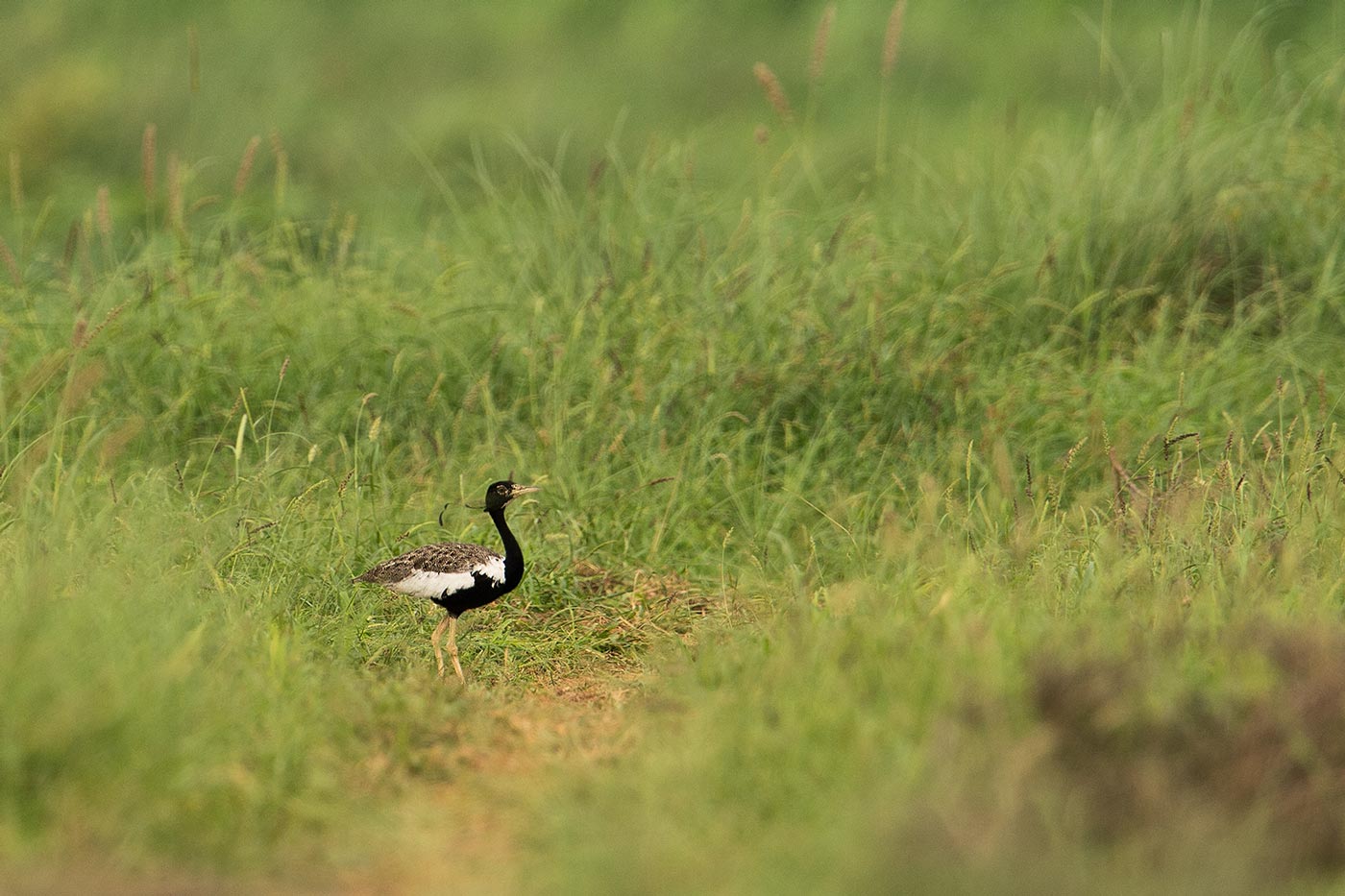 Lesser Florican is the smallest member of the bustard family and the sole member of the genus Sypheotides. Breeding males sport a distinctive black-and-white plumage and perform an unusual display, which involves a 'fluttering jump', producing sounds with its wings as it does so, in a fashion reminiscent of Little Bustard. Females, with their cryptic plumage and elusive nature, are seldom observed, and it is for this reason that population estimates are generally quoted on the number of displaying males encountered. Despite its small and rapidly declining population, Lesser Florican is still listed on the IUCN Red List as Endangered, although this is likely to be revised up to Critically Endangered very soon.

The author suggests that if Lesser Florican is to be saved from extinction, a "military operation" is required to be rolled out immediately. The species's population is now so low that a particularly bad drought could more or less wipe it out entirely – such dry conditions caused the population to crash from 4,374 in 1982 to 750 in 1989 – and every effort is now required to increase numbers.

Collar gives the example that Gujarat's Blackbuck National Park – a 34km2 protected area that now hosts 14,000 of its namesake mammal, which is in no danger of extinction – could be managed to become a bastion of Lesser Florican conservation. The park and its immediate environs currently hosts around 100 displaying male floricans, some 40% of the entire world population, and "rapid rethinking" of habitat management within the park could quickly bolster its florican populations without any lasting impact on Blackbuck. 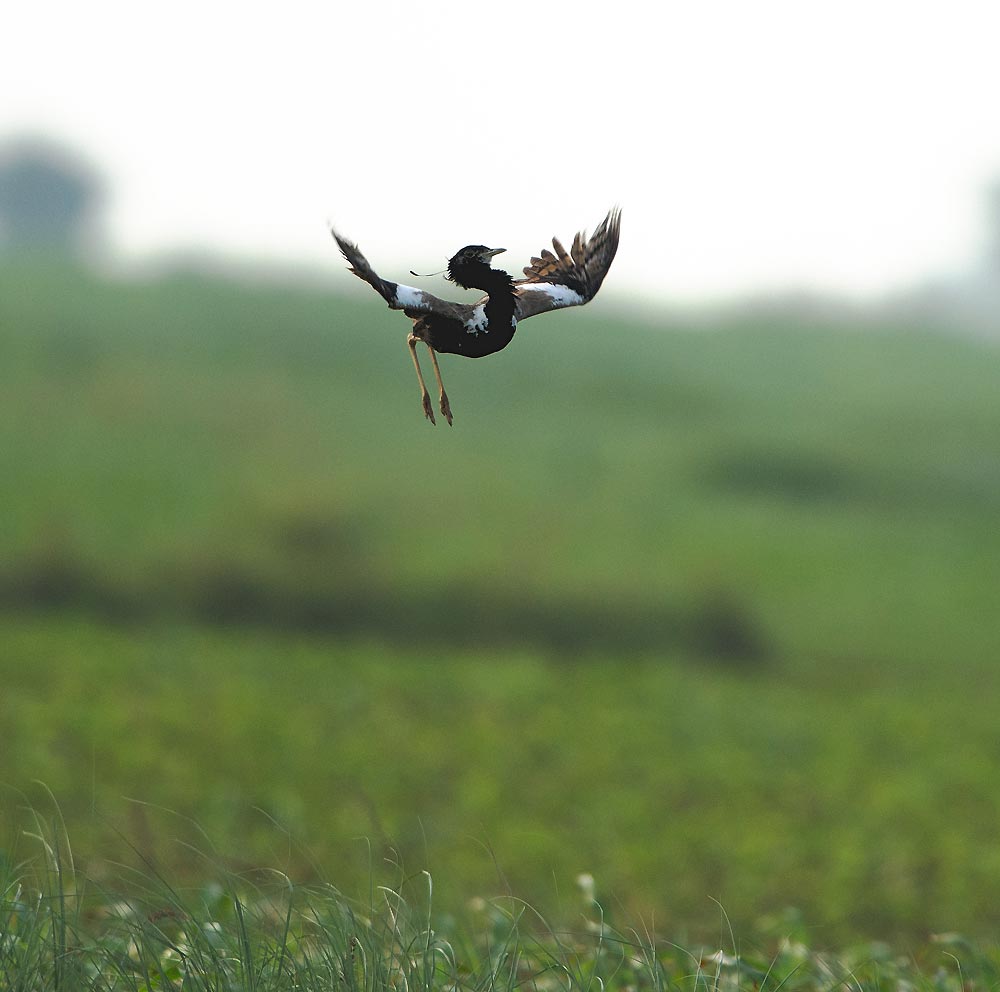 Displaying male Lesser Floricans perform a 'fluttering jump' high into the air above the long grass or crop fields of their territories (Koshyk / commons.wikimedia.org).

Saving Lesser Florican is compounded by many problems. As well as habitat loss and degradation, which has driven declining populations to become fragmented and isolated, further issues may be posed by feral dogs, power lines, human disturbance and other, unknown factors. While conservation measures put into place in its breeding areas are all well and good, this dispersive species performs significant movements across India during the non-breeding season. Many of these migrations are poorly understood and the whereabouts of most birds outside the breeding season is still unknown. This means that floricans spend up to three-quarters of the year in non-priority areas and habitat, putting them at greater risk for a large part of their lives.

The future of Lesser Florican remains very much on a knife edge, although it does seem that the bleak outcome of extinction looms large if sufficient effort is not invested over the next few years to prevent it being lost forever.

The full article can be read in BirdingASIA. Joining the Oriental Bird Club not only supports bird conservation across the Oriental region, but ensures members will receive BirdingASIA twice a year, plus one issue of the journal Forktail.