The last remaining Siberian Crane from the western population has arrived back in northern Iran for another winter.

The male crane, which is fondly known as Omid – Persian for 'Hope' – pitched down at the traditional wintering haunt of Fereydoon Kenar on 21 November, weeks later than his usual return at the end of October. He is the final remaining member of the western population of Siberian Cranes and spends his summers alone too, 5,000 km to the north along the Kunovat and Alymka Basins in Siberia.

Siberian Crane is now recognised as Critically Endangered worldwide. An eastern population of around 2,000 individuals still persists, breeding in north-eastern Siberia and wintering at Poyang Lake in the Lower Yangtze River Basin in China, but is severely threatened by development of the Three Gorges Dam (and other dams) along the Yangtze River.

However, the picture is even more bleak for the western population, which has been in decline for decades due to numerous factors at play, not least habitat loss and illegal hunting. Small numbers wintered in India until 2002, when they failed to return for the first time. As a result, by 2002, the remaining population of the world's western Siberian Cranes all wintered at Fereydoon Kenar, Iran. Despite the best efforts of conservationists, numbers continued to drop in the 2000s and, on 9 February 2009, the last remaining female died during a storm, leaving the ageing Omid as the sole survivor. 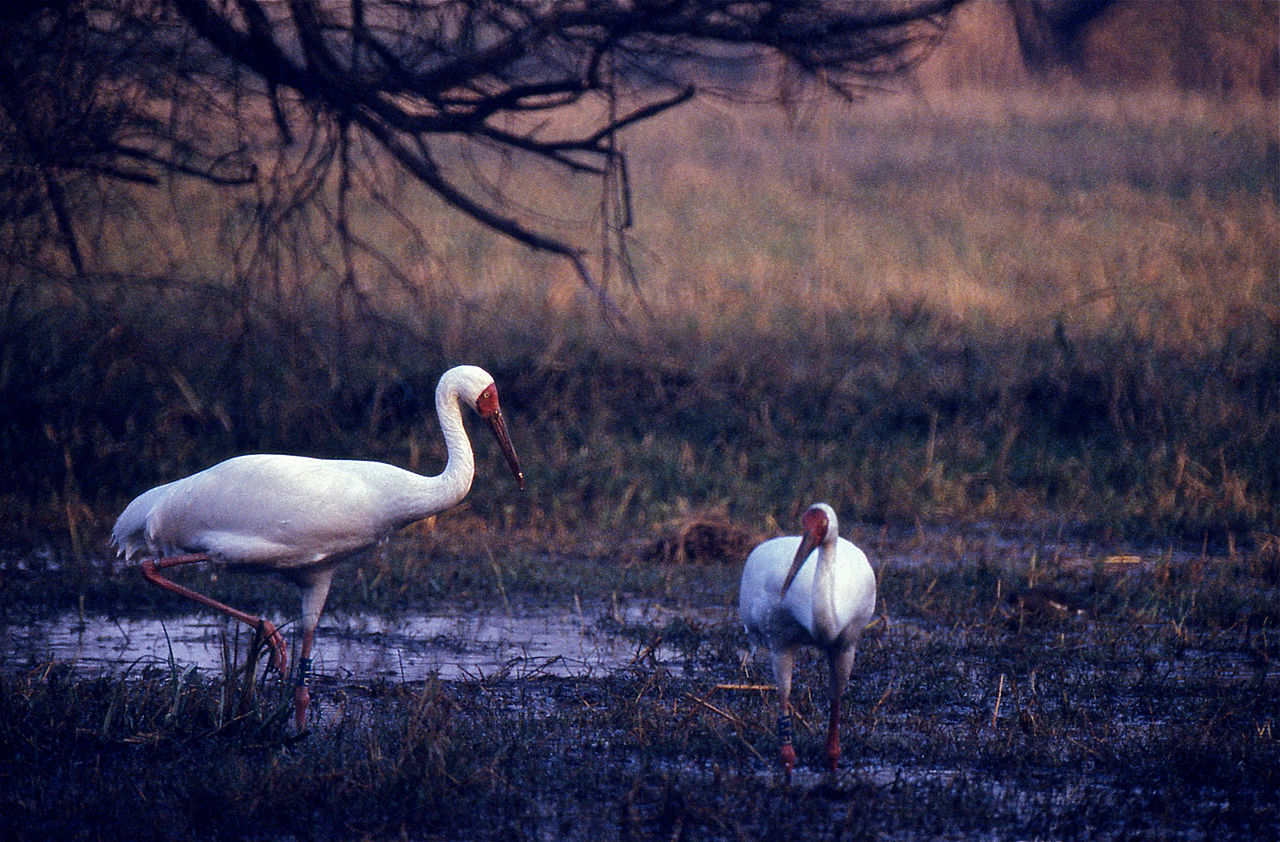 A sizeable population of Siberian Cranes used to winter near Bharatpur, India, but these went extinct in 2002. This photo was taken there in 1994 (Bernard Dupont/commons.wikimedia.org).

A captive-breeding programme based at Oka Nature Reserve, western Russia, released birds in Siberia for some time from the 1990s onwards, and in the early 2010s there was an apparent concerted push by Russia to further the scheme as the released cranes weren't migrating south for the winter. Seemingly large-scale investment in the 'Flight of Hope' project was headed up by none other than Vladimir Putin, who was even photographed flying an ultralight leading young cranes.

However, in 2013 funding was abruptly withdrawn, and the ultralights haven't been flown since. One of the key sponsors for Flight of Hope was the Crane Fund, which was directed by Aleksandr Yermakov, a member of the regional legislative assembly in the Yamalo-Nenets Autonomous Region and a member of United Russia, the pro-Putin party that dominates Russia's political landscape. Yermakov's interest in the fund appears to have ended in 2013 when he left for Moscow, taking up his newly elected seat in the Federation Council.

As a result, the story of the western population of Siberian Cranes seems set for a miserable conclusion. Out in the vast Siberian wilderness there may be an undocumented population of released birds but, as things stand, Omid cuts a lonely figure on the Iranian wetlands that were once home to dozens of his kind. His recent return was warmly received by locals, who came up with his nickname, but sadly the days of this annual reunion are numbered.