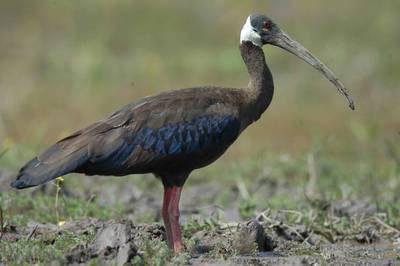 Record numbers of the Critically Endangered White-shouldered Ibis have been recorded at two sites in Cambodia, giving conservationists further hope for the survival of the species and renewed calls for further protection of its key habitats.

"This is great news for the White-shouldered Ibis" said Prich Phirun, WPO/BirdLife Project Officer, "Because the two sites are so far apart, we think there is almost no chance of double-counting."

The White-shouldered Ibis is a large ibis which inhabits trapeangs and slow-flowing watercourses in open lowland dry dipterocarp forest, often subject to seasonal flooding. The reasons for population declines are not well understood.

"On the available evidence, western Siem Pang District is the single most important site in the world for the White-shouldered Ibis. BirdLife believes that the establishment of a Protected Forest would be the best first course of action for the conservation of this species." said Jonathan Eames, Programme Manager for BirdLife International in Indochina.