Two Osprey chicks hatched in the Lake District have recently been fitted with satellite transmitters to discover where they go when they leave their birthplace. It is expected that once fledged, the birds, now six weeks old, will stay in the vicinity of Bassenthwaite Lake, near Keswick, until early September before striking out on their own.

The chicks are the first Ospreys in England to be fitted with satellite transmitters in almost a decade: the last were in Rutland, monitored between 1999 and 2001. 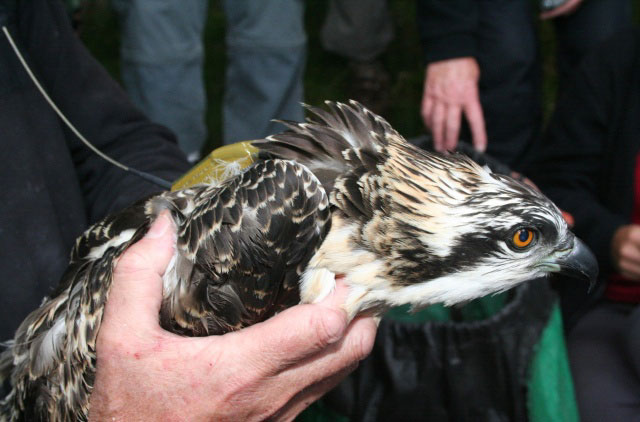 One of the satellite-tagged youngsters. (Photo: RSPB)

The GPS-enabled transmitters are accurate to a distance of 18m, programmed to take a location at hourly intervals. They also record the speed, altitude and course of any flights made. The solar-powered transmitters are attached to the chicks by a harness, like a tiny rucksack, and should last for three years.

Pete Davies of the Lake District Osprey Project said: "We think that the birds will go to Africa but we can't be sure. It will be fantastic to find out exactly where they end up, how long it takes them to get there and which route they take. We will also be able to see where they go when they head back northwards in March."

These chicks are the 10th successive brood to be reared at Bassenthwaite, with a total of 21 chicks fledging, the first for at least 150 years. Making their home in artificial treetop nests, these iconic birds of prey have been enjoyed by thousands of visitors over the past decade, who have marvelled at the sight of them soaring over Bassenthwaite or diving into the lake to catch fish.

The Lake District Osprey Viewpoint, at the Forestry Commission's Dodd Wood, gives open-air viewing of the birds and will be manned until Tuesday 31st August. It is located three miles north of Keswick, off the A591 — follow signs to Mirehouse.