Knot classified as threatened under US Endangered Species Act

On Tuesday the US Fish and Wildlife Service announced federal protection for the rufa subspecies of Red Knot, designating it as threatened under the US Endangered Species Act — meaning that it is at risk of becoming endangered throughout all, or at least a significant portion, of its current range.

Since the 1980s, Nearctic-breeding populations of Red Knot have fallen by as much as 75 per cent in some key areas. The largest concentrations in the US are found in Delaware Bay in May, when the species stops off to gorge themselves on the eggs of spawning horseshoe crabs. It is the decline in availability of this food source that is primarily responsible for the Knot's decline. Though this particular threat is now being directly address by state and federal management actions, other threats, including sea-level rise, shoreline projects and coastal development, continue to shrink habitats in its wintering and migratory quarters alike.

Service Director Dan Ashe explained: "The Red Knot is a remarkable and resilient bird known to migrate thousands of miles a year from the Canadian Arctic to the southern tip of South America. Unfortunately, this hearty shorebird is no match for the widespread effects of emerging challenges like climate change and coastal development, coupled with the historic impacts of horseshoe crab over-harvesting, which have sharply reduced its population in recent decades." 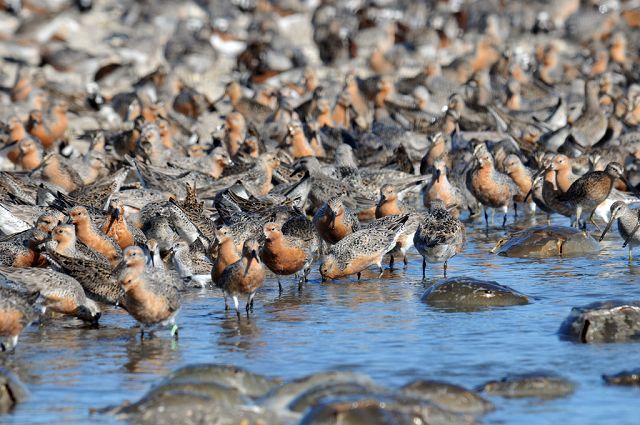 Changing climatic conditions are also altering the bird's breeding habitat in the Arctic as well as affecting food supplies across its entire range — in particular through climate-driven mismatches in migration timing that affect the peak periods of food availability. The bird must arrive at Delaware Bay at exactly the time when horseshoe crabs are laying their eggs.

Mr Ashe added: "Although historic threats in the Delaware Bay area have been ameliorated thanks to the actions of federal and state partners, our changing climate is posing new and complex challenges to Knot's habitat and food supply. It has never been more critical that we take positive action to save this bird."

One of the longest-distance migrants in the animal kingdom, some rufa Knots fly more than 18,000 miles each year between breeding grounds in the Canadian Arctic and wintering grounds along the Gulf Coast, south-east United States and South America. One bird, banded by biologists in 1995 in Argentina, has been nicknamed 'Moonbird' because he has flown the equivalent of a trip to the moon and at least halfway back in his lifetime.

International, state and local governments, the conservation community, beach-goers and land managers are helping ensure Knots have safe areas to winter, rest and feed during their long migrations. These partners help the birds in a variety of ways, including managing the harvest of horseshoe crabs (which are caught for use as bait in conch and eel pots), managing disturbance in key habitats, improving management of hunting outside the United States, and collecting data to better understand the species.

More information can be found at www.fws.gov/northeast/redknot.