The migratory Monarch butterfly Danaus plexippus plexippus, known for its spectacular annual journey of up to 4,000 km across the Americas, has entered the IUCN Red List of Threatened Species as Endangered.

Famous for its movements from Mexico and California in the winter to summer breeding grounds throughout the United States and Canada, its population has shrunk by between 22% and 72% over the past decade.

Legal and illegal logging and deforestation to make space for agriculture and urban development has already destroyed substantial areas of the butterflies' winter shelter in Mexico and California, while pesticides and herbicides used in intensive agriculture across the range kill butterflies and milkweed, the host plant that the larvae feed on. 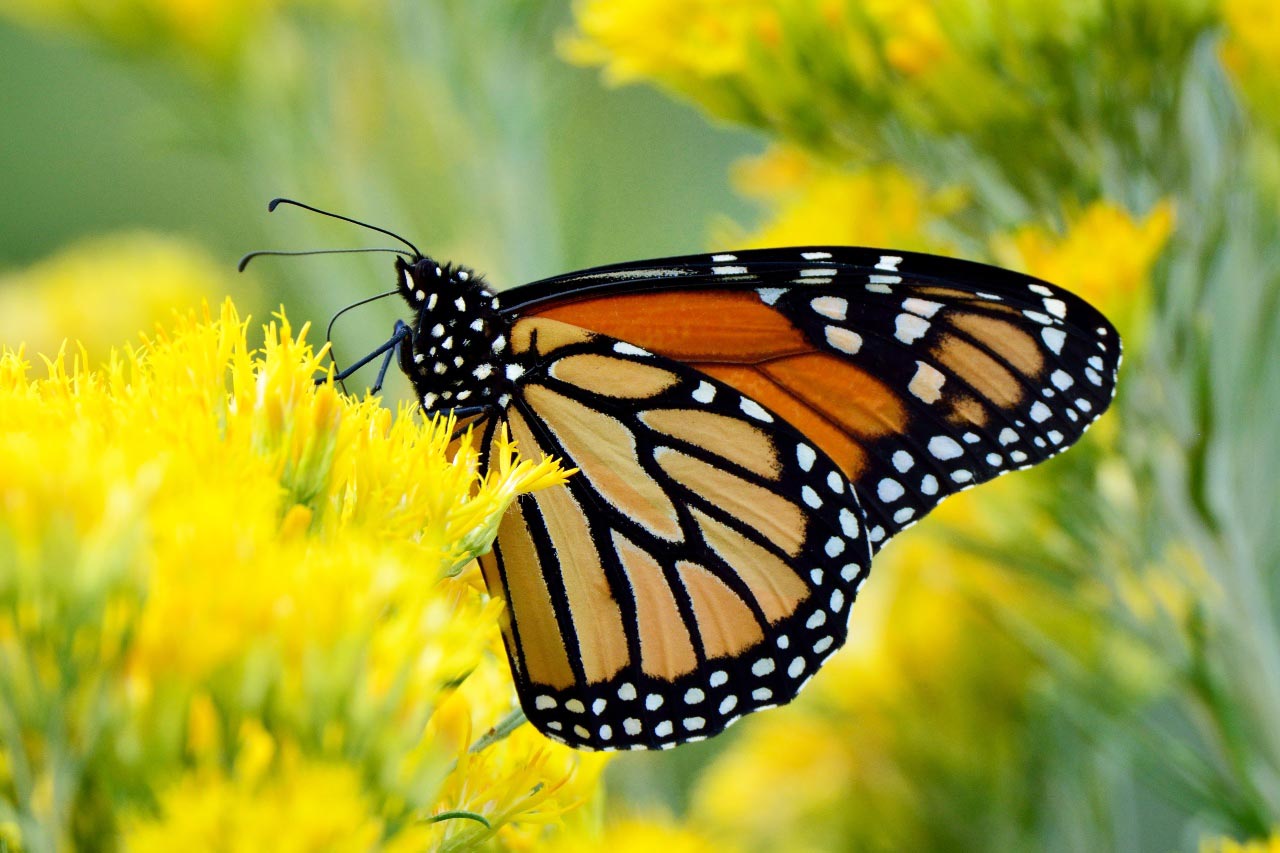 Climate change has significantly impacted migratory Monarchs and is a fast-growing threat; drought limits the growth of milkweed and increases the frequency of catastrophic wildfires, temperature extremes trigger earlier migrations before milkweed is available, while severe weather has killed millions of butterflies.

The western population is at greatest risk of extinction, having declined by an estimated 99.9%, from as many as 10 million to 1,914 butterflies between the 1980s and 2021. The larger eastern population also shrunk by 84% from 1996-2014. Concern remains as to whether enough butterflies survive to maintain the populations and prevent extinction.

"It is difficult to watch Monarch butterflies and their extraordinary migration teeter on the edge of collapse, but there are signs of hope. So many people and organisations have come together to try and protect this butterfly and its habitats. From planting native milkweed and reducing pesticide use to supporting the protection of overwintering sites and contributing to community science, we all have a role to play in making sure this iconic insect makes a full recovery," said Anna Walker, member of the IUCN SSC Butterfly and Moth Specialist Group and Species Survival Officer at the New Mexico BioPark Society, who led the Monarch butterfly assessment.

In addition, all 26 surviving sturgeon species are now at risk of extinction due to dams and poaching, pushing the world's most Critically Endangered group of animals yet closer to the brink.

The assessments are based on refined calculations which show their decline over the past three generations to be steeper than previously thought. Yangtze Sturgeon Acipenser dabryanus has moved from Critically Endangered to Extinct in the Wild, 17 species are now Critically Endangered, three are Endangered and five are Vulnerable. The reassessment has also confirmed the extinction of the Chinese Paddlefish Psephurus gladius.

Renowned for their size, with the Critically Endangered Beluga Sturgeon Huso huso growing up to 8 m long and weighing 1,700 kg, sturgeons have been overfished for their meat and caviar for centuries. Despite being protected under international law, poaching continues to affect more than half of these species; stronger enforcement of regulations on the illegal sale of sturgeon meat and caviar is critical to stop further declines. 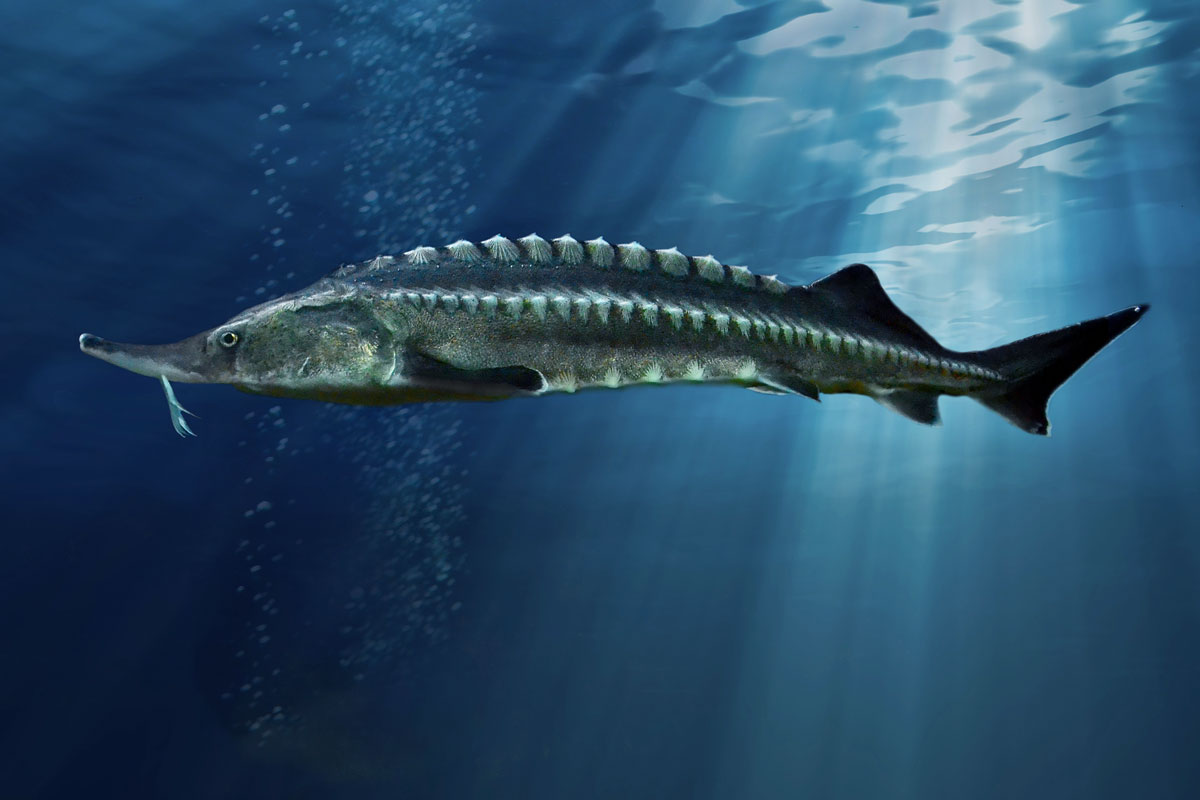 The spectacular Beluga Sturgeon can weigh up to 1,700 kg, but like many others in its family, it is Critically Endangered (Maksym Yakovliev / commons.wikimedia.org).

Dams affect all sturgeon species migrating to their breeding grounds, while rivers warming due to climate change further disrupts sturgeon reproduction. Freshwater ecosystem restoration and building effective fish passages, together with restocking, which has already proven effective for species such as the Critically Endangered Adriatic Sturgeon Acipenser naccarii, are key measures to support the long-term survival of the world's sturgeons.

Furthermore, Tiger has been reassessed, with new figures revealing that there are currently between 3,726 and 5,578 individuals in the wild worldwide. The 40% increase since the last Tiger assessment in 2015 is the result of improvements in monitoring, showing that there are more tigers than previously thought, and the number of tigers globally appears to be stable or increasing. While this reassessment confirms that the Tiger remains Endangered on the IUCN Red List, the population trend indicates that projects such as the IUCN Integrated Tiger Habitat Conservation Programme are succeeding and recovery is possible as long as conservation efforts continue.