It doesn't take brains to pick a World Cup winner

The Cape Griffon Vulture — one of Africa's largest birds of prey — is believed to be under threat from the followers of muti magic in South Africa, who mistakenly believe smoking dried vulture brains will confer supernatural powers upon gamblers enabling them to predict match results from the forthcoming football World Cup. Betting on the outcome of World Cup games will be big business and conservationists believe superstition and sorcery will be powerful attractions for gamblers desperate to increase their chances of a big win, placing even more pressure on the Cape Vulture, which is already classified as facing global extinction. 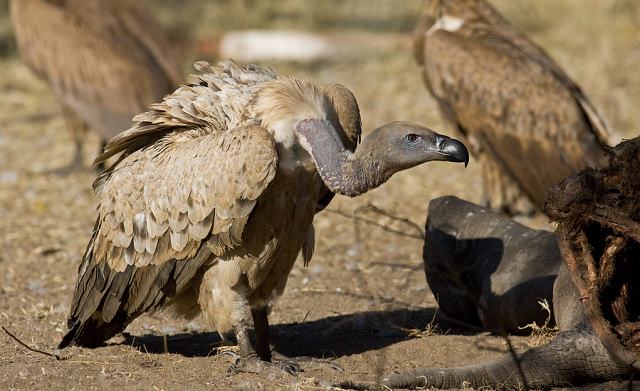 Mark Anderson is the Executive Director of BirdLife South Africa. He said: "Many vultures species across the world are in trouble. Our very own species in southern Africa is declining sharply for a number of reasons, including reduced food availability, deliberate poisoning and electrocution from electricity pylons. The harvesting of the birds' heads by followers of muti magic is an additional threat these birds can't endure."

The RSPB's Dr Chris Magin works with BirdLife South Africa. He said: "One in every six of the world's birds of prey are facing extinction and during the past two decades vultures have virtually vanished from West Africa, South Asia and other parts of the world."

Steve McKean, from KwaZulu–Natal Wildlife, has been studying the decline of vultures related to the harvesting of birds for muti magic. He said: "Our research suggests that killing of vultures for so-called 'traditional' use could render the Cape Griffon Vulture extinct in some parts of South Africa within half a century. In the worst case, the Cape Griffon Vulture could be suffering population collapse within 12 years."

Conservationists remain concerned that most vultures killed for muti magic are killed using the poison Aldicarb, which is also lethal to humans.

André Botha, manager of the Birds of Prey Working Group at the Endangered Wildlife Trust in South Africa, said: "Vultures fulfil an important ecological role as scavengers and their absence in Africa indicates an unhealthy environment. This threat is also known to occur widely in East and West Africa and poses a threat to all species of vulture on the African continent."

"Vultures are currently considered among the most threatened bird groups in Africa, with four out of eleven species Globally Threatened according to BirdLife International on behalf of the IUCN Red List", said Dr Julius Arinaitwe, Head of BirdLife's Africa Secretariat. "It is our duty to save them", he concluded.

South Africa is one of the most biodiverse countries in Africa with 841 species of birds recorded. However around 39 of these are considered threatened with global extinction and the country faces severe environmental threats including pressure as a result of rural poverty, built development and mining and climate change.