The Roy Dennis Foundation has revealed that the young White-tailed Eagles released on the Isle of Wight this summer have made their first exploratory flights in recent weeks.

Two of the 'class of 2020', individuals known as G463 and G471, have been touring south-west England since mid-October, with both having flown as far south-west as the Land's End area of Cornwall, before doubling back to the east.

G471 was the first of these to move, leaving the Isle of Wight on 11 October and moving west to Weymouth, Dorset. It remained in Devon for some time after this, making a visit to the north coast on 16th and undertaking an 18-km sea crossing to the famous island of Lundy, which it completed in around 30 minutes late morning. It spent a while resting on the island before heading back to the mainland in the afternoon, where it relocated to the Tamar Estuary. Here it stayed for around a fortnight, before moving south-west into Cornwall on 4 November. At present, G471 remains in Cornwall.

G463 followed shortly after, leaving the Isle of Wight on 13 October and ending up in west Cornwall two days later. It remained in the county for several days, before gradually moving east to Devon, where it has lingered since. 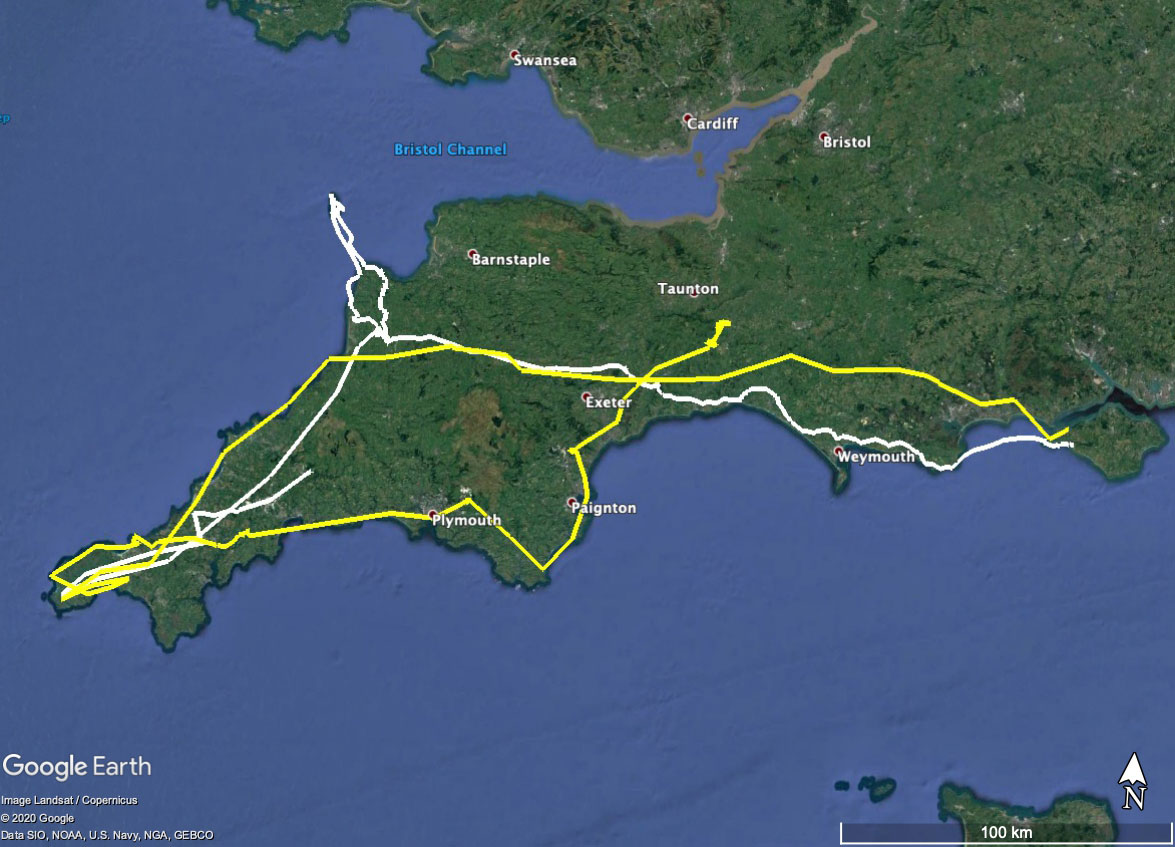 Map showing the routes of G471 (white) and G463 (yellow) since they left the Isle of Wight in mid-October (Roy Dennis Foundation).

Meanwhile, some of the initial release birds from 2019 remain at large elsewhere in England. Having spent much of the spring and early summer on the North York Moors, G393 arrived in west Norfolk on 1 August and has remained there since, ranging between a number of different sites, both inland and on the coast, but generally favouring the Snettisham area.

After a summer on the North York Moors, G318 gradually moved south, arriving in Lincolnshire on 26 September, where it has lingered ever since. While mobile, it has spent time in both the Wolds and the Fens. Meanwhile, both G324 and G274 are back on the Isle of Wight, where they have been making the most of the rich fishing opportunities off the island's coast since returning in September, often being seen alongside some of this year's released eagles.

For more details on the release and updates on the whereabouts of the eagles, please visit www.roydennis.org.