Against a backdrop of daily news reports from Iraq it is refreshing to see that an environmental training programme for Iraqi biologists from Nature Iraq is leading to new discoveries in the country, and has ultimately led to the release of a guide to Iraq's birds—the first field guide of its kind for the nation, and one jointly published by Nature Iraq and Birdlife International (click here for more).

"The book covers the 387 bird species that have been recorded in Iraq. This is the first comprehensive, fully illustrated field guide to an Arabic-speaking country, and there are plans to publish a children's bird book later this year," said Richard Porter, Middle East advisor with Birdlife International.

"For Iraq—a nation that has lost so much of its wildlife in the last twenty years—this book opens the door for the growing conservation movement in this country," said Dr Ali Douabul of Nature Iraq. "Local-language field guides are crucial tools for conservation. They encourage people to realise, appreciate and get involved in bird conservation, which, because birds are good indicators of the environment, has potential benefits for all of our wildlife."

The release of the Birds of Iraq field guide adds weight to the conservation movement that has started to emerge in the country. Since the fall of Saddam Hussein's government in 2003, the Mesopotamian Marshes—thought to be the site of the biblical Garden of Eden and home to 28 of Iraq's Important Bird Areas—have been the focus of a major international programme to help restore their ecological and social–cultural heritage.

Under the regime of the previous government, almost 90% of the marshes were destroyed through drainage. However, BirdLife, together with the University of Waterloo (Ontario) and Environment Canada under the umbrella of the Canada–Iraq Marshlands Initiative (CIMI) and funded by the Canadian Development Agency (CIDA), has been offering the training for Iraqi biologists to undertake the first comprehensive survey of bird populations in Iraq. The training, undertaken in Syria and Jordan, has resulted in five surveys of the marshes, three in winter and two in summer. The project will continue for two more years and the results so far have been significant.

"The survey by Iraqi Biologists from Nature Iraq found that birds like the Basra Reed Warbler—which was thought to be globally endangered—occurred more widely than expected, such that it looks to be downgraded to a less critical category. They have been found in good numbers and the Iraqi biologists are undertaking ecological studies of the species," said Richard Porter.

Re-flooding in the last three years has led to the marshes being restored to 40% of their former size.

"This has led to a return of quality for the reedbeds. Birds like the Basra Reed Warbler, Grey Hypocolius and Iraq Babbler have been found in good numbers by Iraqi biologists from Nature Iraq. Species such as African Darter and Sacred Ibis have also been found in numbers at the only site they are known to breed in the Middle East. The surveys have also revealed numbers of Marbled Duck and good numbers of wintering wildfowl." said Richard Porter. 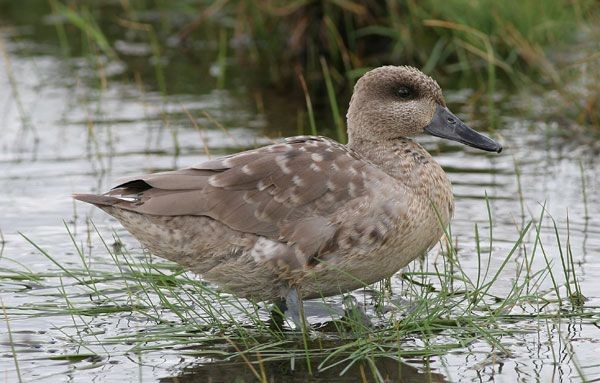 Marbled Duck: Birds like the Marbled Duck are globally threatened but were found during the survey work (photo: Gary Thoburn).

No doubt the publication of the field guide will help encourage others to participate and it is hoped that further surveys will take place elsewhere in the country in due course.

So, the future looks much better for the marshes of southern Iraq than was once feared. Richard Porter commented: "It is both humbling, and uplifting, to see the Iraqi biologists impart so much enthusiasm and energy for the survey in spite of the problems that surround them in their own country."

The book, in Arabic, costs £15. It can be purchased from OSME sales. All profits go to Nature Iraq.