The Indian Ocean Tuna Commission (IOTC) today agreed to measures that, if appropriately implemented by tuna longline fishing vessels, will result in significant reductions in albatross mortality. The Indian Ocean is home to globally important populations of eight albatross species, including the Critically Endangered Amsterdam Albatross. Each year hundreds of thousands of seabirds are killed unintentionally during the course of longline fishing. This is the primary reason behind the fact that 17 of the world's 22 species of albatrosses are threatened with extinction. Tuna longliners usually deploy several thousand hooks, attached by branchlines to a main line that can be longer than 100 km. Seabirds, especially albatrosses, are vulnerable to becoming hooked when they take the bait, and are drowned as the line sinks to setting depth (known as 'bycatch'). Although the scale and nature of this threat has been understood for a long time, the development of measures to reduce bycatch has been slow. BirdLife International and researchers in Australia, the USA and UK have been particularly active in devising and testing technologies and fishing practices to reduce bycatch. 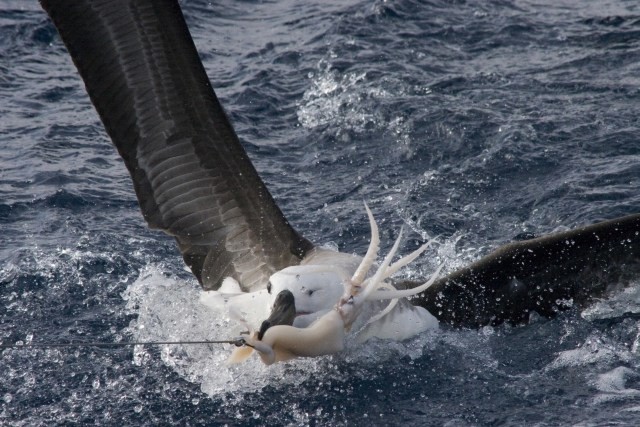 In November last year, the tuna commission for the Atlantic (ICCAT) agreed to a strong set of measures (that are based on scientific evidence) that fishing vessels must deploy when working in areas where albatrosses occur. BirdLife has worked hard since then to pave the way for the IOTC to harmonise its seabird conservation measure with that of ICCAT. From now on, all longline vessels will be required to use two seabird bycatch mitigation measures from a choice of bird streamer (tori lines) that scare birds away from the hooks, adding weights to the hooks to make them sink out of the reach of seabirds more quickly, or setting hooks at night when most birds are less active. The fishermen's concerns centre around the addition of weights to lines: large sharks or fish can place such strain on lines when being hauled onboard that the line snaps. When this occurs, lead weights attached to the line can fly back towards the hauling station and pose a significant safety threat. BirdLife has developed a new type of lead sinker that slides off the line when it snaps, thereby eliminating the safety risk.

After long deliberations, stretching across five days of the Commission meeting, agreement was finally reached for the new measure. Dr Ross Wanless, Seabird Division manager at BirdLife South Africa, represented BirdLife International at the meeting. "The fact that none of the nations challenged the effectiveness of the measures proposed, and that none insisted that measures which do not have scientific support be included in the proposed measure, represents massive progress in itself. The willingness by all to find a way forward was encouraging," said Dr Wanless. The delegation from Japan offered US$20,000 to support training workshops for fishing skippers to ensure safe and appropriate use of line weighting measures. BirdLife International and the International Seafood Sustainability Foundation will work with Japan and other nations to secure additional funding and provide the training.