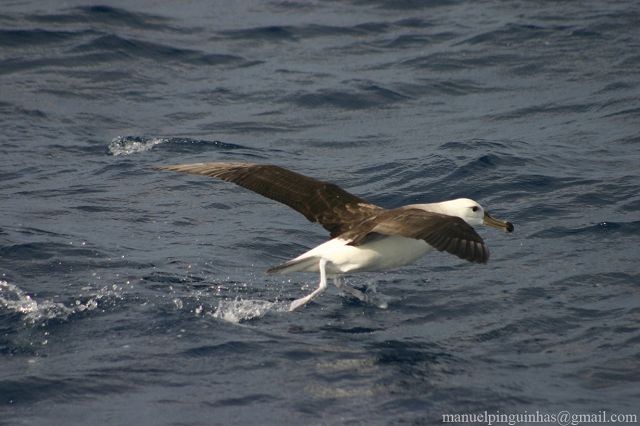 An estimated 100,000 albatrosses die annually in the longline fishing industry, but recent research has highlighted that large numbers of albatrosses are also dying in trawl fisheries. In one recent study, 12,000 albatrosses are estimated to have died in the South African trawl fishery in one year. As new threats for albatrosses emerge -heightening their risk of extinction- BirdLife International, in partnership with the RSPB (BirdLife in the UK) and working with collaborators across the world, are committing to raise &pound;2 million over the next five years, doubling the capacity of its Albatross Task Force programme.

Albatross Task Force members crucially advise fishing crews on the simple and cost-effective ways to avoid catching albatrosses that steal bait from the longline hooks. Measures such as weighting the lines so they sink more quickly, or attaching streamer (bird-scaring) lines to the stern of the vessels, have proved highly effective and have gained international recognition. In the trawl fisheries, research has shown that albatrosses, and other seabirds, can become entangled and drowned in fishing gear. A vital part of the Albatross Task Force's work is to encourage crews to use effective mitigation measures, such as the bird-scaring lines.

Dr Ben Sullivan, BirdLife's Global Seabird Programme Coordinator said: "The Albatross Task Force members are doing incredible things working with the fishing industry in the Southern Hemisphere - advising and supporting mitigation techniques, raising awareness and ultimately, reducing seabird casualties. But there are so many vessels and so many fisheries that we have yet to tackle, where seabirds are dying right this minute," he said. "By expanding the programme we will be able to double the number of task force instructors and reach several new countries."

The expansion of the Task Force should benefit a number of albatross hotspots, especially those along the Pacific and Atlantic coasts of South America. "To fully make the most of this expansion, continued support for the Save the Albatross campaign is vital," finished Sullivan.

Find out more about the Save the Albatross campaign