Around 200 Common Starlings died suddenly in Spain last month, sparking an investigation to find out what might have caused the incident.

The starlings plummeted down on locals in Ferrol, north-western Spain, on 26 November at around 9 am. Local media said the dead birds hit cars and people outside the Juan Cardona Hospital, although police confirmed there were no injuries. 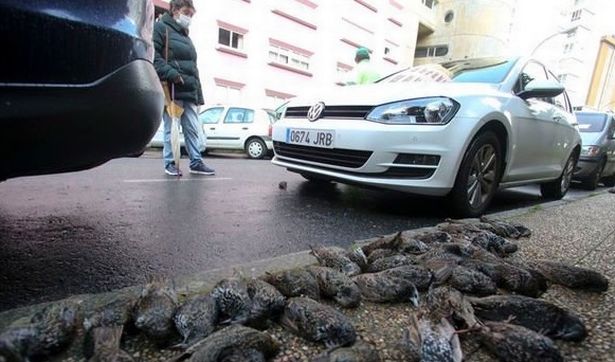 Some of the dead starlings in Ferrol (Twitter / RadioVoz Ferroz).

Mapi Rodríguez, president of the local resident association, said: "They came out of the trees in the emergency area of the hospital, flew a few metres and plummeted to the pavement. The birds have been collected and we are now waiting to find out what happened."

Of the hundreds of birds which fell, two have been taken by a regional environment agency for analysis, with Ferrol City Council also joining in on the investigation.