Inside the July 2022 issue of Birdwatch magazine 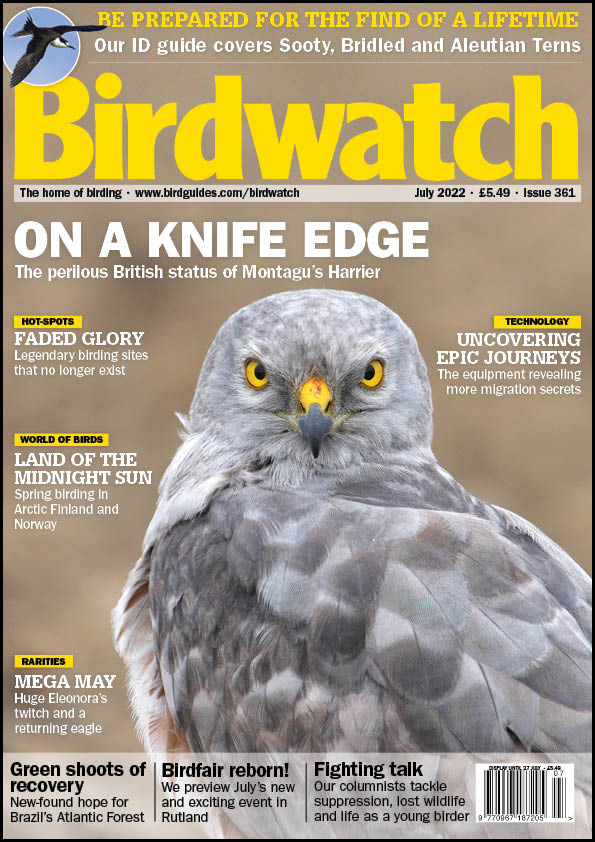 You can now read the July 2022 issue of Birdwatch as either a digital download or the paper magazine. The paper magazine is available in the shops from Thursday [23 June] – or you can order online.

This month's cover depicts the UK's rarest breeding raptor, Montagu’s Harrier. RSPB's Mark Thomas takes a closer look at why it's in trouble and if anything can be done to save the species.

Also in the June issue, we take a look into the rarity archives and many site names will stand out – not least for their absence from today's birding headlines. Rich Bonser reminisces about these 'lost' locations of the past, looking at what happened to some of the most prolific birding sites of yesteryear.

In this month's ID guide, Andy Stoddart takes a look at three vagrant tern species that would make any birder's summer: Sooty, Bridled and Aleutian Terns are all covered in detail.

Summer birding in the UK can be sleepy at times, but the Arctic is a hive of activity with the breeding season at its peak – Ed Stubbs reports on his May trip.

Recent years have seen huge advances in the technologies used to monitor the movements of birds. The Motus Wildlife Tracking System is the latest addition to the tool kit and Dr Lucy Mitchell explains the method behind it and some of the results received so far.

July's digital edition has lots of bonus content, including:

•    Video of vagrant terns;
•    Film of breeding Montagu’s Harrier;
•    Footage of migrant Green Sandpipers;
•    Sound recordings of the songs and calls of House Martin and Swallow;
•    Film of rarities and scarcities from Britain, Ireland and the wider Western Palearctic.