A recent Facebook post by the Lebanese Hunting Club, dated 10 January but subsequently erased, used horrifying images to advertise hunting trips in Tunisia. However, while they shocked the internet, the carnage they depict is currently legal in the country.

Widely shared by conservation organisations and activists, the graphic invitation for tourists to slaughter excessive numbers of birds in Tunisia provoked wholesale indignation and disgust, who are calling on the country's authorities to eradicate these barbaric but apparently lawful practices.

Tourist hunters in Tunisia are permitted to kill Wild Boar, Golden Jackals, Foxes, mongooses and Genets as well as numerous bird species. To do so, they need only apply to a Tunisian travel agency to organise a hunting trip. They are then provided with a hunting licence (valid for seven days and renewable) and a specialised guide. Depending on the game they target, hunters may also pay a fee to the Tunisian state, which can range from 1,000-2,000 dinars (€ 336-672) per hunter, depending on the time and duration of the trip. Each hunter is also allowed to bring 350 rounds of ammunition.

No quota is set for the killing of thrushes or Common Starlings. In fact, this is the case for more than 30 bird species in Tunisia which are considered legally huntable. The exceptions to this rule are Barbary Partridge and sandgrouse species – for these, each hunter is limited to six and 10 kills per day respectively.

During the three consecutive days that a tourist is authorized to hunt, they can visit up to three governorates (territorial communities in Tunisia), choosing from 12 in which hunting birds is permitted. They can expend up to 350 cartridges of ammunition, which makes it very easy to understand how the mass slaughter pictured below can happen. 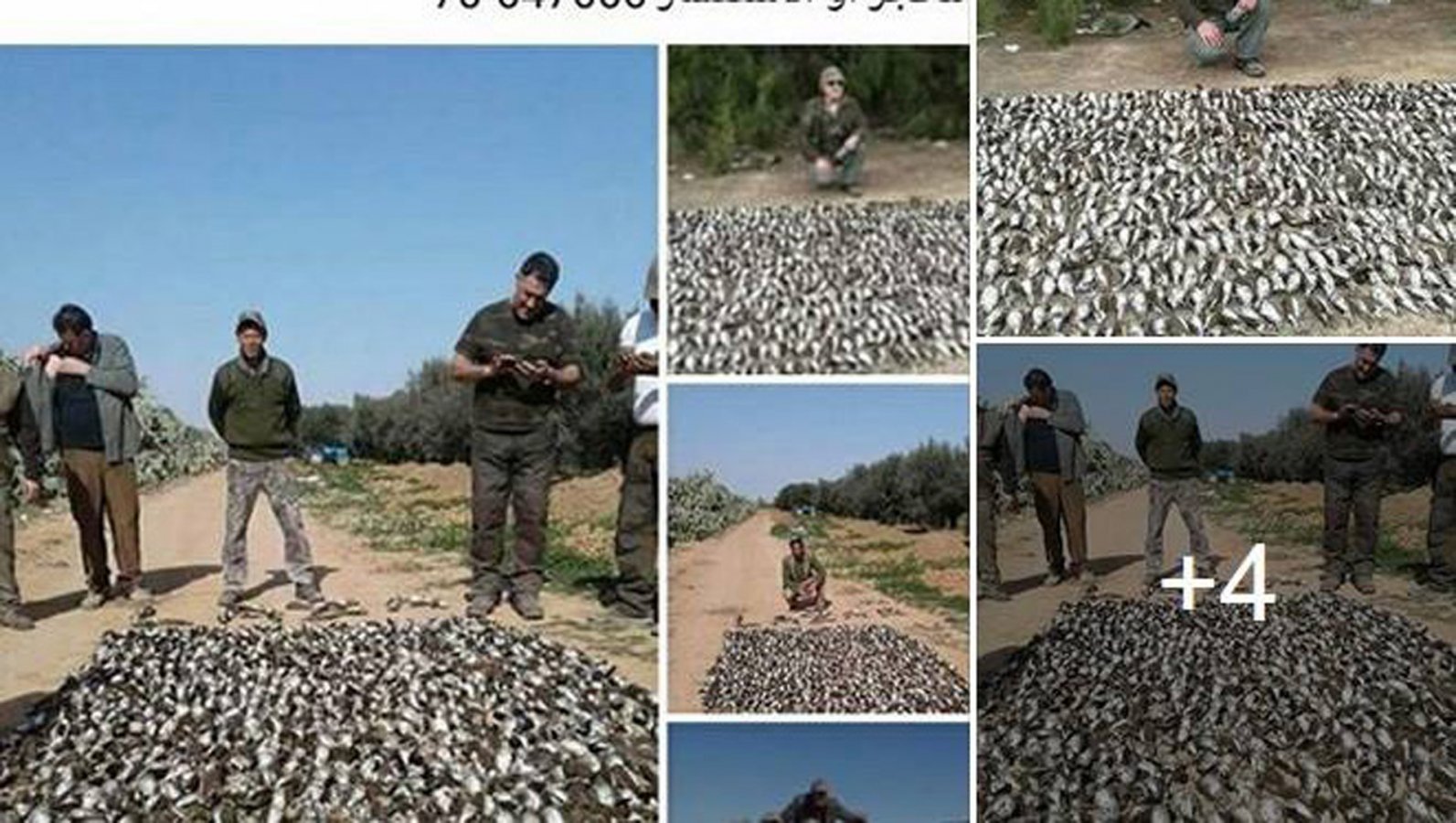 A screenshot depicting the appalling scale of legal slaughter currently occurring in Tunisia – such levels of hunting are unsustainable adn indefensible in a modern world where declining birds already face many other pressures (BirdLife International).

Les Amis des Oiseaux (AAO; BirdLife in Tunisia) has not let the situation go unchallenged. As a permanent member of the Consultative Commission on Game Hunting and Conservation (CCCCG), the body in charge of the annual review of the hunting organisation decree, it has been campaigning since its appointment for better provisions of this decree.

Through its awareness-raising and advocacy efforts, it has succeeded in reducing the number of bird species that can be hunted in Tunisia and increasing the number of specially protected species. Thanks to the association's tireless lobbying, certain hunting methods and techniques have been banned and hunting opening periods reduced. Each year, AAO ensures that the most important sites for the conservation of birdlife in Tunisia remain closed to hunting.

These encouraging achievements are in part thanks to AAO's close collaboration with smaller, regional projects across the country, who work together to make hunting more sustainable. However, many battles still need to be won. These include the introduction of quotas for all of Tunisia's huntable bird species, modifying sandgrouse hunting periods, reducing the period during which female hawks may be kept and automatically removing from any species of bird that has been declared globally threatened with extinction from the hunting list.

All of these measures are extremely unpopular among most hunters and authorities, for several reasons, none of which are ecological. As biodiversity conservation associations are largely in the minority within the commission, AAO has not yet succeeded in finding a majority to push these improvements through. Together with its national and international partners, AAO is considering a new strategy to ensure that the members of the CCCCG Commission hear the voice of reason.