In an appalling move, smugglers dumped 300 illegally trapped birds into the sea off Peninsular Malaysia while attempting to escape the authorities on Tuesday [16 January].

Malaysia's Maritime Enforcement Agency (MMEA) officers intercepted the boat and three Indonesian men were apprehended. However, authorities were not able to save the vast majority of the birds, which were believed to have been collected in various South-East Asian countries for sale in Indonesian markets – almost all drowned, with just three surviving.

MMEA said it believed the birds were smuggled overland from Vietnam to Thailand and then into Malaysia, which served as a transit point before the birds were to be smuggled into Indonesia for sale. The case has been handed over to Peninsular Malaysia's Wildlife and National Parks Department for further investigations under the Wildlife Conservation Act 2010. Authorities are working to identify all the birds, most of which are thought to be songbirds. 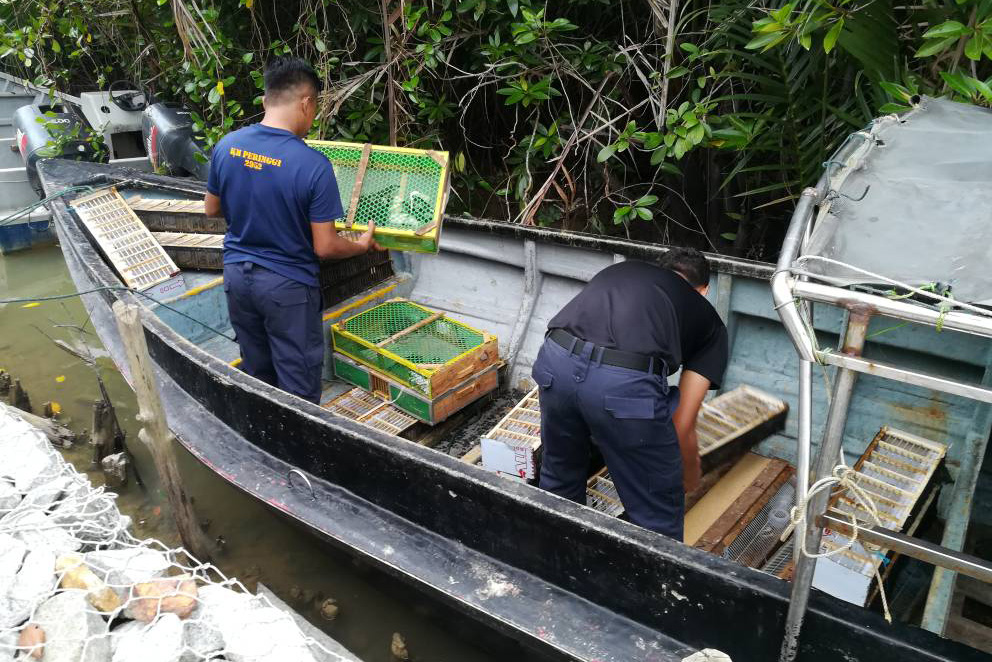 MMEA, which is tasked with maintaining law and order and co-ordinating search and rescue operations in Malaysian waters, has previously stopped bird smugglers moving their contraband to and from Indonesia. In April 2016, its officers found 100 Oriental Magpie-Robins on a boat which was also ferrying illegal immigrants from Indonesia. In 2015, it intercepted an Indonesian boat with 150 Oriental Magpie-Robins headed for Malaysia and in 2013 it stopped an Indonesian national attempting to smuggle 10 cockatoos into Malaysia.

While Tuesday's incident confirms the persistent illegal capture and smuggling of wild birds for trade in the region, it also raises questions about the source of birds observed in Indonesia's thriving caged bird trade.

"So popular is bird keeping as a hobby, traders are expanding their collection of commonly traded birds into other range states to supply Indonesia's flourishing bird markets. Collaboration between countries is crucial to end this problem, or across Asia we will be left with silent forests," said Kanitha Krishnasamy, Acting Regional Director for TRAFFIC in South-East Asia. 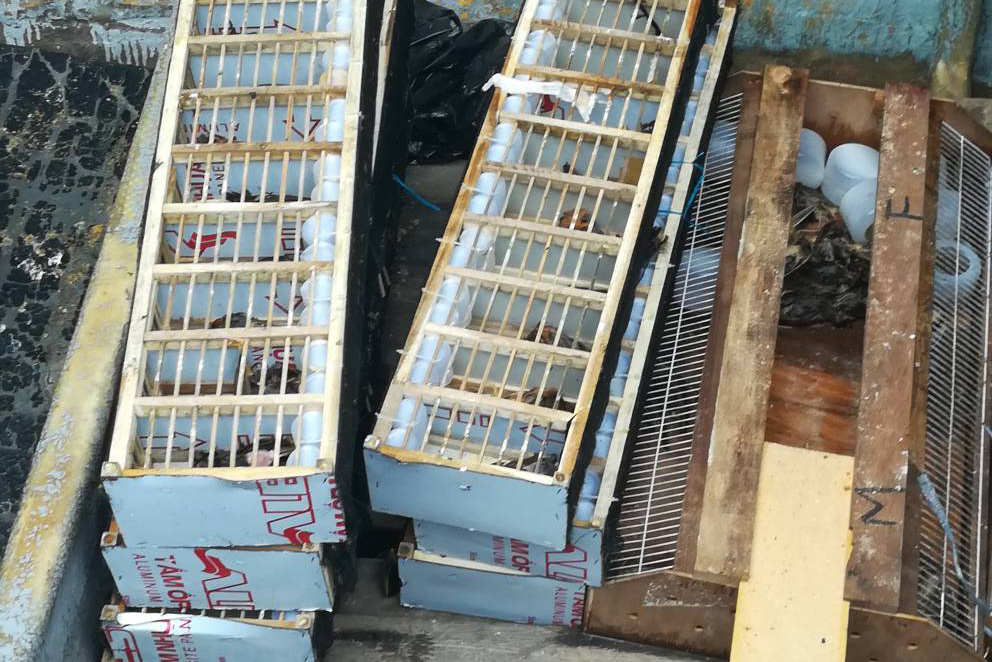 The birds were being smuggled in wooden cages, each individual compartment resembling a miniature prison cell (TRAFFIC).

In September 2017, the European Association of Zoos and Aquaria (EAZA), together with TRAFFIC, BirdLife International and the IUCN Asian Songbird Trade Specialist Group, launched Silent Forest, a collaborative effort to save iconic Asian songbird species from extinction by raising awareness about the devastating effects of the trade in songbirds across South-East Asia and to fund conservation projects working to address the problem.

So great is the demand for caged birds within Indonesia that authorities regularly stop huge shipments of wild-caught birds trafficked between the nation's many islands. Just days ago, authorities at Lembar Port in West Lombok stopped a truck stuffed with over 1,700 birds destined for Bali. Among them were a Brahminy Kite, a protected species, and over 1,000 Streaked Weavers. The birds were packed in plastic crates and cardboard boxes, and found on a lorry during a routine vehicle inspection, and many were dead or in poor condition when found.

It was the second such case for West Lombok law enforcement in 2018. The first was a seizure of more than 2,000 wild-caught birds on 8 January, that were being transported to Java and Bali without the necessary permits and documents. The West Nusa Tenggara Nature Conservation Agency, which was involved in both cases in January, also told Indonesian press that it foiled six more wildlife smuggling attempts in 2017, resulting in the seizure of about 8,000 birds.

Excessive trapping for the caged bird trade has been identified as one of the major threats facing songbirds in South-East Asia. Huge open markets, selling millions of birds each year, can be found throughout the region, but are particularly prominent in Indonesia, where bird-keeping is a widespread practice.

Previous TRAFFIC surveys have shown the phenomenal songbird trade in Indonesia's markets, with more than 19,000 bird present in three Jakarta markets over three days, and 22,911 in five markets in Central and East Java in three days. 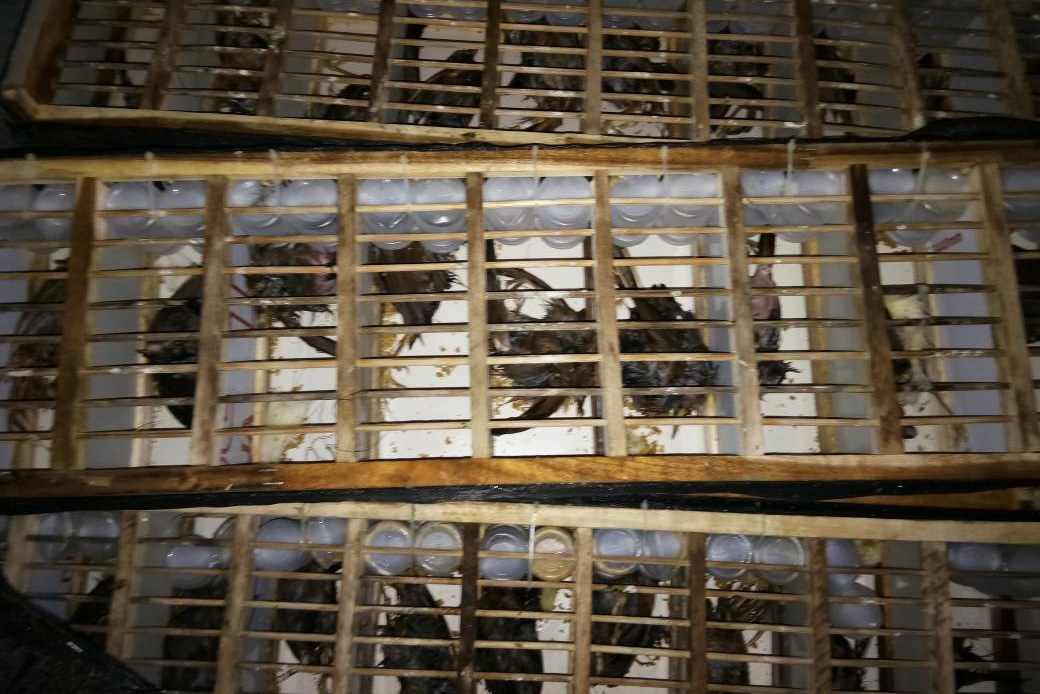 Although graphic, this image depicting several drowned birds highlights the misery they faced which ultimately resulted in their deaths. Illegal trade accounts for the untimely deaths of many thousands of illegally caught wild birds each year and remains worryingly prevalent across South-East Asia (TRAFFIC).