The first-ever red list of birds for the Isle of Man has been published following a major study of the island's avifauna.

Manx BirdLife has completed the work entitled Birds of Conservation Concern in the Isle of Man 2021 (BoCCIoM), which is the first comprehensive assessment of the conservation status of wild birds in the Isle of Man. The study builds on the work of the Manx Bird Atlas and many other bird censuses and surveys undertaken across the island, as well as recent and historic literature. 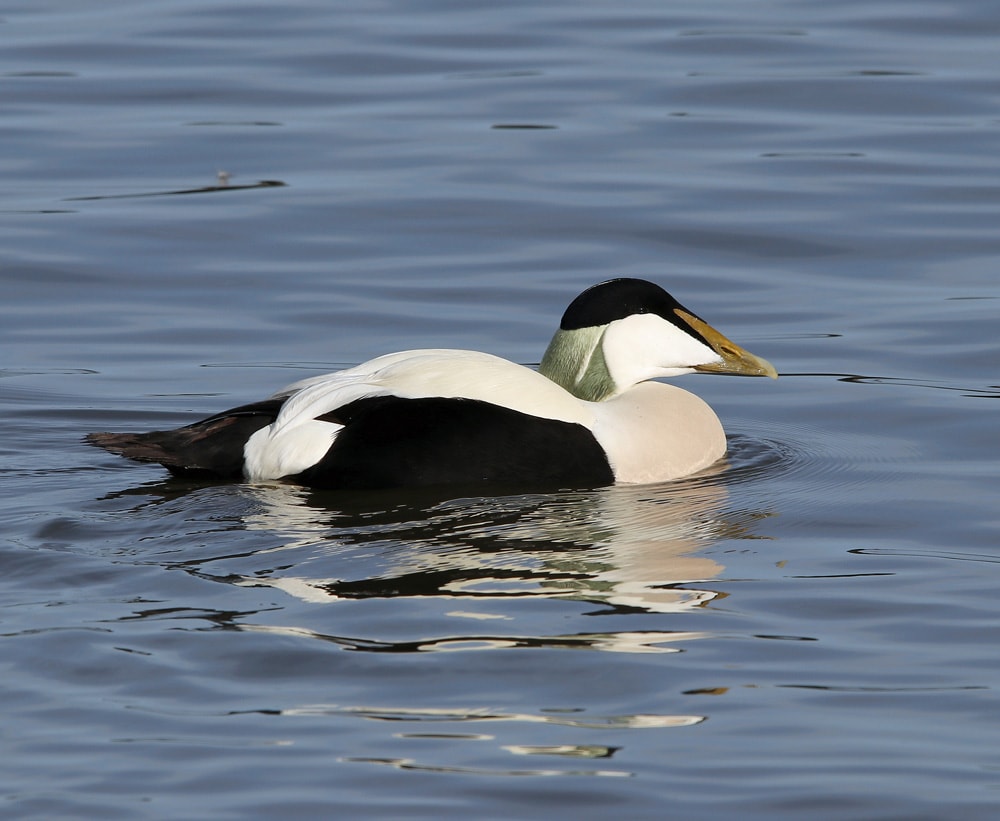 Common Eider has been added to the Manx Red List (John Derick Elvidge).

Of the 332 species recorded on the official Manx List of Birds, 166 resident and frequently visiting species were fully assessed using detailed data on their breeding, wintering and migratory populations and ranges, as well as short-term and long-term changes in their fortunes. The 166 species that were not assessed are those that only infrequently visit the Island. Of the 166 species that were fully assessed, some 48 (29%) were red-listed as being of the greatest conservation concern.

The red list primarily represents species whose decline on the island is of gravest concern. Eurasian Curlew, Puffin, Eurasian Skylark and Tree Sparrow are among those red-listed. Corncrake, Whinchat and Yellowhammer are also red-listed for now – as required by the internationally accepted methods of the assessment – though Manx BirdLife expects to add these to the black list in the very near future as they have almost certainly been lost as Manx breeding birds.

While Common Eider, Eurasian Oystercatcher, Redwing and Meadow Pipit remain a relatively common sight on the Island, their overseas populations are considered to be threatened and so they too are put on the red list.

BoCCIoM 2021 does provide some good news. The Island is home to nearly a third of all British Chough and has significant populations of Hen Harrier, European Shag and Peregrine Falcon among others. For these species, the Isle of Man has a heightened international responsibility to safeguard its healthy populations.

Neil Morris, Managing Director of Manx BirdLife and Director of the BoCCIoM 2021 project, said: "The assessment reveals the state of wild birds in the Isle of Man. Overall, it is not a happy picture. Our birds are being pushed off the Island, their habitats are disappearing and their populations are declining. Diversity and abundance are probably at a historic low.

"We are indebted to Chris Sharpe who undertook the mammoth task of compiling all the data for the assessment. And we are grateful to the Scheinberg Family for their support and to the many people who over the years have helped to collect the datasets needed to produce this seminal assessment."

BoCCIoM 2021 is endorsed by the Manx Ornithological Society, Manx Wildlife Trust, Manx National Heritage and the RSPB. A paper by Neil Morris and Chris Sharpe describing the project and its findings will be published in the September 2021 issue of British Birds.