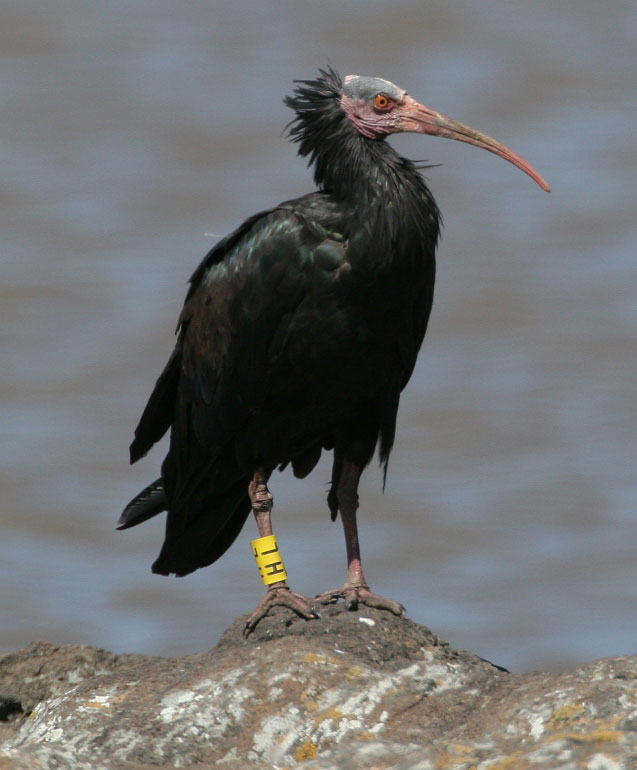 Researchers from the RSPB and BirdLife Middle East have tracked a group of Northern Bald Ibis on their 1,900-mile (3,100-kilometre) journey from breeding grounds in Palmyra, Syria to the highlands of Ethiopia.

Ethiopian conservationists found the trio and a fourth bird last week. In total, 13 Bald Ibis left Palmyra in July and scientists are hoping that the other birds will join them or are close by. Their task now is to protect the birds while they migrate and so increase their numbers.

Chris Bowden, Bald Ibis specialist at the RSPB, said: "Knowing where these birds go and how they get there is a major breakthrough. They have been in Ethiopia since August and are likely to stay there until they return to Syria."

"We thought the birds would go to Yemen, Eritrea or Somalia and were surprised at the length of their journey and the speed with which they covered the distance."

"They have chosen their site well because Ethiopia is famous for its protection of wildlife and their last port of call was Yemen where the government is also supportive. This has answered a big question mark that remained for this species, and one that we feared we might never resolve."

Northern Bald Ibis were rediscovered in Syria only four years ago and the group is one of just two wild populations of the species in the world. The other is in Morocco, mostly in the Souss-Massa National Park, south of Agadir.

Despite breeding well in Syria where the birds are protected by Bedouin nomads and Syrian government rangers, the colony's numbers have not increased. Scientists fear that hunting, overgrazing or the heavy use of pesticides including DDT somewhere on the birds' migration route is keeping numbers low.

The tracked birds reached Ethiopia via Jordan, Saudi Arabia and Yemen, where they spent three weeks. Six birds were seen in Yemen before at least four crossed the Red Sea to Ethiopia.

Northern Bald Ibis were last seen in Ethiopia in 1977 but their current site is remote and the terrain difficult, which may explain why they have not been seen since.

Scientists will now learn what local people know of past visits by Bald Ibis to Ethiopia. Measures to protect the birds elsewhere could include replacing harmful pesticides or making hunters aware of how rare the Northern Bald Ibis is.

Mengistu Wondafrash, Team Leader at the Ethiopian Wildlife and Natural History Society, was amongst those to find the ibis last week. He said: "As we searched, we were not getting any signals from the transmitters so finding the birds in such a remote area was a wonderful surprise. They were perched on a rocky outcrop close to a large pond and fairly close to a village."

"The area is used for livestock grazing but there were still many other species of bird using the pond and the area around it. We are very hopeful that the other Bald Ibis from Syria are nearby and we will be making a second visit to the area next month to try to find them. In Ethiopia, we will be doing all we can to implement conservation measures to help increase the numbers of this rare but special bird."

The Yemeni Environment Minister, Abdul-Rahman F. al-Eryani; also saw the birds while they were in Yemen. He said: "I was very excited to find that the birds could once more be seen in Yemen. We recognise the importance to our country of their migration and we will be waiting for them to return on their way back to Syria. We will do our very best to see them safely on their way."

Ibrahim Khader, Head of BirdLife Middle East, said: "We are optimistic that protection of the ibis in Ethiopia and Yemen will be good but the birds must still survive a perilous journey to get there each year. It is our job to make that journey safer. If we can do that, this population will have a much better chance of survival."

The Syrian population of Northern Bald Ibis is thought to be the last of a 1,000-strong group, which used to spend summers in the Middle East, notably at Birecik, south-east Turkey, 130 miles from Palmyra. These birds were thought to fly to Yemen, Saudi Arabia and Eritrea for the winter but this was never proved. Only a small, partially captive, population remains in Birecik. There are also captive populations in Austria and Italy.

Three pairs were found breeding near Palmyra in 2002 by the FAO/Italian Cooperation Project led by Dr Gianluca Serra. Two or three pairs have raised young each year since. Previously, breeding birds were last recorded in Palmyra in 1932.

The Moroccan population has risen from 59 pairs in 1997 to more than 100 pairs, and breeds on coastal cliffs within the Souss-Massa National Park. These birds stay in Morocco all year and are protected by wardens.

The route of the Northern Bald Ibis is being tracked at http://www.rspb.org.uk/tracking/northern_bald_ibis.asp.