Patchy fog meant she had to navigate carefully across the Cotswolds on her flight from Membury Airfield, but just before 3 pm she landed near Slimbridge Wetland Centre WWT, famous for its Bewick's Swan roost ever since Sir Peter Scott lived there in the 1960s. She was greeted by colleagues and volunteers from WWT headquarters who have been supporting her and following her progress online.

Sacha said: "It's a fantastic feeling to have touched down safely back in the UK, and to have been part of the incredible team that's seen this project through from start to finish. I couldn't have done it without the support of so many others. Bewick's [Swans] really are amazing birds and it's been an absolute privilege to accompany them on their annual migration, and to play a role in finding out how we can help more of them to make that journey." 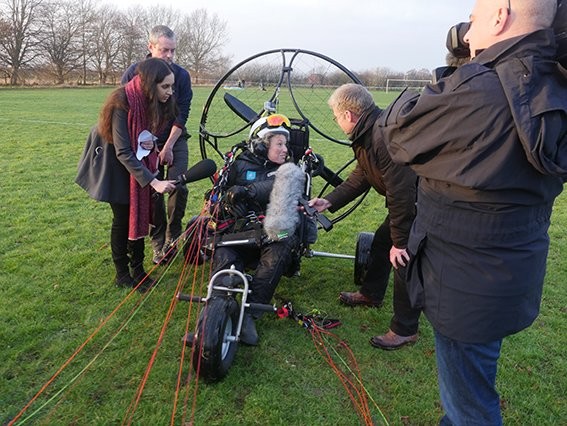 Sacha Dench is interviewed after landing in Britain (Photo: WWT).

Sacha's journey isn't quite over yet, as she'll head to 10 Downing Street tomorrow (Tuesday 20 December) to hand over a petition signed by 13,500 people asking for a commitment to create 100,000 hectares of new wetland habitat as safe refuge and feeding for swans and other wildlife.

On her journey following the swans, Sacha has passed through 11 countries, flown around 4,350 miles and visited 51 schools. Supporting her all the time have been a team of conservationists and filmmakers, as well as a mechanic and a medic. Along the way they have been investigating possible reasons why the Bewick's Swan population has declined by more than a third in the last 20 years. Together with local wildlife organisations, they have held workshops, meetings and conferences all along the swans' migration route that have brought together scientists and practitioners from throughout society who can help the swans.

Sacha's unusual mode of transport meant that she was able to talk about the swans' plight with people who don't usually speak to conservationists, either because they are physically cut off from the rest of society on the Arctic tundra or because they don't have a formal interest in wildlife.

Over the coming months, Sacha, her WWT colleagues and their partners along the swans' flyway will process all the information gathered and refine their plans for saving the species.