One of Scotland's most iconic species, Golden Eagle, has the chance to become a more widespread sight across the south of Scotland following a successful Heritage Lottery application bid.

The South of Scotland Golden Eagle project has confirmed funding of over £1.3 million from the Heritage Lottery Fund and can move ahead with plans to boost numbers in Dumfries and Galloway and the Scottish Borders. This is a key project under the 2020 Challenge for Scottish Biodiversity. The project is a partnership of RSPB Scotland, Scottish Land and Estates, Forestry Commission Scotland, Scottish Natural Heritage, Buccleuch and the Langholm Initiative, who have been working together for more than ten years to bring this project to realisation.

Presently there are only two to four breeding pairs of Golden Eagles in the south of Scotland, despite a supporting project study showing that there is suitable habitat for between up to 16. The project has also identified that the best way of enhancing this fragmented and vulnerable population of eagles is through increasing the supply of young birds, which will eventually recruit into the breeding population. Recent satellite tagging work in Scotland has shown that the southern Scottish Golden Eagle population is greatly isolated from larger populations of this species in the Highlands.

Work will start on the project this autumn, subject to the approval of a licence application lodged with Scottish Natural Heritage. In summer 2018, and for the next four years, the project intends to bring five to 10 eagles south to the region. The project team will use tried and tested methods to rear and release the young Golden Eagles, these derived from previous White-tailed Eagle and Red Kite reintroduction projects, and through the cooperation of raptor experts and estates. The project team will collect single eagle chicks from broods of two young in the Highlands and raise and release them in an undisclosed location in the Borders. 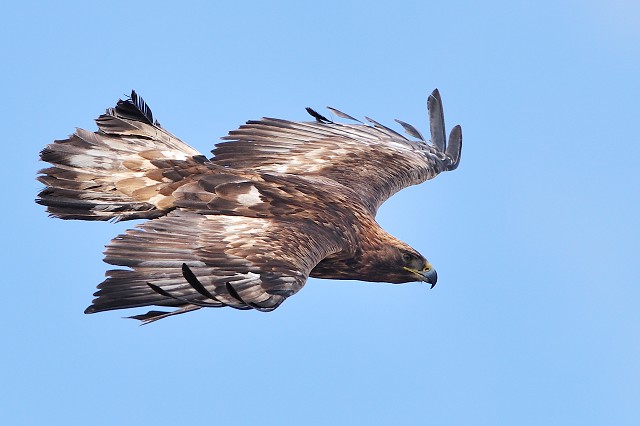 The initiative has had the sustained support of Cabinet Secretary for Environment, Climate Change and Land Reform, Roseanna Cunningham MSP, who said: "Many congratulations to all involved in gaining such tremendous support from the Heritage Lottery Fund. This will ensure Golden Eagles have a secure footing in the south of Scotland, and will bring huge benefits to the local economy and communities through a variety of tourism and educational opportunities. I commend the efforts of this special partnership."

"This venture is not just about birds, but is also about people, and in the coming months we will continue to work closely with people living and working in the south of Scotland so everyone can get behind our endeavour.

"The Langholm Initiative will have a key role in hosting the project and in fostering the long-term economic and social benefits to enhance the influence and legacy of this project. I thank the Heritage Lottery Fund for their huge support – it is fantastic news for nature."

Project Manager, Cat Barlow, added: "We are thrilled to be given this excellent news. Once we have the full funding package in place we can crack on in employing the team to take the work forward. Then the really exciting work begins as we see more Golden Eagles and the people of south Scotland rallying to promote this wonderful area for wildlife.

"One of our first jobs will be to appoint two local officers who can work in the community to build support in advance of the first eagles' arrival.

"In the years ahead many hundreds of people will have the opportunity, through trails, events and CCTV, to learn more about the Golden Eagle and its role in Scotland's biodiversity. I hope it will inspire and empower them to safeguard its existence for future generations.

"I'd also like to highlight the support of members of the Scottish Raptor Study Group who have agreed to supply their considerable expertise of Golden Eagle conservation to the project."

Each released golden eagle will be satellite-tagged to ensure the project team builds up as much information as they can on the ranging behaviour, survival, and health of the birds. They are working with a variety of expert advisers, including specialists from the Edinburgh University Dick Vet School, and from Ireland and Spain who have been heavily involved in successful raptor reintroduction programmes.