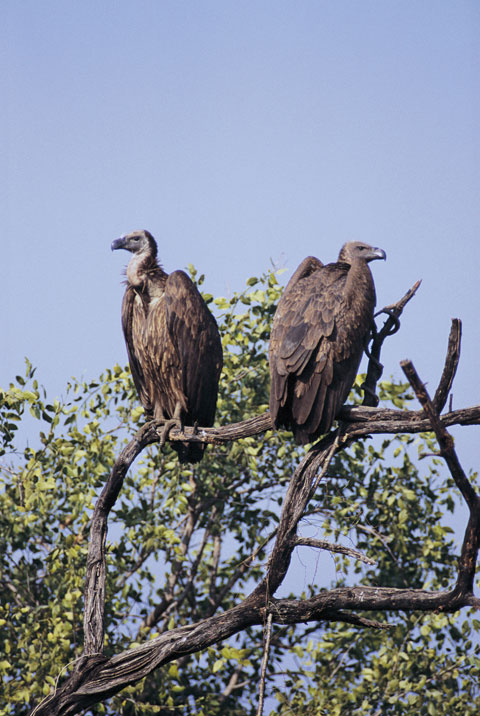 The Oriental White-backed Vulture chick hatched last week at the breeding centre in northern India belongs to one of three Asian vulture species facing a grave threat of extinction. Asian vultures have declined by between 97 and 99 per cent and scientists did not expect the birds to breed in captivity until at least 2008.

Dr Vibhu Prakash, Principle Scientist for the vulture breeding programme said: "This is the most precious new year gift from nature to vulture conservation. The egg was laid in November and since then we have been waiting and hoping. This success shows that we have got the conditions right, so now we can plan ahead with confidence to breed many more vultures in the future."

Vultures are nature's most efficient scavengers but many millions of Oriental White-backed, Slender-billed and Long-billed Vultures have died in south Asia in the last 12 years, after feeding on the carcasses of livestock treated with the drug diclofenac shortly before death.

The veterinary use of diclofenac is now being phased out in India, Pakistan and Nepal. In January 2006, scientists from the RSPB, ZSL and elsewhere proved that the drug meloxicam was a suitable, and safe, alternative.

The breeding centre where the chick has hatched, in Pinjore, Haryana, is one of two set up to house wild birds caught to protect them from remnant uses of diclofenac. The other centre is at the Buxa Tiger Reserve in West Bengal.

Conservationists believe it will be at least ten years before diclofenac is no longer a threat. Vulture numbers are now so low that the he birds' survival is largely dependent on captive breeding success.

Chris Bowden, Head of the RSPB's Vulture Conservation Programme said: "The hatching of this vulture chick is a hugely important milestone and shows that the vulture breeding programme really can help save the vultures once diclofenac is removed from the environment."

"Most of the 130 vultures at the breeding centres were collected as nestlings, so are far too young to breed. So this early sign of success gives us confidence that the conservation breeding programme is on track."

Dr Asad Rahmani, Director of the Bombay Natural History Society said: "The ban on the killer drug diclofenac must be implemented urgently and effectively to make sure these vultures have a future. The increasing availability of meloxicam means that farmers and vets can switch to the new drug. But this must happen immediately, if we are to avoid losing the last remaining wild vultures."

Rapid vulture declines were first seen at the Keoladeo National Park, Bharatpur, Rajasthan. Numbers of breeding pairs in the park declined steadily through the late 1990s and by 2000 there were no breeding pairs left.

Vultures are declining by between 22 and 48 per cent each year in India. They die within days of consuming flesh from the carcasses of diclofenac-treated cattle and water buffaloes.