High risk of deer road accidents in May

To avoid accidents, motorists should slow down and be on the lookout for deer on the road in May, warns Scottish Natural Heritage (SNH). Vehicle accidents involving deer peak at this time of year as yearling animals disperse to look for their own territories. Because of this, SNH (in conjunction with Transport Scotland) are placing warning messages on variable messaging signs on high-risk trunk roads across Scotland from Monday 29th April through to Friday 31st May. The signs are targeted on roads with higher rates of deer–vehicle collisions, covering areas of the Central Belt around Glasgow and Edinburgh, as well as Stirling, Kinross, Perth, Dundee, Aberdeen and Inverness. Signs warn motorists of the high risk of deer on road. 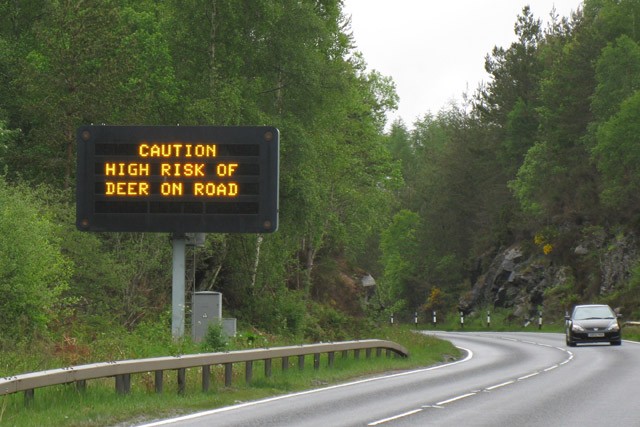 The most recent research shows that there are more than 7,000 collisions between motor vehicles and deer every year in Scotland, with an average of 65 of these resulting in human injuries. The combined economic value of these accidents — through human injuries and significant damage to vehicles — is around £7 million. Across the UK, it is estimated there are between 42,000 and 74,000 deer–vehicle related accidents a year, resulting in 400 to 700 human injuries and about 15 deaths, with an annual cost approaching £47 million.

The Deer Vehicle Collisions Project reports that the road sections with highest recent accident rates at this time of year include the A9 (Dunblane to Perth; Bankfoot to Pitlochry;); A85 (Methven to Perth); A90 (Dundee to Brechin; Stonehaven to Aberdeen); M80 (J1 to A80M Haggs); and A1 (Musselburgh to Lamberton). The areas with the greatest numbers of urban area deer–vehicle collisions are centred on Glasgow and Aberdeen. Dr Jochen Langbein of the Deer Initiative said, "The fact that only around one-fifth of all UK deer–vehicle collisions occur in Scotland doesn't mean the risk to drivers here is any lower. On the contrary, the risk of deer collisions per driven mile is actually greater in Scotland, as total traffic volumes in England are nine times higher than in Scotland." 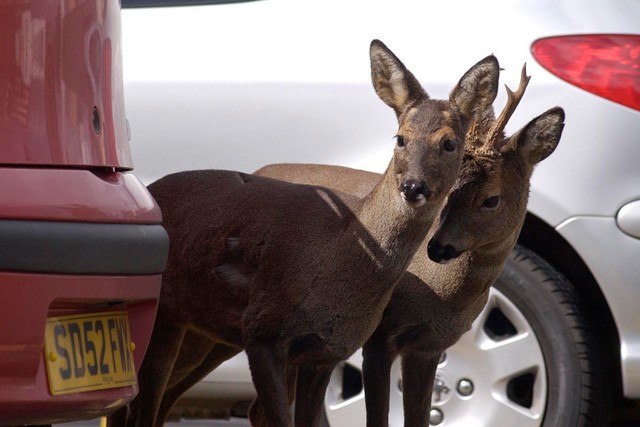 Deer and humans are increasingly coming in to contact (Photo: Jochen Langbein).

Sinclair Coghill, SNH wildlife management officer, added: "We should all be aware of the risk of deer on the road when we're driving, especially at this time of year. This is becoming more and more of an issue in the Central Belt and around our towns and cities — it's not just a problem on remote Highland roads, as many people think. We'd ask motorists to slow down and watch for deer crossing in front of traffic. Be particularly alert if you're driving near woods where deer can suddenly appear before you have time to brake. If you do hit a deer, report it to the police, as the deer may be fatally injured and suffering."