A total of 13 Hen Harrier chicks have fledged this summer in the Tarras Valley Nature Reserve as the community land buyout goes from strength to strength.

This harrier monitoring scheme was set up owing to the community's £6 million purchase of more than 4,500 ha of Langholm Moor from Buccleuch Estates in Dumfriesshire. It was the largest-ever community buyout to take place in the south of Scotland.

Nest cameras were set up and one of the birds, named Charlie, was fitted with a satellite tag as part of an RSPB Scotland and Hen Harrier Action initiative. A spokesperson for the reserve said protecting the raptors – meaning they are among the rarest birds in the UK – was an important aim and the reserve would help transform the species fortunes. 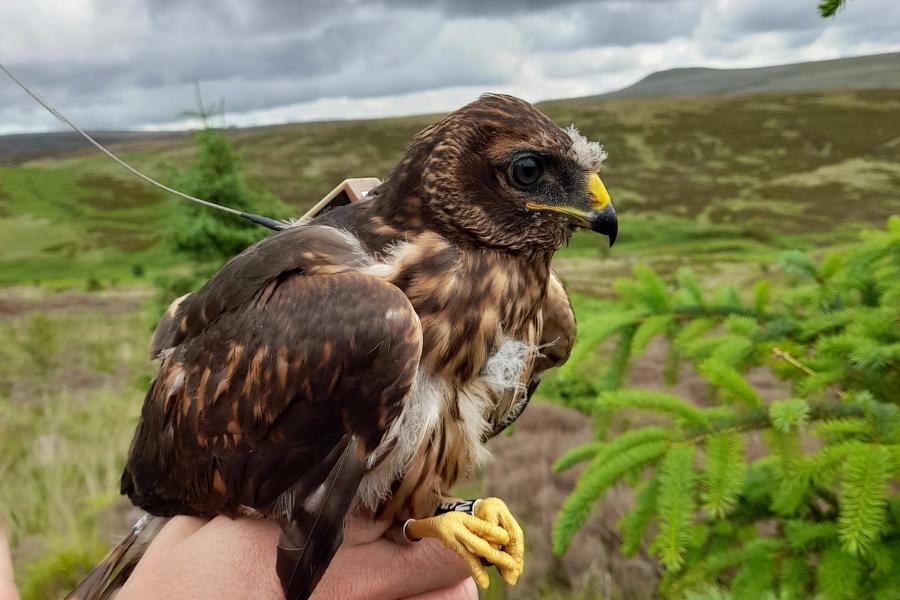 One of the young harriers after being fitted with a GPS tag (RSPB Scotland).

They said: "Langholm Moor is a place where people can be inspired by wild nature as they watch Hen Harriers skydancing above the dramatic hills of a former grouse moor. The success of our community land buyout, and the resulting creation of our nature reserve, means we have the opportunity to play a role in transforming the fortunes of this species and many others too.

"Ensuring a haven and a better future for Hen Harriers is an important part of what we are setting out to achieve. We've already had a successful year, with 13 chicks fledging."

Further good news has come with the community land buyout set to double in size to more than 4,200 hectares, following a mammoth fundraising effort. Some 2,100 ha of more land has been purchased and will join the first, similarly sized plot the community secured last year, thereby maximising the benefits of the Tarras Valley Nature Reserve for people, nature and climate on precious peatland.

"This is about a grassroots fightback against the climate emergency and biodiversity crisis, and helping to create a better future," said Jenny Barlow, estate manager of the reserve.

"It's been a rollercoaster, but the generosity and unwavering support of so many wonderful donors and volunteers have got us over the line in the nick of time."