Another satellite-tagged Hen Harrier has vanished in suspicious circumstances in Scotland – the fourth to disappear on a Scottish grouse moor since the beginning of April.

Fingal, a young male, hatched from a nest in the Scottish Borders in summer 2019 and was fitted with a lightweight satellite tag as part of the EU Hen Harrier LIFE project which has allowed scientists to track his movements. He remained in this area for the first few months before spreading his wings and making a tour of northern England, stopping at sites in Lancashire, South Yorkshire and Cumbria. After returning to Scotland he settled in Dumfries and Galloway for the rest of the winter. 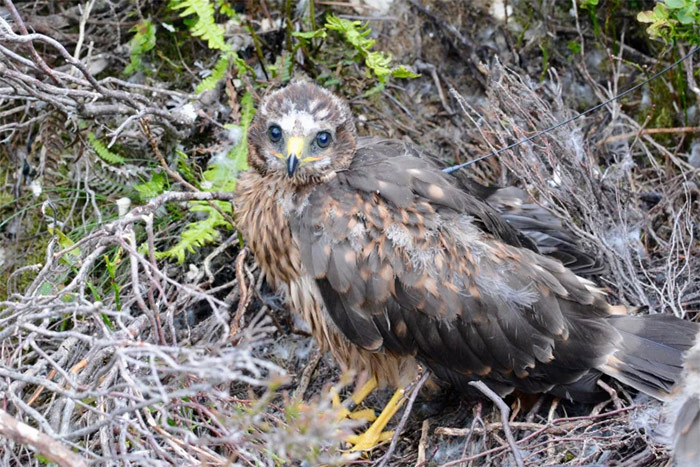 Fingal, the young male Hen Harrier that has vanished in Dumfries and Galloway (RSPB Scotland).

In mid-March 2020 Fingal moved a short distance into the southern Lowther Hills. The last location transmitted from his tag, which was funded by Lothian and Borders Raptor Study Group, came on 19 May 2020 from an area moorland managed for gamebird shooting to the east of Thornhill, Dumfries and Galloway.

Police Scotland carried out a search of the area but found no trace of Fingal or his tag. It has not transmitted since. When a satellite tagged bird dies of natural causes, the tag continues to transmit allowing the body to be recovered. Independent peer-reviewed studies have shown these tags to be highly reliable, so having four fail, in very similar circumstances, all on grouse moors, strongly suggests human interference.

Fingal is the 45th known Hen Harrier to have disappeared in suspicious circumstances or been confirmed to have been illegally killed in the UK since 2018. Ian Thomson, RSPB Scotland's Head of Investigations, said: "This has become a depressingly familiar story. Yet again a satellite-tagged bird of prey has disappeared suddenly and inexplicably on a grouse moor and is presumed killed.

"These birds will continue to disappear until grouse shooting estates are licensed. Self-regulation by the industry has demonstrably failed, and it's long overdue that the Scottish Government addressed this by introducing robust regulation where a right to shoot is dependent on legal management of the land."