A Spoon-billed Sandpiper photographed last week by birdwatcher Peter Ericsson on wetlands at Pak Thale, Thailand, has been identified as bird 'AA', which was hand-reared and released in Chukotka, Russia last summer as part of the effort to save the species from extinction. Spoon-billed Sandpiper is one of the rarest birds in the world and consequently is one of the most difficult to find once it leaves its known breeding area for the winter months. This is the first time a hand-reared individual has been identified in the wild by the unique code on its plastic leg flag. Last autumn there were three sightings of Spoon-billed Sandpipers with white leg flags, indicating that they had been reared as part of the headstarting programme, but they were too distant for the codes to be read. We also reported on a lime-green-flagged bird photographed in China last autumn (further details here). 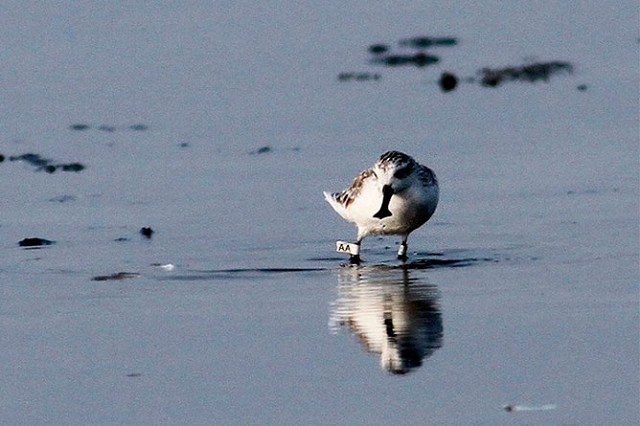 WWT aviculturist Roland Digby, who has reared bird 'AA' and many others on the tundra in Russia over the past two years, first spotted Peter Ericsson's sighting on a Facebook site. He said: "It was so exciting to see Peter's message. We rear these birds for a few weeks till they're ready to fledge and migrate, and then we have to let them go into a world where we know the odds are stacked against them. This particular bird always had a strong character. Its flag is AA because it was the boldest and the first to be picked up. It was independent as soon as I'd released it, disappearing off during the day and only returning at night to feed on mosquitoes. I last saw it on August 6th [2013] and never expected to hear of it again, but it's wonderful to hear that it's survived its first migration, found places to safely rest and feed and avoided the bird trappers' nets."

Hand-rearing is part of a plan to artificially boost the number of Spoon-billed Sandpipers in the wild while conservationists protect coastal wetlands and stop bird trapping along Asia's eastern and southern coasts. Also known as headstarting, last year it increased the number of fledglings leaving the birds' only known breeding grounds by 25%. It also allows conservationists to fit leg flags to the birds. Reported sightings give a measure of the success of different tactics to save the species and could potentially reveal new information about the birds. 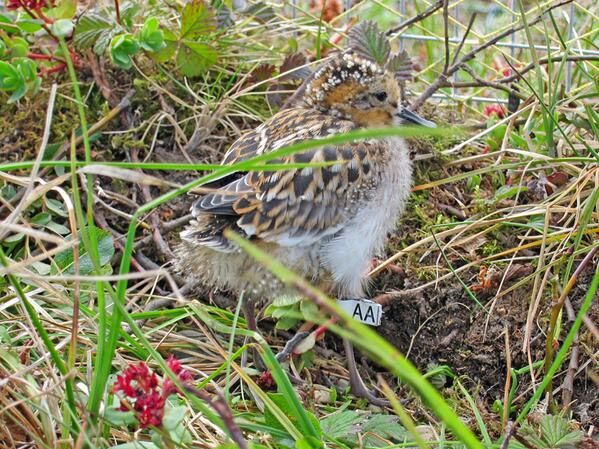 Dr Nigel Clark, of the BTO, is a leading wader expert and has been at the centre of efforts to conserve the species. He said: "This sighting is a fantastic bit of news. It shows that headstarting the birds is working and they are successfully migrating and it's starting to give us more clues that could be useful in future. This is the fifth sighting in Thailand of a bird from the Meinypil'gyno breeding grounds. Only time will tell if that's a coincidence, so I urge anyone in the region to keep their eyes out for leg flagged birds and report them if they see one."

Birdwatchers in Asia are asked to particularly look out for and report Spoon-billed Sandpipers with the following markings to sbsrecords@eaaflyway.net:

Further details on the ongoing Spoon-billed Sandpiper project can be found at http://www.saving-spoon-billed-sandpiper.com/.