Great Bustards on the rise

One of the most spectacular birds on the planet, the Great Bustard, looks set to consolidate its return to the UK with the team behind its reintroduction confirming the presence of four nests, with four chicks hatched so far this year. 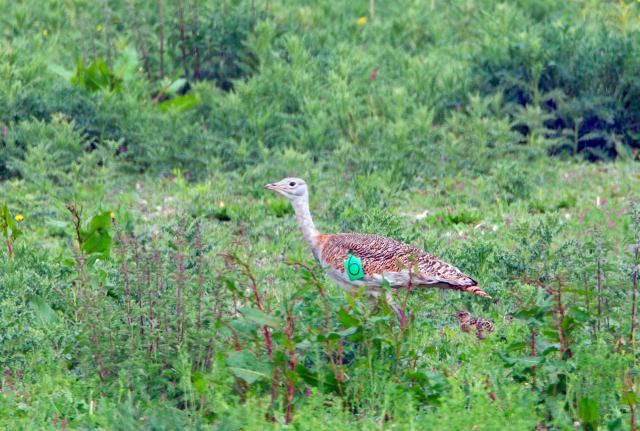 The Great Bustard, which became extinct in Britain as a nesting bird in 1832, successfully nested last year, when two pairs fledged two chicks on Salisbury Plain in Wiltshire.

David Waters, Founder and Director of the Great Bustard Group, said: "Last year was a milestone for the project; this year really does give confirmation that the project is well on its way to achieving its aims of a self-sustaining population in the UK. After so many years of work, it is great to see the results."

A reintroduction trial, led by the Great Bustard Group, began in 2004 using bustards reared from eggs rescued from cultivation in Saratov Oblast in Southern Russia. The chicks are reared in Russia in a partnership with the A.N. Severtsov Institute of Evolution and Ecology, a branch of the Russian National Academy of Science. When the chicks are about six weeks old they are flown into the UK, and after a period of quarantine they are released on to Salisbury Plain. The chicks are released under a licence issued to the Great Bustard Consortium (the Great Bustard Group, the RSPB and the University of Bath) by DEFRA.

The first bustard nest from the project was in 2007, and there were further nests in 2008 but the eggs from these clutches were infertile. In 2009 the oldest males became sexually mature, and the first Great Bustard chicks hatched in the wild in England after 177 years. Despite predictions that the inexperienced females would not successfully fledge chicks, two were fledged, although sadly one was predated shortly after fledging.

Dr Mark Avery, the RSPB's Conservation Director, said: "Restoring lost wildlife and lost landscapes to Britain are among the RSPB's most important objectives. The encouraging signs that the return of the Great Bustard is edging closer is fantastic news. There are still some noticeable species gaps in England, but we will strive to restore some of those species which Man has thoughtlessly removed over successive generations."

David Waters added: "This year we are aware of four Great Bustard nests, and that so far four chicks have hatched. In spite of their considerable size, nesting females are notoriously hard to find, and thus other females are suspected of nesting in addition to the four we are aware of. We very much hope these females will turn up with their youngsters later in the autumn, since the mother–offspring bond is especially strong and long-lasting. Since each mother has a tag, we will be able to tell which mothers were the 'super-nannies'." 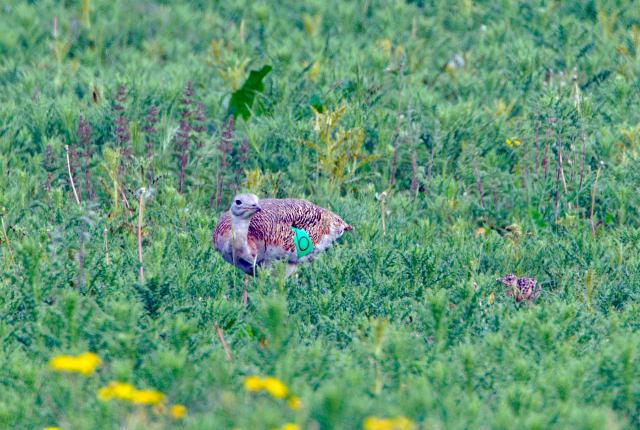 The nest sites are kept secret due to fears of pressure from birdwatchers and the eggs were marked with a special permanent DNA glue to deter and to help prosecute egg collectors.

The Great Bustard is a slow bird to mature, so it has been a long wait to get this far, but this could not be speeded up. A small UK population of about 18 birds has been built up, but it is only when this population begins to produce its own young and becomes self-sustaining that the project can be judged as successful. Two years of successful breeding and increasing number of nests indicate last year was no fluke, and that the Great Bustard is well on its way back to being established in the UK.

The reintroduction project has been led by the Great Bustard Group. It is a charitable membership organisation. The Great Bustard Group has largely funded the whole process itself, from gaining the required licences and permissions through to renting the land. It needs about £130,000 a year to fund the whole project, even allowing for a great deal of assistance given without charge by volunteers and project supporters and sponsors. The RSPB provide direct financial support to the project and share the experience and expertise of its staff. The University of Bath funds a three-year PhD project to investigate ecology and behaviour of the Great Bustard, and to monitor the movement of reintroduced birds.