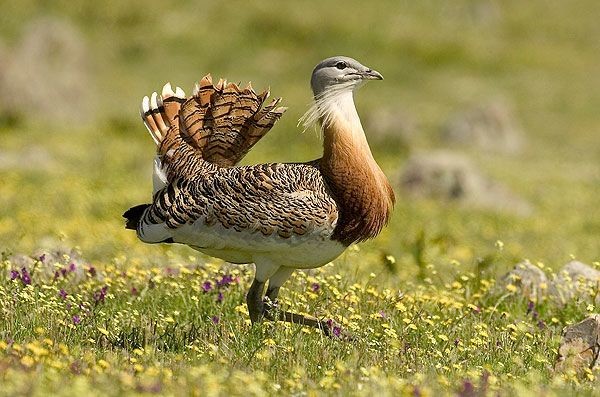 Earlier this spring a female Great Bustard from the GBG reintroduction trial in Wiltshire nested and laid two eggs. Due to fears of egg thieves and disturbance from birdwatchers, the announcement was delayed and the location of the nest is being kept secret.

This event is enormously exciting and a huge milestone in the quest to return this magnificent bird to Britain. The last wild Great Bustard eggs were laid in 1832 when Queen Victoria was a young girl and would not be crowned for another 5 years and steam had not yet replaced sail on the world's oceans.

David Waters GBG Director, said "It had been thought 2008 would be the first year that nesting activity would be seen and it is a tremendous boost to have this happening earlier. Although males were seen displaying to females this spring, it is understood that males have to be about five years old before they can breed. The eggs were incubated by the female, but then abandoned and, after examination, found to be infertile. This is likely to be linked to the young age of the males. Significantly, only birds in good condition produce eggs. Hungry or stressed wild birds do not produce eggs so this is a strong indication of the success of the project."

2007 has been a tremendously encouraging year for the Great Bustard Project. The birds are released on Salisbury Plain and each autumn and winter move away from the home site returning during the spring. This year more than ever have made the return journey, including two males which had not been seen anywhere for over 18 months.

It is known Great Bustards travel considerable distances during the winter months, but it is very encouraging to have them return, not just to Wiltshire, or to Salisbury Plain, but to the very site of their release.

GBG Project Officer Al Dawes says "Great Bustards are notoriously shy and secretive birds, so keeping track of them is a big challenge. It is a credit to farmers and landowners that they keep us informed of the birds' whereabouts, which led to the discovery of the nest this spring."

David Waters, GBG Director says "These first steps towards achieving a breeding population of wild Great Bustards in the UK are a confirmation of the success of the GBG's methods of release."

The chicks are raised in Russia from eggs rescued from nests destroyed by cultivation. Despite coming from Russia, they have taken the release area as being the natal site. The Great Bustard, despite being such a high profile feature of the British countryside, is referred to as an Alien Species by the Government and as such the project to restore it is cut off from most funding sources, relying almost exclusively on private donations and sponsorship.