Delegates at the Conference of the Parties to the Convention on the Conservation of Migratory Species of Wild Animals (CMS) in Bergen, Norway are poised to adopt new guidelines on how to avoid birds being killed by power line collisions and electrocutions. The Guidelines on How to Avoid or Mitigate the Impact of Electricity Power Grids on Migratory Birds in the African-Eurasian Region are a set of concrete recommendations for governments, power companies and conservation organisations. They are based on a major study reviewing the impacts of electricity power grids on birds in the African-Eurasian region, and how best to minimise them. 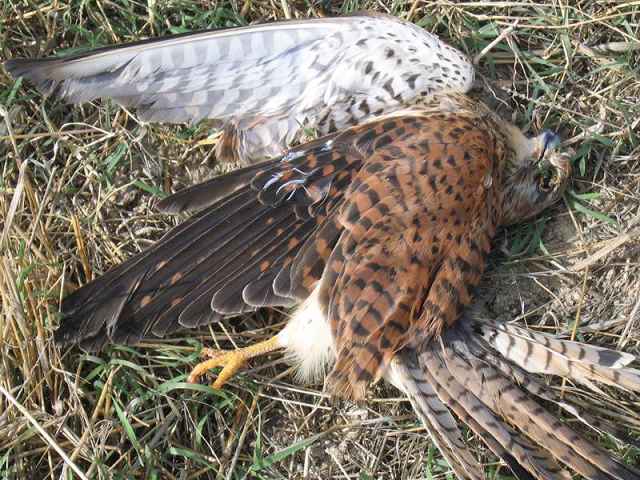 A Kestrel — just one of hundreds of thousands of power line victims (Jorge Lozano-SEO/BirdLife).

The review shows that, in the African-Eurasian region alone, hundreds of thousands of birds die annually from electrocution, and tens of millions of birds from collision with power lines. For some large, slow-reproducing species that migrate across this region, death tolls are causing population declines that could lead to local or regional extinctions. "Protecting birds from existing or planned power lines is a global issue and it's vital that best practice, innovations and experience are shared," said BirdLife International's Director of Science, Leon Bennun. "Migratory birds ignore national boundaries, so their future depends on international action to minimise the risks caused by electricity networks that cross flyways. With major expansion of electricity infrastructure ongoing across the world, the adoption of these guidelines by CMS is very timely."

BirdLife has a long track record in this area, with earlier guidelines compiled or supported by NABU (BirdLife Partner in Germany). BirdLife Partner organisations were major contributors to the review and guidelines, providing research, recommendations and practical mitigation measures. For example, in South Africa, 11–15% of Ludwig's Bustards die annually in collisions with a growing number of power lines. Research by BirdLife South Africa's Executive Director Mark Anderson during the early 2000s showed that every kilometre of power line in the eastern Karoo kills one Ludwig's Bustard per year. Because of the rapid decline in population caused by these collisions, the species was uplisted from Least Concern to Endangered in 2010.

Information provided to the review by BirdLife Finland, based on analysis of Finnish Ringing Centre data, revealed that 46% of all ringed birds that died of electrocution between 1980 and 2003 were Eagle Owls, 22% Ural Owls, and 11% Tawny Owls.

The review also describes an EU-LIFE project launched by BSPB (BirdLife Bulgaria) in 2010 to mitigate collisions and electrocution of birds in the Bourgas Wetlands, which includes a number of Important Bird Areas. Project activities include identification of dangerous power lines within one kilometre of the lakes, and insulation of dangerous poles.

Meanwhile, BirdLife data (and tools developed by BirdLife) are being used to prepare national "conflict hotspot maps" by combining information on the national power line network, Important Bird Areas, and data on the locations of critical sites for collision-susceptible species derived from the Critical Site Network Tool, which was developed by BirdLife and Wetlands International as part of the UNEP-funded Wings Over Wetlands Project.