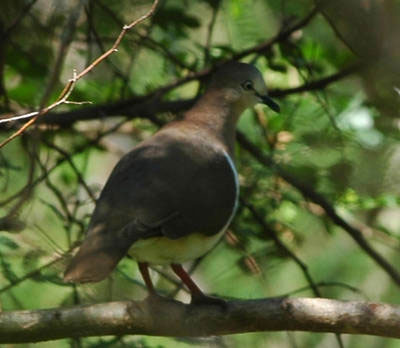 A 'high-end luxury resort' threatens one of the last remaining refuges for the Grenada Dove, a Critically Endangered species with a global population of just 180 birds. In an unprecedented move the Government of Grenada looks set to sell the whole of the Mount Hartman National Park to make space for a Four Seasons Resort, on the basis of its biodiverse location and "sea-view".

The Mount Hartman National Park - also called 'The Dove Sanctuary' - in the south-west of Grenada, supports at least 22% of the global population of the Grenada Dove - equating to just 20 pairs. With such a low population in just a few remnant patches of forest, Grenada Dove is facing an extremely high risk of extinction in the near future.

The Sanctuary was created 10 years ago, in order to mitigate for habitat removal elsewhere on the island, partly from development. This year saw the opening of a visitor centre to mark the educational value of the park for tourists and local people. But now the proposed hotel project, supported by the Four Seasons Hotels and Resorts group, plans a 150 room hotel, 300 luxury villas as well as a golf course, marina and conference centre. Dove Sanctuary was chosen on the basis of its natural surroundings, a rare commodity in Grenada today, and the unimpeded sea-views that abound throughout it.

Dove Sanctuary has been identified by BirdLife International as an Important Bird Area (IBA) for the Grenada Dove and for eleven other species that occur only on Grenada or in the Caribbean region like Antillean Crested Hummingbird Orthohyncus cristatus and Grenada Flycatcher Myiarchus nugatory.

Of the proposed development David Wege, Caribbean Programme Manager at BirdLife International said: "There is more at stake here than just the removal of crucial habitat. The dwindling Grenada Dove population will suffer further from increased isolation, from human disturbance, from non-native animals and with the planting of non-native 'aesthetic' vegetation. Such a development in the heart of the Grenada Dove's largest and most well-protected strongholds might lead to the eventual extinction of this species."

The news represents a complete turn-around in the Government of Grenada's policy regarding the island's unique biodiversity. In March of this year, Senator the Hon. Ann David Antoine, Minister of Health, Social Security, the Environment and Ecclesiastical Affairs in Grenada, spoke confidently to an audience of the Global Island Partnership saying: "Our region recognises the importance of conservation" and that "We aim to act responsibly as stewards of unique island biodiversity".

However, on the basis of the recent news, conservationists based in the region and internationally are outraged and remain wholly unconvinced. Respected authors, Margaret Atwood and Graeme Gibson, Honorary Patrons of BirdLife's Rare Bird Club, have notably lent their support to the protest:

"There's a terrible irony in the Government's willingness to critically compromise the continued existence of the Grenada Dove - which as the island's National Bird is a symbol of the country's distinctiveness and its culture - simply to provide sea-views to people from away. They should build somewhere else."

"For the Government to sell off one the island's most prized natural resources to make space for a high-end luxury development sets a clear message: the Government of Grenada has a complete disregard for environmental protection," said Wege.

Ecotourism in the Caribbean:

For the Government of Grenada, the motivating factors behind the decision to sell off the National Park are mainly economic; particularly relating to encouraging foreign investment and increasing local employment. As well as these immediate economic benefits, the 'Trickle Effect' - whereby neighbouring hotels and tourist operators benefit from increased 'high-end' tourism - has been cited as another reason to push for the resort. However, Wege is keen to stress the economic value of retaining as much of the forest commodity in Grenada as possible:

"The 'Trickle Effect' and arguments like it, are irrelevant if the natural environment on which tourism depends is removed." states Wege.

Elsewhere in the Caribbean, the rise of ecotourism has led to an evolution of environmentally-friendly resorts and lodges - all of which value 'low-impact' methods, whereby informed developers are heavily focused on minimum site impact, energy-efficiency and guest education.