Gove speech gives hope but is light on content

At a Parliamentary Reception at the House of Commons organised by the RSPB yesterday, the new Secretary of State for Environment, food and Rural Affairs, Michael Gove MP, gave a speech outlining his intentions for the job over the Brexit period and beyond. Also present and giving speeches were RSPB President Miranda Krestovnikoff, RSPB Chief Executive Mike Clarke and Chair of the Environmental Audit Committee, Mary Creagh MP.

In her opening speech, Mary Creagh stated her intent to ensure that the 80 per cent or so of environmental laws that have originated in the EU will be retained in UK legislation after Brexit. Shortly after this speech, a majority of MPs voted for their ability to bypass Parliament to speed Brexit through, ostensibly to be able to retain such laws, though many had doubts and referred to the vote as a Conservative ‘power grab’.

Ms Creagh also stated her intent to encourage the recycling of plastics and to cut air pollution with the government’s Clean Growth Plan, while an enquiry into the retreat of Arctic sea ice is also on the agenda. She affirmed her intent to “scrutinise Brexit” and to make sure existing environmental laws “are not watered down”.

Mike Clarke underlined the fact that Britain’s wildlife would remain trans-European after Brexit and that the RSPB intended to continue its international objectives to mitigate for climate change and ensure that the organisation will continue to pursue its major commitments under the Convention on Biological Diversity. 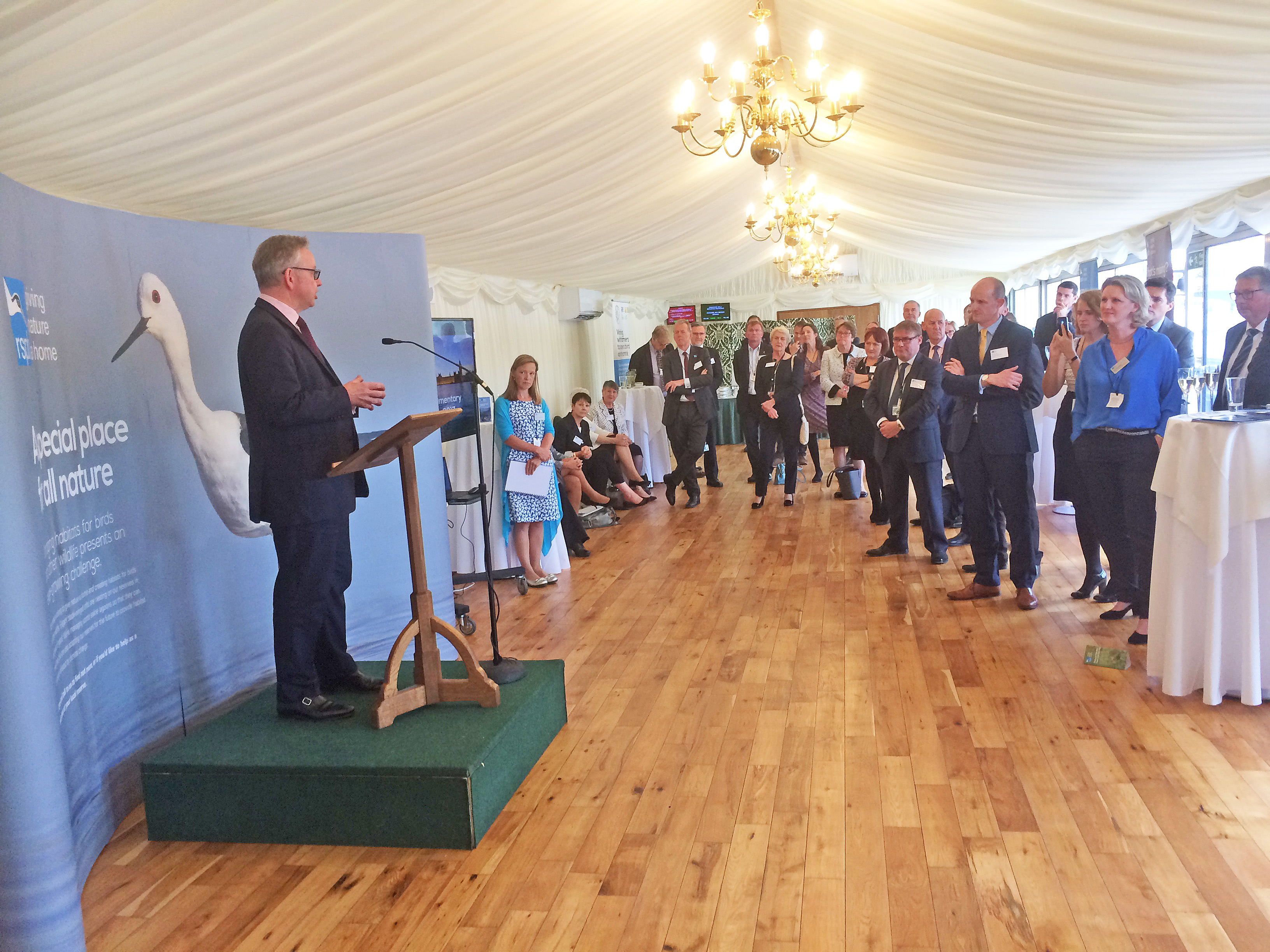 Mr Gove – sporting a Hen Harrier lapel pin – then took the podium for his first speech to conservationists, as well as wildlife journalists and MPs from across the spectrum, from the Green Party’s Caroline Lucas to the Conservative Party’s Michael Fabricant.

He claimed that his new regime would see that a “green Brexit” was instituted, and that he intended to not just conserve the environment but “generate improvement by enhancing habitats and attracting new species” – achievements which the RSPB and Wildlife Trusts have already successfully begun over the last few decades.

As laws begin to be transferred from the EU, he said that it was the government’s responsibility to “address the enforcement gap”. Drawing attention to the flaws in the EU’s agricultural policies, he said that we had “the opportunity to recast agricultural support” and reverse the radical drop in farmland bird diversity since 1970 and redesign the farming support system in favour of sustainability. Acknowledging the Labour Party’s creation of the Climate Change Act 2008, he stated his intent to build on the successes of that policy.

While Mr Gove was essentially saying what those assembled wanted to hear, his own record on Green issues is somewhat worrying. He has previously voted against the UK Green Investment Bank and the setting of carbon dioxide targets, and in favour of the Badger cull, taxing renewable energy and fracking. While his speech yesterday showed his good intentions, his record as it stands shows less enthusiasm for the environment, and many conservationists will remain anxious about Brexit and the future of UK conservation.