Two of the three chicks from the famous Loch Garten Osprey nest have been fitted with satellite tags, which will enable people to follow their 3000-mile migration to West Africa later in the summer at www.rspb.org.uk/ospreytracking. The Osprey Centre celebrated its 50th year of showing people Ospreys earlier in the summer, and all three chicks look strong and healthy in this golden anniversary year. This is the second year that such tags have been fitted. The tags will transmit data which can be followed on the website, allowing the huge online audience to follow the fortunes of these young Ospreys as they travel to Africa, and their movements over the next few years ahead of their eventual hoped-for return to Scotland. 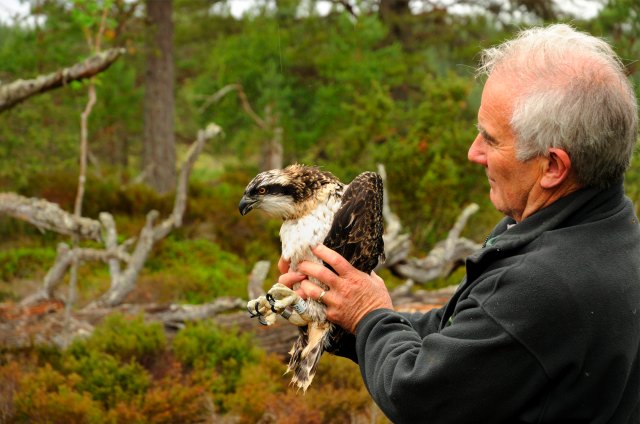 Highland Wildlife Foundation's Roy Dennis with one of the chicks. (Photo: RSPB)

Richard Thaxton, RSPB Scotland Loch Garten Osprey Centre manager, said: "It's been a fantastic season, with our new male Odin proving to be a brilliant father, supplying a regular stream of fish to our regular female EJ and the three chicks. We've had the usual ups and downs, but all three of them are doing very well and will be heading off to Africa towards the end of August. It's always sad to see them go, but of course we're just lucky to see the amazing Osprey life-cycle in action right here in front of us. By fitting these tags we can continue to keep up with how the birds are doing and learn much more about their migration routes, where they go and where they make stopovers on their way to West Africa.

"We tagged two young Ospreys last year, but unfortunately both perished. One seemed to get lost out in the Atlantic, whilst the other did make it, but is now presumed dead as the satellite data revealed that it had stopped moving back in April this year. Sad though this was, we learned something from this: that a lot of migrant Ospreys, and other birds, die in their first year. We all hope that this year's chicks, in our 50th anniversary year, will make it safely — and maybe even return to us one day!"

The Osprey Centre is open until the end of August, but people should hurry if they want to see the chicks before they leave. Alternatively, watch the nestcam at www.rspb.org.uk/lochgartenlive, or follow the migration at www.rspb.org.uk/ospreytracking.

The Osprey Centre is open daily from 10am to 6pm from 1st April until the end of August.