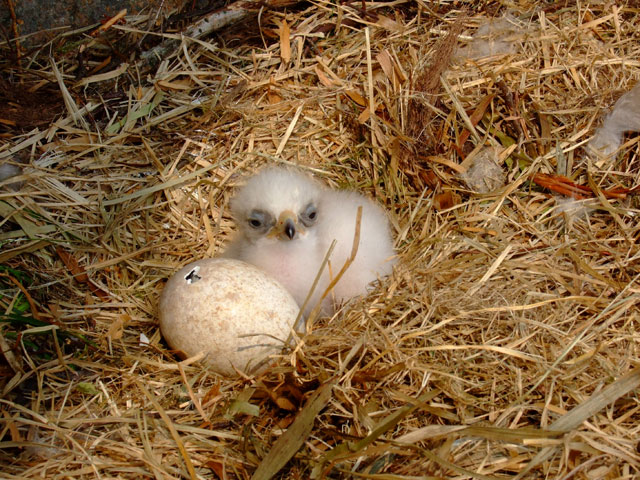 A wild Golden Eagle chick has hatched in Donegal for the first time in 100 years. Golden Eagles last bred in Glenveagh, Donegal in 1910 and became extinct in Ireland after the last breeding attempt in County Mayo in 1912. The adult eagles were reintroduced into Glenveagh National Park as part of the Golden Eagle reintroduction programme, which commenced in Glenveagh National Park in 2001. The Golden Eagle Trust Ltd and the National Parks and Wildlife Service are managing the project. The project began with funding from the National Millennium Committee in 2000 and has been funded since by EU LIFE, the Department of the Environment, Heritage and Local Government, the Heritage Council and others.

Golden Eagles first nested and laid eggs in Donegal in 2005 and again in 2006 but this year's nest has produced young for the first time. The nest is in a remote area within the boundary of Glenveagh National Park. The exact location of the nest has not been revealed to the public in order to minimise disturbance to the birds. The project team have requested that visitors to the Park do not seek out the eyrie.

The nest hatched two chicks but as normally happens the second chick died after five days. There will be a further nervous wait of 7-8 weeks to see if the remaining chick can continue to grow and hopefully fledge in late July.

The breeding adults were collected as chicks, under licence from Scottish Natural Heritage, from the Highlands of Scotland. A total of 46 eagles has so far been released. The breeding female in Glenveagh was collected in 2001, from Assynt in Sutherland. She nested elsewhere in Donegal in 2005 but her single egg did not hatch and she failed to breed in 2006. The male was collected from the Isle of Skye in 2002. He established his territory in Glenveagh in the autumn/winter of 2005 and built a nest on his own in 2006. The pair was first spotted together on the 1st August 2006 and they have been together since.

Despite the setback of losing a breeding male last winter from the two breeding pairs in 2006, Golden Eagles have shown tentative signs of re-establishing themselves in Donegal. A second pair also laid eggs in 2007. Three other young pairs were seen in further locations and hopefully will establish territories in the coming years. A single male defended a sixth territory this year. A single sighting of a pair of eagles in Connaught may also be the first putative sign of birds spreading outside of Donegal. 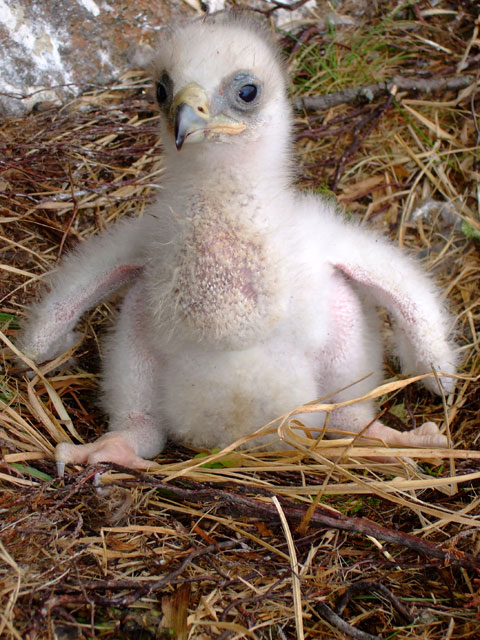 Dick Roche, Irish Minister for the Environment, said that he was delighted with this news. "While it is still very early along the way, this is a marvellous milestone as we try to re-establish the golden eagle as part of Irish biodiversity," he said. The Minister paid tribute to all of the people involved in the project, including the Golden Eagle Trust, staff of the National Parks and Wildlife Service, farmers and landowners and many eagle enthusiasts in Ireland and Scotland who had helped the project. "This gives me great hope for the success of the White-tailed Eagle and Red Kite Reintroduction Projects, both of which involve the Golden Eagle Trust Ltd and my Department."

The project manager, Lorcán O Toole, from the Golden Eagle Trust Ltd, said, "Having a Golden Eagle eyrie with a chick in Ireland was not unusual prior to the late 19th century, as they were a feature of our natural and cultural heritage for millennia. This little chick is another positive step in our ongoing work to see these magnificent birds firmly re-established in Donegal and down the west coast of Ireland. Maybe it is another sign that we are rediscovering our traditional respect for our landscape. The eagle restoration project has been an inclusive effort on the part of a large number of people for over a decade now. But special thanks must be paid to the hill sheep farmers and the wider community in the Hills of Donegal, who have steadfastly supported the project."

Roy Dennis, Director of Highland Foundation for Wildlife, commented "I was involved in looking at the suitability of the Glenveagh National Park a long time ago and I'm absolutely delighted that this very bold project has been a success. It's just fantastic news and we, in Scotland, who have helped the Irish project are so pleased the Scottish chicks have thrived and prospered. The success of this project provides real hope for their new plans to reintroduce White-tailed Eagle and Red Kite to Ireland."

The Golden Eagle Reintroduction Project has released 46 Birds in Donegal between 2001 and 2006. Young chicks were collected from nests in Scotland and reared in avian cages, without human contact, for a further 5-7 weeks before being released.

Radio tracking has enabled the project team to track the young birds as they disperse. One of the chicks fitted with a satellite tag in 2005 has been tracked over the last few years and has spent some considerable time in the Sperrin Mountains, Northern Ireland and in Ballycroy National Park in Mayo. This bird has been recorded in Donegal, Derry, Tyrone, Fermanagh, Leitrim, Sligo and Mayo.

The Golden Eagle donor stock was collected from Scotland under a special licence from Scottish Natural Heritage. Only one chick can be collected from nests containing two young. Every year scores of bird of prey enthusiasts help monitor potential donor stock nests. The Scottish Raptor Study Group, the Highland Foundation for Wildlife, the Forestry Commission, the National Trust for Scotland, and the Royal Society for the Protection of birds have all played a key role in collecting young. The Irish Golden Eagle Reintroduction Steering Group would also like to thank all the Scottish landowners, deer stalkers and gamekeepers who have supported the project to date.