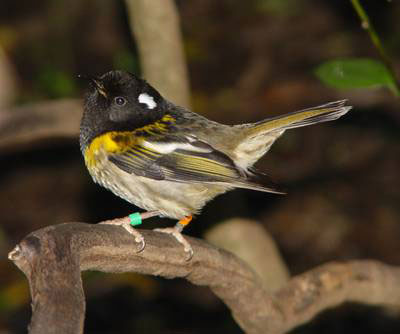 Stitchbird Notiomystis cincta: One of the threatened species known to have a male-biased sex ratio (photo: Stefan Greif).

A new study published in the leading ornithological journal Ibis has uncovered that for the vast majority of bird species, there are more males than females. The discovery suggests that populations of many of the world's threatened birds could therefore be overestimated, because scientists often base population estimates on counts of males.

Males are usually more brightly plumaged than females and the males of many species sing to attract mates and defend territories making them easier to hear and therefore count. Researchers then take this as an estimate of the number of breeding pairs, critically assuming an equal number of males and females in the population. But is this assumption a valid one? This study suggests not.

After carrying out a comprehensive review of hundreds of scientific papers, Dr Paul Donald of the RSPB (BirdLife in the UK) concluded that in the majority of bird species studied, there are more males than females.

"Most species have male-skewed sex ratios, but a wholly unexpected finding was that the rarer the species, the more highly skewed towards males the population sex ratio becomes," said Dr Donald. "This means that many of the world's rarest species may be much closer to extinction than we previously thought, because the number of females is lower than the number of males. It is much easier to save a population with an excess of females than one with an excess of males."

As to why this should happen: "It’s not that females are producing more sons than daughters, because at hatching the sex ratio is generally equal. The only possible explanation is that females do not live as long as males," Dr Donald added. "As generations grow older, they become increasingly dominated by males as more females die off."

One possible explanation for this higher female mortality is that females may experience higher physiological stress. In many bird species females are the dispersing sex while the males stay closer to home and in migratory species it is often the females that fly the furthest despite being smaller in size.

Referring to the paper, Donald outlined the reason why more threatened species have such strongly skewed sex ratios: "One possible explanation is that many threatened species are endangered because of introduced predators, which have been shown to kill females when they are incubating eggs in the nest."

Backing up Dr Donald's argument, some studies have found that populations of threatened species in New Zealand have reverted back to a more balanced sex ratio after predators were removed.

Because most bird population estimates are likely to be overestimates, it is crucial that researchers take the sex ratio into account when devising strategies for saving globally threatened species.