An increasing number of new moth species are arriving and settling in the UK as a result of the global reach of the horticultural trade and the changing climate, moth experts have revealed. According to wildlife publisher Atropos and charity Butterfly Conservation, almost 30 new species of pyralid moth have been recorded in the UK in the last 30 years, with eight becoming established residents.

Pyralid moths include some of the largest and most distinctive of the 1,600 species of micro-moths found in the UK. Around 900 species of the generally larger and better known macro-moths are also found here. 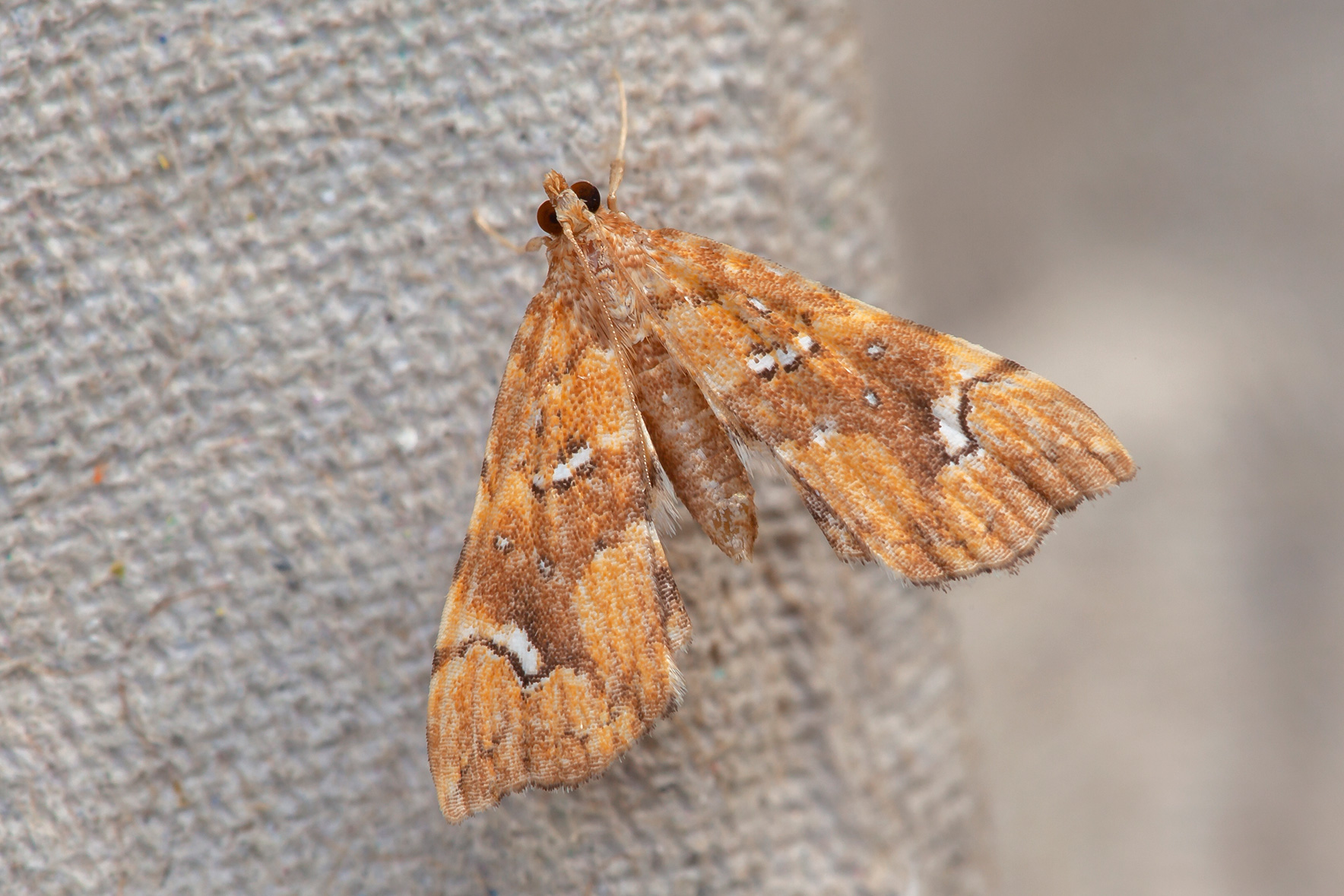 Musotima nitidalis, originally from Australia and New Zealand, is thought to have arrived in the UK in 2009 as a result of the horticultural trade (Les Hill).

The North Sea and English Channel provide a natural barrier to many potential colonising moth species, but the horticultural trade can provide a route into the UK, with eggs, caterpillars or even pupae hitching a ride on imported plants. Climate change is also altering conditions, enabling moths to take advantage of habitats in new areas. This recent increase in new species comes at a time when many of the UK's native moths are in decline as a result of habitat loss and agricultural intensification.

As part of this year's Moth Night, an annual UK-wide event to record and celebrate moths, organisers Atropos, Butterfly Conservation and the Centre for Ecology and Hydrology are asking the public to look for pyralid moths in their gardens, the countryside and at specially organised moth trapping events.

Pyralids are often under-recorded, so scientists need new reports of sightings both to determine how these moths are faring across the UK and to spot any new species that have arrived.

Musotima nitidalis, originally from Australia and New Zealand, is thought to have arrived in the UK in 2009 as a result of the horticultural trade. The moth is now found in several locations in southern England, where its caterpillars feed on ferns such as bracken. Many of the recent pyralid colonists have arrived naturally, probably assisted by climate change, including the beautifully coloured Evergestis limbata. This species has now settled along the south coast of England after first being recorded in 1994.

Easy-to-see native pyralids include the day-flying Mint Moth, which can be found in garden herb patches as well as open grassland habitats. The distinctive black-and-white Small Magpie and Mother of Pearl, which sports a pearly sheen on its upper wings, can also be found in gardens or near nettle patches. Common migrants to look out for included Rush Veneer and Rusty-dot Pearl. Another group of pyralid moth, the China-marks, are found in wetlands, their caterpillars living in an air-filled bubble of spun leaves at or just under the water's surface in ponds and at the edges of streams.

Several pyralids are rare and threatened in the UK including White-spotted Sable, a declining species of woodland glades and hillsides, and the Scarce Crimson and Gold, which is thought to occur in sand dune habitats in Northern Ireland; it still survives on the Isle of Man, having been lost from England and Scotland. 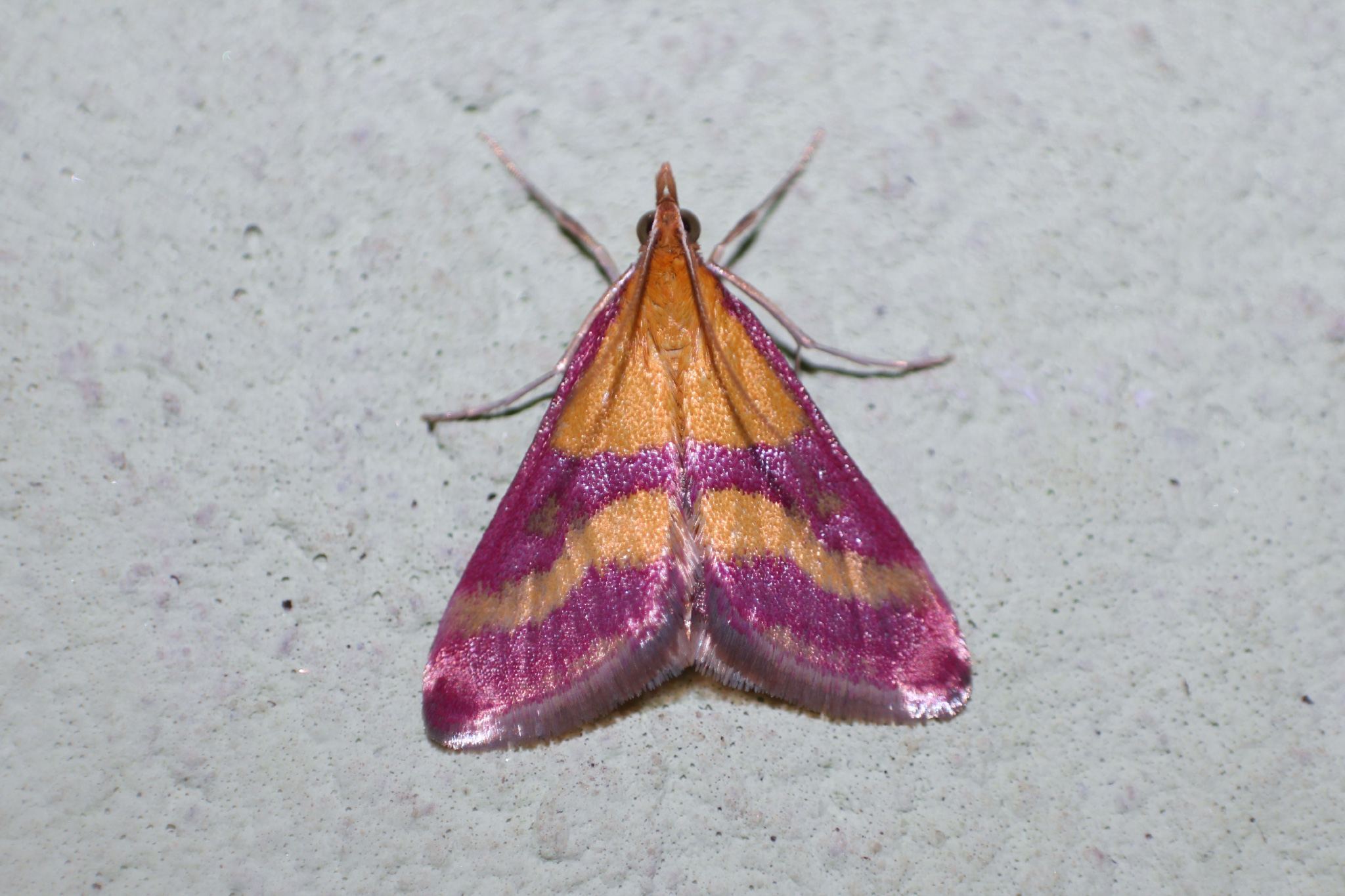 Butterfly Conservation Associate Director of Recording Richard Fox commented: "This year for the first time Moth Night is focusing on a fascinating group of micro-moths.

"Moths are often portrayed as boring, brown and impossible to identify, but pyralids explode these myths with simply stunning species such as the Scarce Crimson and Gold and amazing life histories, such as the Beautiful China-mark, whose caterpillars live under water."

A new guide to pyralid moths, the Field Guide to the Pyralid and Crambid Moths of Britain and Ireland, will be published by Atropos later this year. Editor Mark Tunmore said: "This book has long been in the making and is the first comprehensive work on the British pyralid moths for almost 35 years.

"There has been a huge amount of change in that period, not least in the amount of interest that people now have in moths. New species are being added to the British list with regularity and we want to make sure that people are well equipped to identify these. We expect Moth Night 2018 to add to our knowledge of this group of moths."

Marc Botham, ecologist at the Centre for Ecology and Hydrology, added: "Pyralids are a captivating but relatively poorly known group of moths. The three days and nights of Moth Night 2018 are an ideal opportunity to search for them in your garden or further afield, including at organised events. By submitting your sightings via our website you are helping with research to understand the status of UK wildlife."

Moth Night 2018 runs from 14-16 June and will include moth trapping events across the UK. To discover a Moth Night event near you go to www.mothnight.info.