A gamekeeper formerly employed on the Leadhills Estate in South Lanarkshire was this week [17th November 2010] convicted of laying a rabbit bait laced with the banned poison Carbofuran on an open hillside. Lewis Whitham, now of Skipton, North Yorkshire, appeared at Lanark Sheriff Court, and pleaded guilty to placing a poison bait, contrary to section 5 1 A of the Wildlife and Countryside Act. He was fined £800. The court heard that on 8th April 2009, Whitham was witnessed driving a quad bike on Braid Hill, near Leadhills, by a Field Research Officer from OneKind. He was seen to stop the bike and take a dead rabbit off the back of it. This was staked to the ground and sprinkled with "a significant quantity" of Carbofuran. 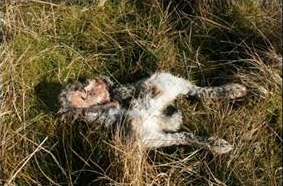 In mitigation, the court was told that Whitham was trying to impress his employers, but that there was a high population of crows in the area. He accepted that what he did was "quite wrong" and was fully aware that Carbofuran should not be used. He also accepted that the use of a poison bait was indiscriminate. Sheriff Stewart said that gamekeepers have special responsibilities to the environment, and that this was contrary to the standards expected.

Bob Elliot, RSPB Scotland's Head of Investigations, welcomed the conviction: "Cases of illegal poisoning are difficult to detect, but it is shameful that incidents like this continue to be discovered. 2009 was the worst year we have recorded for illegal poisoning incidents, but this only recognises those incidents that were actually found. These illegal and very toxic chemicals endanger some of our most iconic and protected species; the reckless and indiscriminate nature of these offences regularly kill birds such as Red Kites and Golden Eagles, as well as domestic pets, attracted to what is apparently a piece of carrion lying on a hillside."

"The Scottish Government has recently announced an amendment to the Wildlife and Natural Environment Bill, currently passing through the Scottish Parliament, which is designed to prosecute landowners who allow their employees to commit wildlife crime on their land, including illegal poisoning. We hope that this measure will be supported by all those who wish to see an end to the illegal killing of birds of prey in Scotland and it is strongly welcomed by RSPB Scotland."