Three Red Kites have recently been found illegally poisoned in a blow to efforts to re-establish a thriving population across North-East England.

One found near a grouse moor died from Carbofuran poisoning despite the use of the chemical being banned in Britain since 2002. The two others were found together and died as a result of poisoning by Aldicarb, a widely-used pesticide which has been implicated in deliberate poisonings elsewhere in Britain. The bodies of all three were recovered and sent for post-mortem examination after tip-offs from the public.

The three deaths, revealed by Friends of Red Kites (FoRK), the voluntary group set up to protect and monitor the population, brings the region's total number of known kite casualties from illegal poisoning to ten in recent years. 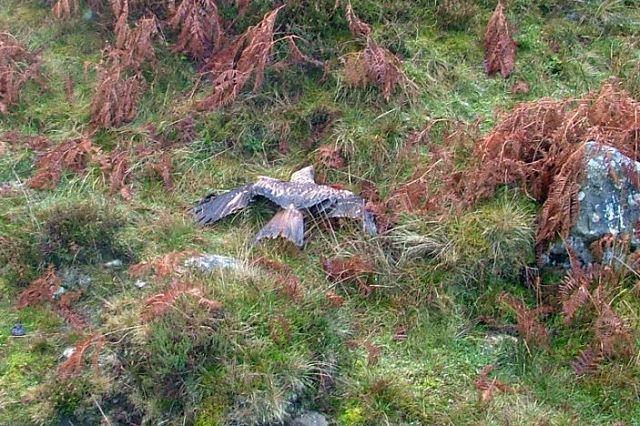 One of the poisoned Red Kites.

FoRK has condemned the killings but fears that the known deaths are just the tip of the iceberg and that many more dead birds are never found. It believes that persistent persecution, mainly through illegal poisoned baits, is among factors preventing the birds from spreading from their core Derwent Valley sites.

The bird killed by Carbofuran was found near Edmundbyers, Co Durham. The two others were found at High Spen, Gateshead, and included a wing-tagged female from a nearby breeding site which had produced young for the previous four years.

Previous poisoning involved two kites found dead in Hexhamshire and a breeding pair killed near Whittonstall whose chicks then perished in the nest. Other local kites were found poisoned in Teesdale and Wharfedale, Yorkshire. Another bird, which moved to Scotland, was found poisoned in the Cairngorms. Other kites have been found in suspicious circumstances but have been dead too long for scientific examination.

Allan Withrington, FoRK Kite Welfare Officer, said: "These poisonings are appalling and totally unacceptable. Carbofuran has been illegal in this country for many years but is still apparently the poison of choice of those who illegally put out poisoned baits to target raptors, crows and foxes.

"Leaving poisoned baits in the open is not only illegal but completely indiscriminate as the deaths of many bird and animals, including dogs and cats, has shown over the years.

"We will be continuing to do everything possible to expose those responsible and work with the police, farmers, landowners and other conservation organisations to protect the red kites and other species."

The most recent available figures from the RSPB show that there were 76 confirmed cases of illegal poisoning in Britain in 2013, including 19 from Carbofuran and 5 from Albicarb. Twenty-one Red Kites were among the victims which also included Common Buzzard, White-tailed Eagle, Golden Eagle and Marsh Harrier. Raven, Magpie, Sparrowhawk and even a Collared Dove also died along with two dogs and two cats.

Britain's single worst recorded wildlife poisoning incident occurred in April 2014 with red kites being the main victims. 16 kites and six buzzards were found dead near Inverness. Despite a major investigation by Police Scotland and rewards totalling £32,000 being offered no-one has been charged.