Further calls for anti-bird netting to be removed

Bridgwater residents have demanded that anti-wildlife netting is removed from hedges near a new housing development. Yarlington Housing Group is building 37 properties on a former playing field near Bridgwater College Academy, but locals have criticised plastic nets and have pointed out that it will harm nearby populations of birds and bats. 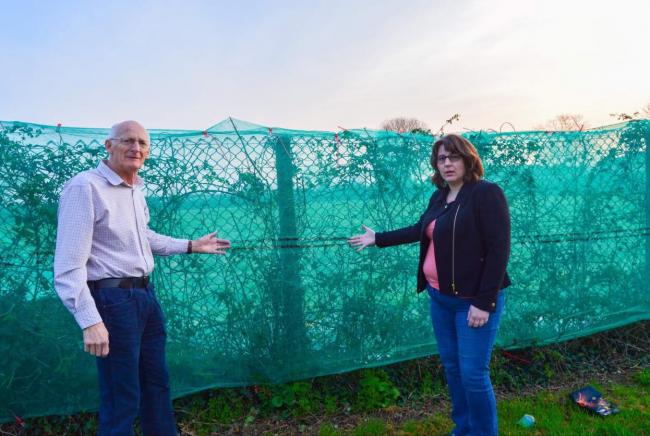 Baker and Nicholls stand by the netting (Bridgwater Mercury).

They wrote: "There is no mention of [Yarlington's] intention to use the netting in any ecologist reports submitted to the council. The site's hedgerow boundaries are considered to be of local value to a range of breeding bird species. All of these hedgerows form shaded dark areas in comparison to the surrounding well-lit suburban landscape, and potentially support substantial numbers of invertebrates, therefore acting as an attractant to the bat species known to use the site.

"The development will result in the loss of the amenity grassland, and approximately 120 metres of the hedgerow habitats present on site. The loss of this amount of habitat, in the absence of mitigation, is likely to have an adverse impact on commuting and foraging bats."

Sedgemoor District Council proclaimed that Yarlington was not breaking the law or planning condition by doing so, and a spokeswoman commented: "There is no breach of the planning permission. It is the responsibility of the developer to check any netting three times a day if they put it up.

"If it is deemed there is a breach of the Wildlife and Countryside Act, it would be a police matter. It is not known as good practice to put netting up, but not illegal."

Yarlington has stated it is committed to protecting wildlife near its developments and that it would work with its contractor and the council to resolve any issues. A spokesperson said: "We take the protection of wildlife that may be affected by our developments very seriously.

"Bird netting is installed in hedgerows at building sites to discourage wildlife from inhabiting them and encourage them to nest elsewhere. The netting is then monitored to ensure no birds are trapped or have attempted to nest."