Fresh hope for one of world's rarest raptors

A new study by conservation experts in the UK and Mauritius will guide the next steps in the recovery of a tropical bird of prey, once regarded as the rarest bird in the world.

After it was discovered that only a handful remained in the wild in the early 1970s, Mauritius Kestrel became the focus of an ongoing restoration programme. The project saw scientists and conservation biologists from around the world come together to reintroduce the threatened species, in a bid to bring it back from the brink of extinction.

Now in new research published this week, scientists have analysed decades of monitoring data from the programme, which has provided a comprehensive insight into the kestrels' survival and breeding rates – revealing how successful the reintroduction has been on the Indian Ocean island. 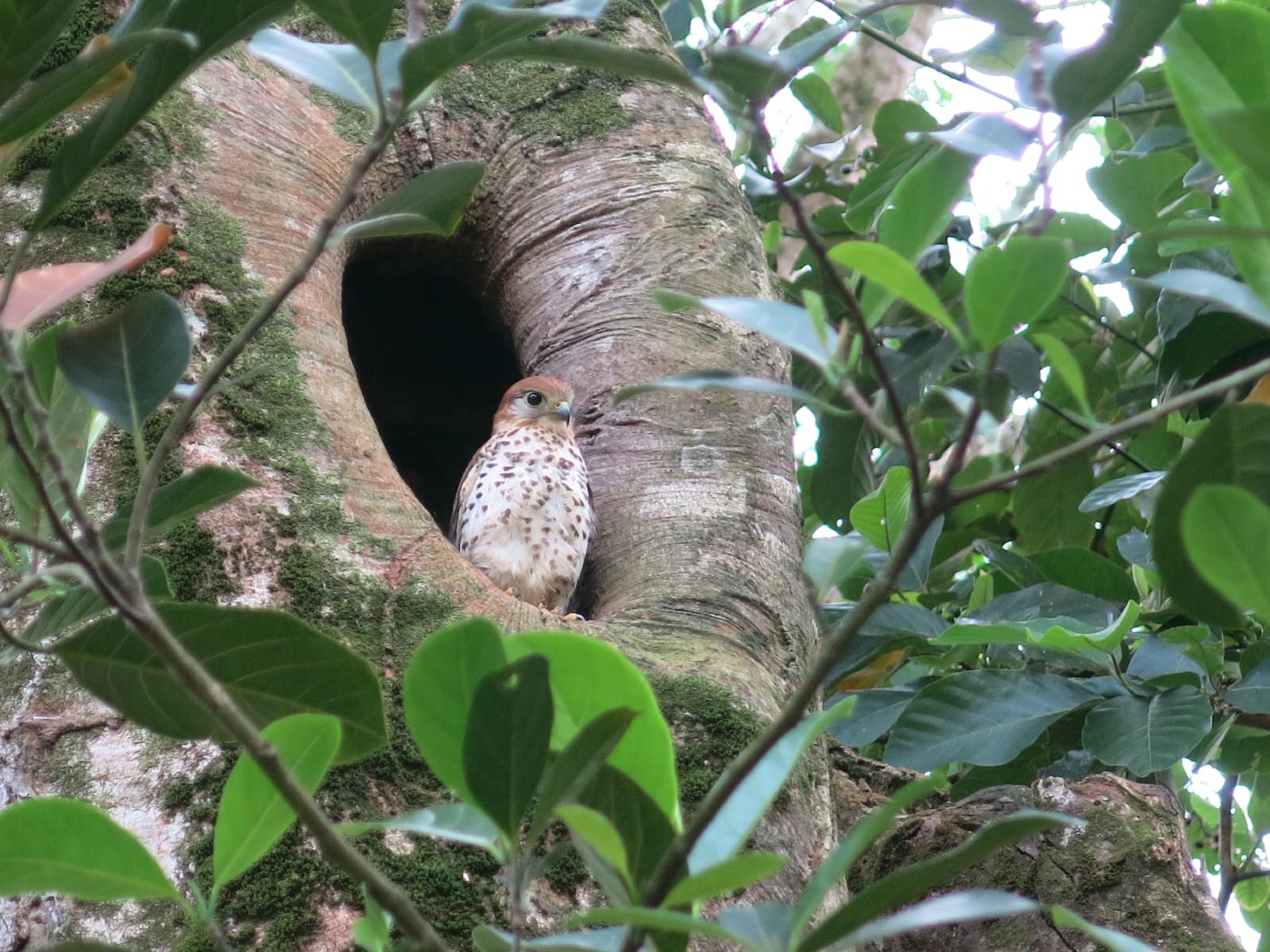 A Mauritius Kestrel at its nest site. The species has fared better in some areas of Mauritius than others in recent years (Malcolm Nicoll / ZSL).

Conducted by a team of scientists from the Zoological Society of London (ZSL), Mauritian Wildlife Foundation, Durrell Wildlife Conservation Trust, Durrell Institute of Conservation and Ecology, The Peregrine Fund, and supported by the Government of Mauritius, the research's findings provide valuable evidence which can be used to guide the next steps in the recovery of the native predator, once widely distributed across the country.

Mauritius Kestrel numbers originally declined due to extensive habitat loss and the widespread application of insecticides to control malarial mosquitos and pests in agricultural systems. By the late 1950s, it was restricted to the remote Black River Gorges and, by 1974, numbers had fallen to just four known birds in the wild.

The original restorative programme involved captive-bred birds which were reintroduced into four mountain ranges across the island. Following long-term management of the newcomers which included help with feeding and nest sites, the Mauritius Kestrel population grew to an estimated 350-400 individuals by 2000, and was downlisted to Vulnerable on the IUCN Red List of Threatened Species. However, recent evidence has shown that the species is once again in decline, and it was upgraded to Endangered in 2014.

Senior Research Fellow at ZSL's Institute of Zoology and project lead, Malcolm Nicoll said: "The Mauritius Kestrel Restoration Programme has long been seen as one of the most successful bird recoveries in the world. Reintroducing a species is a complex, long-term process, and the evidence the team have collected here will be instrumental in helping us to understand what has worked, and just as importantly, what hasn't worked for these birds."

For more than 20 years, researchers studied the four reintroduced populations, with their results revealing that each population had varied success. For example, the population of kestrels on the eastern side of the island were found to be thriving, with more than 50 monitored pairs, while the population in the north had declined and eventually completely disappeared by 2007.

Dr Vikash Tatayah, Conservation Director for the Mauritian Wildlife Foundation, said: "Mauritius Kestrel is one of several species of birds that we have saved from extinction, and our proudest bird rescue success. However, it is still far from easy. We are battling with over four centuries of human colonisation, development, habitat loss and degradation, and invasive species.

"Thanks to very close monitoring spanning over four decades undertaken by ourselves and our partners - including ZSL - we are able to tease apart overall population trends from trajectories at more local levels. This allows us to understand localised population declines and to take corrective measures at both these regional scales, and to further improve the kestrel population management overall." 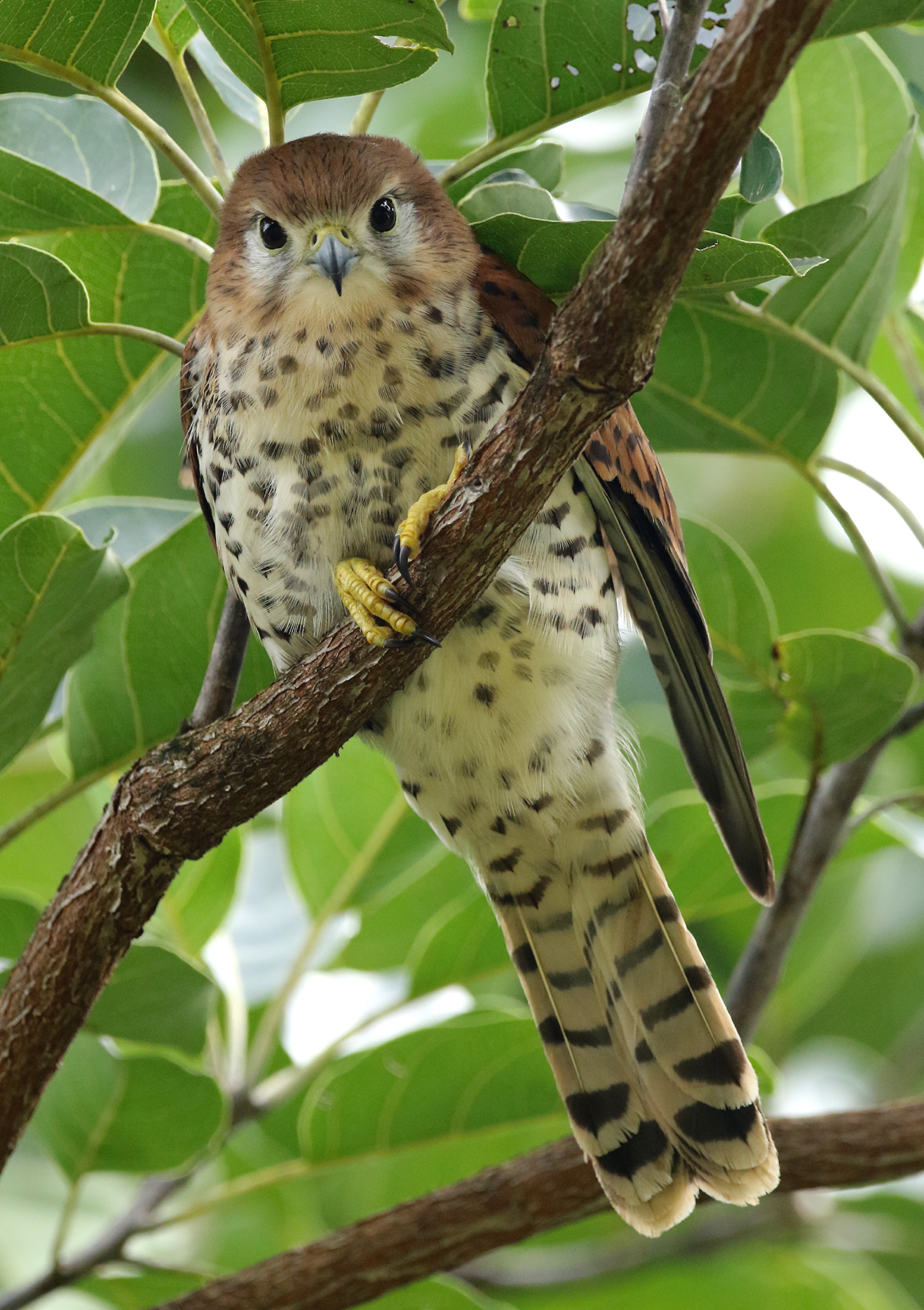 After reaching a peak of around 400 birds in the early 2000s, the Mauritius Kestrel population has fallen again in recent years (Jaz).

Nest sites in each population were also regularly monitored as part of the programme. Kestrels nest in cavities in cliffs and trees, but there is a shortage of natural nest sites in some areas of Mauritius, due to habitat loss. Artificial nestboxes designed specifically for the kestrels were set up, and the teams found that in some cases, the birds bred more successfully where boxes were provided.

Professor Jones said: "Conservation work for the Mauritius Kestrel involved a whole range of innovative techniques to breed the species in captivity and to reintroduce them into the wild. Once reintroduced the birds were carefully cared for, provided with nestboxes, given extra food, predators were controlled, and the breeding pairs were nurtured to ensure they raised the maximum number of young. This work was continued until the birds had become re-established.

"We now know from this study that we should have continued this care for longer, to ensure the populations continued to flourish. It clearly demonstrates the importance of managing free-living populations of an endangered species and provides an important example of how we need to look after and monitor the most vulnerable species."

In recent years, the reintroduction programme has been revived to help alleviate a declining population of kestrels in western Mauritius.

Dr Nicoll concluded: "This project is a great example of conservation scientists in Mauritius and elsewhere, working with zoo experts to help reverse species decline. This combination of expertise has been invaluable, and we hope that the research findings will help us understand how to best support the recovery of the Mauritius Kestrel for years to come."

The team will continue to closely monitor the progress of the kestrel populations, and the findings of this study will be used to inform the next stages in the long running programme of bringing Mauritius Kestrel back from the brink. You can support ZSL's world-leading conservation work by donating online at www.zsl.org.