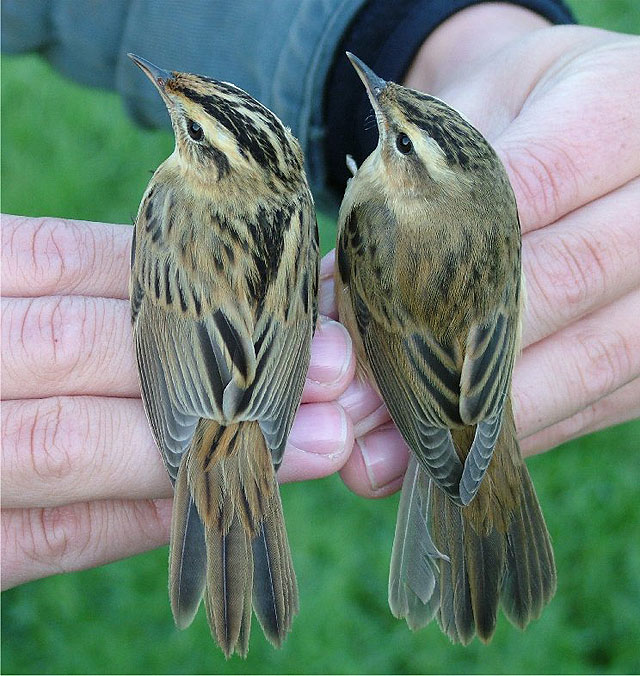 The majority of Aquatic Warblers, migrating from their breeding grounds in Europe, use "stopovers" in wetlands in north-western France to build up their strength before their onward journey to Africa.

The authors of the paper 'Autumn migration route of Aquatic Warbler' (Ibis 148, 735-743) identify the Seine and Loire estuaries as priority sites, with some smaller wetlands in Brittany receiving large numbers when eastern winds predominate at the peak of migration.

They write that post-breeding migration through France takes place through the entire summer, but peaks in the third week of August. "The species seems to fly quickly to France, where it concentrates...it is likely that part of the population departs directly from stopover sites in France to winter quarters in Africa without additional stops in Europe".

In this respect, they say Aquatic Warbler's migration strategy is closer to that of Sedge Warbler than Reed Warbler. Sedge Warblers depart early, and most fly to West Africa in a long stage from feeding grounds in northern France or southern England. Reed Warblers go later and more slowly, breaking their journey in Spain or Portugal to refuel before crossing the Mediterranean.

France has designated 30 Special Protection Areas where Aquatic Warbler is mentioned on migration, including Baie d'Audierne, Basse Seine estuary and marsh, Baie de Goulven, Baie du Mont St Michel and Estuaire de la Gironde. None of these were specifically designated for Aquatic Warbler. But in Brittany, a project funded by the EU's LIFE (Financial Instrument for the Environment) programme is working to increase the amount of favourable habitat by restoring reed marshes and controlling land use.

The experience derived from the LIFE project will be shared through workshops, booklets and websites to support an inter-regional conservation strategy for this Vulnerable species.