A 40-ha site of former farmland has been re-planted with wild flowers that have attracted thousands of insects.

Having been a farmer for 65 years, Alan Ellis decided to diversify in retirement, and now the hectares he owns near Ivybridge, Devon, are full of cornflowers, poppies and daisies. 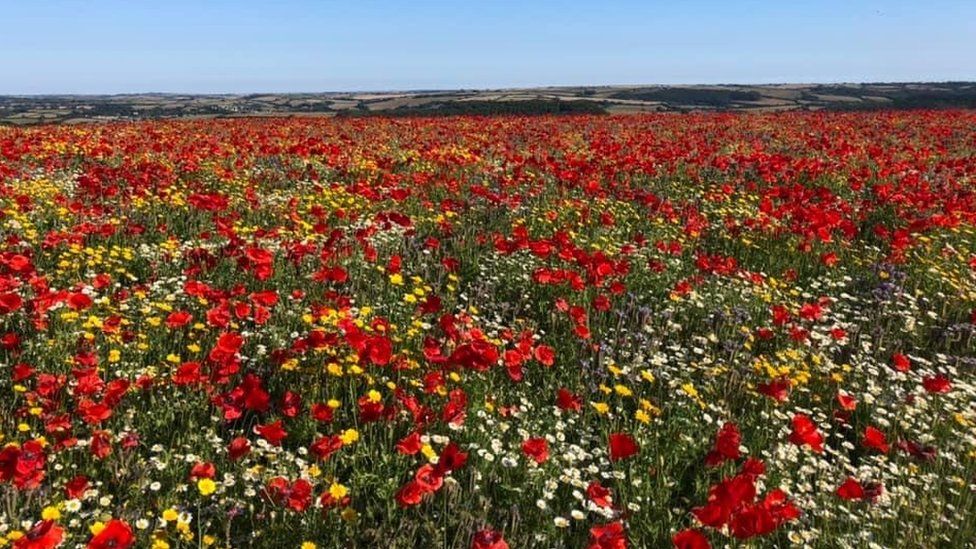 The wildflower field is filled with native species (Dion Johns).

Mr Ellis said he didn't expect the venture to be "so exciting". Flower expert Amelia Cooper-Smith said the fields were "massive nectar hotels" for all sorts of different pollinators.

He said: "I very often wonder what other farmers must think of me; they must think I've gone mad, which I probably have. I feel it's a probably something most farmers would think is a strange thing to be doing. I didn't expect it to be so exciting."

On visiting Mr Ellis's wildflower field Amelia Cooper-Smith, of Amelia's Flower Farm, said she had "never seen anything so beautiful". She said: "What Alan has achieved is absolutely incredible, so beautiful, and the amount of life that I can see just in this small area here is unbelievable.

"I've never seen it achieved on this scale, and to have it in Devon is just incredible."

Ms Cooper-Smith noted how many of the species planted in the fields were native, meaning they were more likely to survive in the soil and weather conditions. She said it was incredible the flowers were resilient enough to thrive given the recent dry spell.

"They're really good at coping with the soils and with the climate they're growing in, and so naturally, they want to grow really fast and flower, because they're annual flowers, which is why they're just putting on this amazing show," she said.

"You don't need to use any pesticides, they're just going to grow for you, so there's nothing here that the insects are going to come across as a barrier, so they're just massive nectar hotels for all sorts of different pollinators."