Deforestation since the turn of the century has driven at least 500 species of mammal, bird and amphibian closer to extinction, according to a newly published scientific study.

"We measured the extent and change in tree cover between 2000 and 2012 within the distributions of over 11,000 forest-dependent birds, mammals and amphibians," said lead author Lukasz Tracewski of the University of Wroclaw, Poland. "We then applied these data to assess the potential implications for the extinction risk of these species in terms of their status on the IUCN Red List, which is the most widely used objective framework for assessing species' extinction risk".

This study found that in the vast majority of cases the species with an increased extinction risk are those which now have highly restricted areas of occupancy, resulting from little forest cover remaining within their ranges.

Co-author Dr Stuart Butchart, Head of Science at BirdLife International and IUCN Red List Steering Committee member, noted: "The results were pretty shocking, with the overall proportion of species of conservation concern potentially increasing by 15 per cent for birds, 25 per cent for mammals and 33 per cent for amphibians.

"The total numbers of species affected include [up to] 490 amphibians, 253 birds and 135 mammals, with the estimates including Data Deficient species for which we are less certain about their distributions."

Examples for potential 'uplisting' include Long-tailed Parakeet, which lost 17 per cent of the forest within its range in Indonesia and Malaysia during 2000–2012, uplisting it from Near Threatened to Vulnerable. 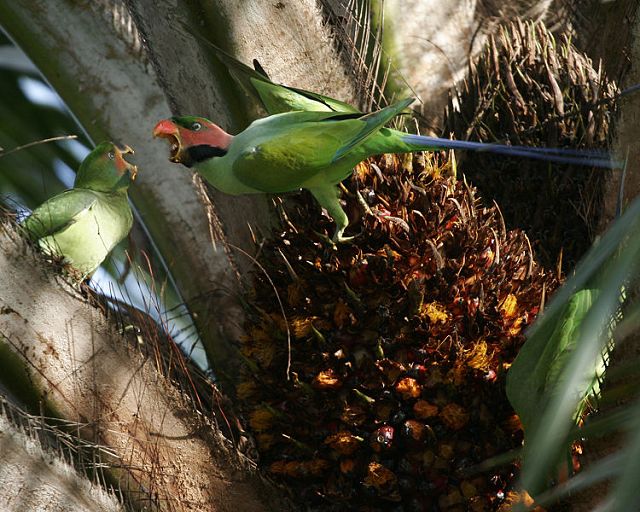 Long-tailed Parakeet was already considered Near Threatened but my be uplisted after new research (Photo: Lip Kee/wiki commons)

Hotspots with the greatest numbers of affected species include Central America, the Northern Andes, Madagascar, the Eastern Arc forests in Africa and the islands of South-East Asia.

"This is exactly the kind of planetary-scale environmental research we hoped to support when we built Google Earth Engine," said Dave Thau, manager of developer relations for Earth Engine at Google. "We've done our best to put vast amounts of data and tools for analysing it into the hands of researchers who can use it. BirdLife International and its collaborators have put those tools to great use, turning data into knowledge, and helping the world better understand the environmental challenges we are facing."

"Our study illustrates the potential value when Google's cloud-computing technology is combined with vast datasets of high-resolution satellite imagery, and the power of such technology to inform conservation," said co-author Dr Graeme Buchanan of the RSPB. The results show that the extinction risk for many species of tropical forests is even greater than was previously thought.

"This highlights the urgency of tackling the drivers of deforestation and effectively conserving important areas of remaining forest, in particular the Key Biodiversity Areas upon which many of these threatened species depend," added Butchart.